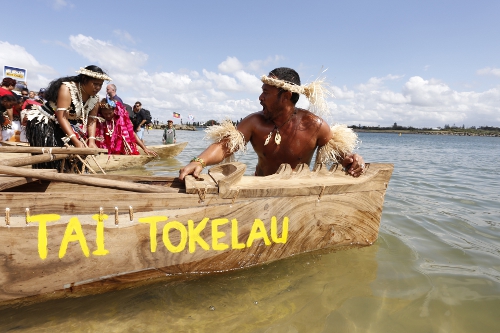 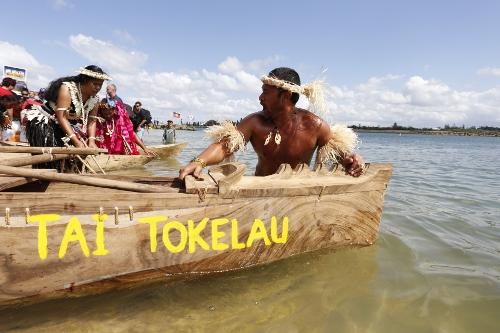 Since international climate negotiations began a quarter of a century ago, annual greenhouse gas emissions have increased by 60 per cent.

As we approach yet another climate summit this November in Paris, the question for the climate protection movement is not just can some kind of agreement be reached, but how can we reverse the continuing climate catastrophe over the next quarter-century?

Last November, the two largest greenhouse gas polluters, the United States and China, reached a widely-touted deal. The former would reduce its emissions by 26–28 per cent by 2025, while the latter would cap its emissions around 2030.

Cambridge University number cruncher Chris Hope concluded that if the European Union countries cut emissions by 40 per cent by 2030 (as they have pledged), if the rest of the developed countries follow the US commitment, and if the developing countries follow China’s promise, the most likely result will be a global temperature rise of 3.6 degrees Celsius in 2100.

The chance of staying below the 2 oc increase – which scientists say is the maximum compatible with human civilisation as we know it – is barely one in a hundred.

In short, this means the governments of the world are prepared to destroy the basis for human life on Earth – unless the people of the world stop them.

The time from now to the Paris summit can play an important role in developing the power and conviction we need to do so.

In the global climate actions last September, people in 162 countries joined 2,646 events to demand global reductions in the greenhouse gas emissions that are generating climate catastrophe. An estimated 40,000 marched in London; 30,000 in Melbourne; 25,000 in Paris. Some 400,000 joined the People’s Climate March through the centre of New York City.

Continued exponential growth people protesting is essential, but people power is not just a question of numbers. The movement worldwide has turned to direct action using the tactics and traditions of civil disobedience.

Under constitutional principles recognised in the law of many countries, known in the United States as the ‘public trust doctrine’, governments are required to act not as owners of essential natural resources, but as trustees for the real owners: the people. They have the highest level of duty to protect those assets. They have no right to authorise their destruction.

While courts established by governments dominated by fossil fuel interests are likely to deny it, there is a commonsense constitutionalism that makes this clear.

In the United States and other constitutional systems, powers not given to government are reserved to the people. And what constitution in the world grants government the right to destroy the natural conditions on which human life depends?

Any agreement governments sign at the Paris climate summit is likely to authorise the continued destruction of the global public trust. Yet, they have no right to provide such an authorisation.

Indeed, they have no more right to authorise its destruction than the trust office of a bank has to loot the assets placed under its care. Conversely, the people of the world have a right to our common heritage. We have a right, if necessary, to protect our common assets against those who would destroy them.

As the November Paris summit approaches, climate activists all over the world are considering how to relate to it.

If they denounce the international climate negotiation process, they are likely to weaken the one arena dedicated to long-term global solutions to the climate crisis. But if they support the process they are likely to be endorsing outcomes that will still mean the devastation of the planet.

While some will no doubt lobby the delegates, and others may try to disrupt the negotiations, many are organising to confront governments around the world with the demand of the people for climate protection.

The constitutional duty of governments to protect the public trust, and the right of the people to make them do so, can be a valuable tool within this effort.

Indeed, it could play much the same role as the US constitution’s right to equality played for the civil rights movement, and the Polish government’s legal commitment to human and labour rights played for Solidarity.

In fact, the public trust principle is already being incorporated into climate protection action. On Earth Day in 2013, Alec Johnson (aka ‘Climate Hawk’) locked himself to a construction excavator in Tushka, Oklahoma, as part of the Tar Sands Blockade campaign to stop the Keystone XL pipeline. In a statement he prepared for the jury, he proclaimed on the basis of the public trust principle, ‘I wasn’t breaking the law that day – I was enforcing it’.

Although Johnson could have been sentenced to up to two years in the Atoka County jail, he received no jail time and a fine of just over $1,000. Johnson commented: ‘Together with the jury’s very light sentencing, the whole trial experience felt like a victory.’

In response to climate destruction, we are witnessing the birth of a global nonviolent constitutional insurgency.

After hearing their testimony, a judicial panel of respected movement figures concluded that ‘those who blockade coal-fired power plants or block tar sands oil pipelines are committing no crime.’

Rather, they are ‘exercising their right and responsibility to protect the atmospheric commons they own along with all of present and future humankind.’ They are acting to prevent a far greater harm – indeed, ‘a harm that by virtue of the public trust doctrine is itself a violation of law on a historic scale.’

The global climate protection movement does not need either to support or to block the Paris climate summit. It needs to raise the pressure on the governments and institutions of the world to stop authorising the destruction of the climate.

Through mass demonstrations, meetings and marches, through civil disobedience, and perhaps even through a proliferation of popular tribunals, the climate movement can utilise the power of the world’s people to begin forcing climate protection on the powers and principalities of the earth.

Will it be able to do so? As Gandhi once said of India’s struggle to free itself from British rule, ‘The matter resolves itself into one of matching forces.’

Historian Jeremy Brecher is the author of Climate Insurgency: A Strategy for Survival (Paradigm, 2015) and a co-founder of the US Labor Network for Sustainability.

A longer version of this article can be found on Waging Nonviolence:
www.wagingnonviolence.org