Nick Robins, The Corporation That Changed the World: How the East India Company Shaped the Modern Multinational 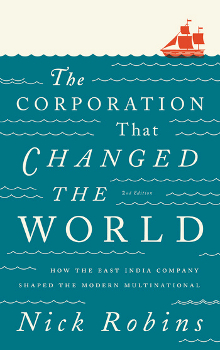 In the mid-18th century, the East India Company (EIC) accounted for half of the world’s trade, had its own army and enjoyed tax-raising powers over 10 million Indians. Yet, strangely, not a single London memorial exists to remember it.

The Battle of Plassey (1757) kicked off the EIC's takeover of a large swathe of Bengal. Company execs bought up and hoarded rice, contributing to huge famines throughout the 18th century. Robins cites an 1878 article from the Journal of the Statistical Society  that concluded that 'in the 120 years of British rule there [were] 34 famines in India, compared with only 17 recorded famines in the entire previous two millennia.'

In the 19th century, the Company resorted to drastic measures to stay afloat in the Chinese market, supplying and facilitating the illegal opium trade that precipitated the First and Second opium wars.

In its mania for market domination, the Company involved itself in ;immense crimes, safe in the knowledge that domestic and international remedies were not in place'. With a few exceptions, accusations of malpractice were easily dodged back in London. Underlying the ethical negligence was the structure of the EIC. Company execs were deliberately paid menial wages - but with employment came the 'privilege of private trade', and therefore rampant exploitation.

Nick Robins' writing is clear and to the point. And while this doesn't make for electrifying reading, there is plenty of room for revelation.

As the go-to man for so many neoliberal apologists, I had always imagined Adam Smith to have somehow created free-market dogma out of thin air. Yet Robins reveals that Smith was wholeheartedly opposed to monopolies of any kind, instead supporting the competition of smaller companies within a regulated playing field.

Smith laid into the so-called 'joint stock system', popularised by the EIC, for its absence of self-restraint and responsibility,  and for encouraging 'hazardous speculation'. Given Smith's huge reputation, 'it is shocking how his penetrating critique of the corporation has been so comprehensively suppressed', Robins notes. 'Nothing of his skepticism of corporations, their pursuit of monopoly and their faulty system of governance, enters the speeches of today’s neo-liberal advocates.'

There’s no doubt that as regards London, 'the erasure of the East India Company is highly suspicious'. Robins book urges us to remember, while holding today's global corporations to account.