David Edmonds, Would You Kill the Fat Man? The Trolley Problem and What Your Answer Tells Us about Right and Wrong 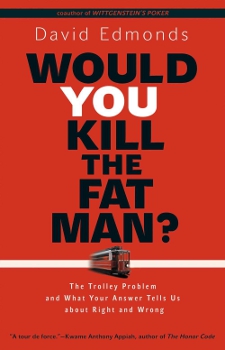 In 1956 Oxford University decided to award former US President Harry S Truman an honorary degree. Outraged at his role in the atomic bombings of Hiroshima and Nagasaki, philosopher Elisabeth Anscombe made an impassioned speech against the move, prior to the vote.

For her, killing the innocent as a means to an end was murder. 'If you give this honour, what Nero, what Genghis Khan, what Hitler, or what Stalin will not be honoured in the future?' she implored.

At least two others voted against the award. One of them - Anscombe's friend and fellow academic Philippa Foot – would later unintentionally launch a cottage industry in moral philosophy with her examination of the problem of when it is and isn't permissible to take action that leads - either directly or indirectly - to someone else's death.

Her 1967 paper 'The Problem of Abortion and the Doctrine of the Double Effect' introduced a minor variant of what is now known as the trolley problem. A runaway tram (a 'trolley' in American English) is hurtling towards five people tied to the tramline. By pulling a lever you can divert the tram onto a side track, saving the five. However, this will kill a sixth person (let us call him the 'Fat Man') who has been tied to this part of the track. Should you pull the lever?

The problem was subsequently given a major twist by Judith Thomson. As before, a runaway tram is hurtling towards five people tied to the tramline. But this time you are standing on a bridge over the track with a very fat man, whose girth is such that, were you to push him off the bridge and onto the line he would stop the tram before it hits the people tied to the track, killing him but saving the five. Your own body isn't heavy enough to stop the train (so jumping off the bridge yourself would serve no purpose). Should you push the Fat Man?

Both cases involve the forseen death of the Fat Man to save the five, but people's moral intuitions about the cases are usually at sharp variance.

Empirical research involving tens of thousands of people has shown that 80-90% of people think that one should pull the lever in the first case, but that a similar proportion think that it is wrong to push the fat man off the bridge in the second. Moreover, there appears to be 'no significant distinction between the [responses of the] rich and poor, the educated and uneducated, and those from the developed and the less developed worlds'.

Over the last thirty years, these intuitions, and how to account for them, have been studied intensively by philosophers.

Noam Chomsky has often stressed that one of our most basic moral principles is that 'individuals are responsible for the foreseeable consequences of what they do'. But the above examples strongly suggest that consequentialism – the doctrine that actions should be judged solely by their forseeable consequences – cannot be the whole story. On the other hand, the crucial question of self-deception regarding one's own intentions – an issue also often raised by Chomsky, and a significant problem for a non-consequentalist ethics – is left unexamined by Edmonds.

'Trolleyology' has spawned numerous subtle variations of the original problem. Edmonds considers at least eleven. For example, does it make a difference if the side track loops back round to reconnect with the original track from the opposite direction, so that the Fat Man's escape after you pull the lever would still lead to the death of the five? What if the person pulling the lever doesn't give a damn about the five, but pulls the lever because they hate the Fat Man and want to kill him?

One of the most disturbing, the Transplant case, doesn't even involve a tram. This time a man walks into a hospital at the precise moment that five patients are about to die for wont of organ transplants. Miraculously his tissue type is a perfect fit, and by killing him and harvesting his organs it would be possible to save the five. Is it morally permissible to kill him?

Psychologists and neuroscientists have also gotten in on the trolley game. For example, we now know that people with damage to the ventromedial prefrontal cortex of the brain 'are about twice as likely as normal people to say that it's acceptable to push the fat man to his death to save other lives', while another study found that increasing the levels of serotonin in the body made people 'less willing to kill the fat man'.

If all of this seems remote from real life (one critic has described the trolleyology literature, with its baroque principles and exquisitely fine distinctions, as 'mak[ing] the Talmud look like Cliffs Notes'), be warned.

It's all too obvious that ideas such as the Doctine of Double Effect (which holds that 'it is sometimes permissible to bring about by oblique intention what one may not directly intend') can be used to justify terrible atrocities.

At the US Military Academy at West Point, which trains officers for the US military, 'all the cadets are exposed to trolleyology as part of a compulsory course in philosophy and "Just War" theory', with tutors claiming that '[i]t helps underline the difference' between the US military and al-Qaeda.

Meanwhile, research into universal moral grammar 'could [ultimately help] reduce moral considerations to algorithms', facilitating the deployment of fully autonomous robotic warfare at some point in the future.

And, of course, our moral intuitions play a central role in many of the issues that concern us, both as human beings and activists.

Anyone who has read and enjoyed Edmond's earlier books, co-authored with Nigel Warburton (of which Wittgenstein's Poker is the best known) will need no further encouragement from me to read this book.

Rich in anecdote and example and wide-ranging in scope, Would You_Kill the Fat Man?, is by turns fascinating and unsettling. There are even some good jokes ('How many moral philosophers does it take to change a light bulb? Answer: Eight. One to change it and seven to hold everything else equal').

It certainly helped to shake this reader from his dogmatic moral slumbers.