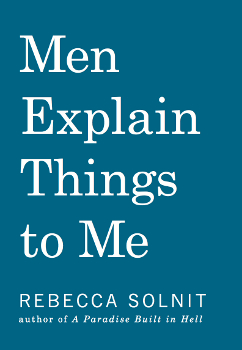 In 2008, Rebecca Solnit wrote a brief essay, 'Men Explain Things to Me', that went viral on the internet.

The title was inspired by an incident in which a male party host, on hearing that she had just published a book about the 19th century photographer Eadweard Muybridge, insisted on telling Solnit all about the very important  Muybridge book that had come out earlier that year – only to discover, of course that it was Solnit's book that he was talking about.

However, that essay – and this collection - goes well beyond the phenemenon of 'mansplaining', to explore the continuum of sexist behaviour stretching 'from minor social misery to violent silencing and violent death'.

'We have an abundance of rape and violence against women in [the US] and on this Earth,' she notes, 'though it's almost never treated as a civil rights of human rights issue, or a crisis, or even a pattern. Violence doesn't have a race, a class, a religion, or a nationality, but it does have a gender.'

Not that Solnit is anti-men. Indeed, she reminds us that, 'When the first women's rights convention was held in Seneca Falls, New York in 1848, thirty-two of the one hundred signatories to its Declaration of Independence-echoing manifesto were men', and that feminism - 'the radical notion that women are people' (Marie Shear) – is a 'campaign to liberate us all.'