Christopher Coker, Can War be Eliminated? 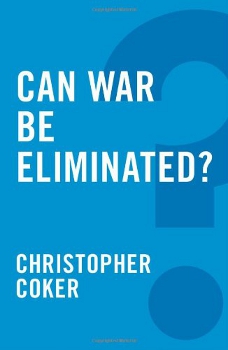 12 years ago Philip Bobbitt published ‘The Shield of Achilles’, positing a central political and creative social role for war. Now Polity Press are publishing some short works on ‘Global Futures’ and one of them is this little book by Christopher Coker of LSE. It is much shorter, and much more accessible, than Bobbitt, and the author sees war as less creative than Bobbitt suggests.

The major question addressed by both is whether war is ‘pathological’ (Rousseau) or ‘normal’ (Kant). In the former case pacifism is the only rational position, but in the latter we can still construct a balance sheet to evaluate war while rejecting the pathological label. Coker, like Bobbitt, believes that war is embedded in our culture and possibly socially evolved. He argues against any supposed peaceability of primitive societies, adopting a rather Hobbesian view of humanity.

The abolition of war may therefore demand more than UN decision-making; it may require either or both new thinking (Hegel, Freud) or moral improvement (Kant). War’s nature changes but change does not end it. Technology has more than once been thought to make war impossible – the Maxim gun in the 19th. century and nuclear weapons in the 20th. but such weapons are recruited into the armoury and the hope that war may become impossible remains unrealised.

Coker uses Bobbitt’s idea that the ‘nation-state’ is giving way to the ‘market-state’ with consequent partial privatisation of war and a declining need for patriotism. Some states are not yet market-states and contribute to a fragmented international order. He notes the continuing nuclear weapons use taboo. Is this linked to the continuing absence of great power war?

Kant predicted a ‘federation of free states’ (remarkably prescient of the UN) but thought that human nature also had to approach moral maturity. Yet not all states and cultures believe in the secular western democratic model of international relationships. ‘Peace’ has multiple meanings, as also pointed out by Susan Sontag. Is it: Absence of war? Forgetting? Forgiveness? Or Victory! Note the historic peace enforced by power (Pax Britannica). Can peace come without freedom? Can it only come without freedom?

Coker does not reach a final conclusion as to a more peaceful future. War may be ‘normal’ but we are also not murderous. He is aware of numerous recent ‘peace’ books and commends J. Horgan’s ‘The end of war’ (2012). He provides an extensive and important terminal bibliography. While far from pacifism this book is a useful summary of what to consider in the struggle to abolish war. It can be read in an evening. Almost every page contains both a thought to agree with and then one to oppose. (For example, Coker claims, like Heraclitus, that war is embedded in human culture. We may reluctantly have to agree. But he goes on to give it an evolutionary basis, citing group selection theory. This is surely doubtful and probably wrong.)

It’s realistic. The reader must supply the optimism. The challenge is worth while.