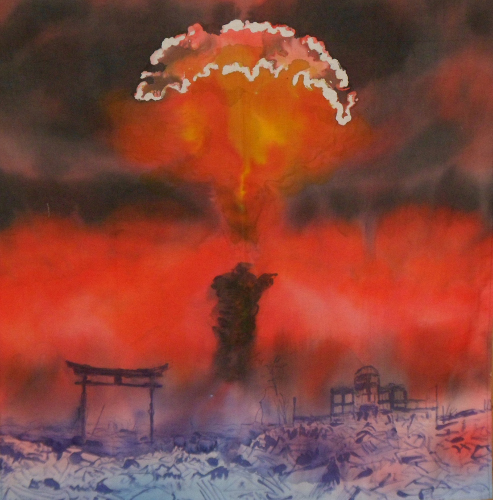 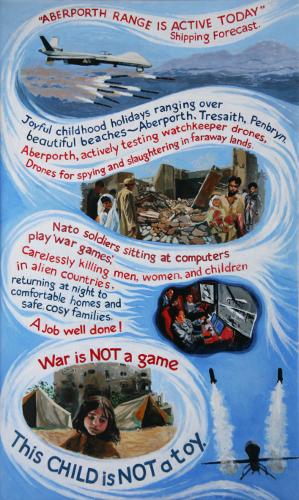 For the last few years we have been holidaying at Little Wedlock, owned by Quakers Anne and Malcolm Gregson. Anne is a fine artist who runs a gallery with her daughter. In August, we were treated to her latest collection ‘The Dance of Life and the Dance of Death’, created especially for an exhibition about peace.

‘The Dance of Life’ is a set of four paintings on silk hangings. ‘Forest Green’ has been sold, but the remaining hangings are still part of the exhibition. ‘Life Giving Water’ is coloured blue and green as tiny circular organisms come to life in the water. ‘Renewing Fire’ is a swirl of red orange, yellow flames that give rise to a phoenix. ‘Sky Dance’ is paler blue, and brown, as doves circle in flight above a group of butterflies, culminating in a peace dove, carrying a twig in its beak. They’re vibrant, moving pieces, that hung amidst the ‘Dance of Death’ paintings during the exhibition, a reminder perhaps, that even in the death created by war, life and hope are possible.

‘The Dance of Death’ pictures can be divided into two sections: three large paintings depicting the world wars and drone wars, and pictures relating to Hiroshima, Nagasaki and Trident.

Anne described the process of creating the war paintings as ‘compelling’; once she started she felt driven to complete them. Taking inspiration from the works of Paul Nash and contemporary paintings, she weaves poetry and reflections through different images of war.

‘The War to End All Wars’ is very much influenced by Nash’s bleak landscapes. In one direction, a group of silhouetted soldiers trudge heads down past brown fields, pools of water and barren trees towards the setting sun. In the other, a group carry a stretcher against a darkening sky, the smoke of explosions behind them.

In the foreground, a soldier lies, apparently sleeping, until you realise from the pallor of his face, and his crooked neck, that he is dead.

It is appropriate that this is placed besides lines from Wilfred Owen’s ‘Anthem for a Doomed Youth’ (though the image also reminded me of Owen’s equally marvellous ‘Futility’) and Harry Patch’s famous statement ‘War is nothing but legalised murder’. A soldier stands at the front holding a child with a ball. ‘It was important to put some humanity in, amidst the horror,’ Anne says.

‘The War of My Childhood, 1939-1945’ depicts a series of images divided by barbed wire. At the top of the painting, an RAF plane rises above the fires of Dresden, while next to it, waves of German planes are piled on top of each other, in a copy of Nash’s ‘Totes Meer – Dead Sea of Planes’. Beneath these weapons of war, lie their effects. On the left we see the bombed out churches of Coventry. On the right images of Dresden. Children pull their belongings on a cart, through rubble; an old woman sits in ruins; a silhouetted group sifts their way through what look at first sight like piles of rubbish but are, in fact, heaps of dead bodies.

The picture is completed by a group of flowers in the centre and above it, a white poppy and the words Frieden (‘Peace’ in German) and some lines from Henry Reed’s poem ‘Naming of Parts’, which Anne has always loved. The image that troubled her most when painting was the picture of the dead bodies, which filled her with horror as she put it on the canvas, and yet, she felt was essential to telling the truth about war.

The final picture in the series focuses on drone warfare and is drawn from Anne’s own reflections and photographs she has found on the internet. There are four images in this painting, united by a vapour trail on which Anne has written some commentary about drones. The top picture shows a drone launching its lethal weapons. Beneath it we see the impact of those weapons: destroyed buildings, a man carrying a wounded child, mournful spectators.

Underneath this, Barack Obama jokes with a couple of drone pilots as their computer screen indicates a target has been chosen. Of course, they would say the target is a terrorist, but the other images in this painting say otherwise. Finally, at the bottom a child stands in the rubble, surrounded by the words ‘War is not a Game, this Child is not a Toy’

Anne painted these three paintings in parallel, and so it is not surprising they feel connected, particularly through with the repetition of the colours blue, red, amber and brown. They also connect thematically. Repeated images of rubble, the casual cruelty of death, the people who survive in the midst of harm, powerfully demonstrating that ‘war is not good for human beings or children’.

The final section of pictures relate to the most destructive form of weaponry – the atomic bomb. ‘The Destruction of Hiroshima and Nagaski 1945’ depicts a red and orange mushroom cloud, exploding against a black sky. It’s a beautiful image at first, until you look beneath at the destruction it has created, a grey dead landscape, littered boulders, only the odd arch or structure remaining. Besides it, Anne has placed a painting of a young girl who survived Nagasaki.

The pictures are accompanied by three stanzas of Kosi Kiroshika’s poem ‘Song for Hiroshima’, painted over images of poisoned grass, sea and a rainbow, ‘so the third atom bomb never comes’.

The remaining painting was painted in response to the launch of Britain’s Trident nuclear missile submarine in Easter 1991. The black submarine emerges from burning dockyards, a crucifix in the background. In the foreground, flowers for peace float on the water.

I found this collection of paintings extremely moving, and was as compelled to write about them, as Anne was to paint them. I highly recommend going to see them if you can.