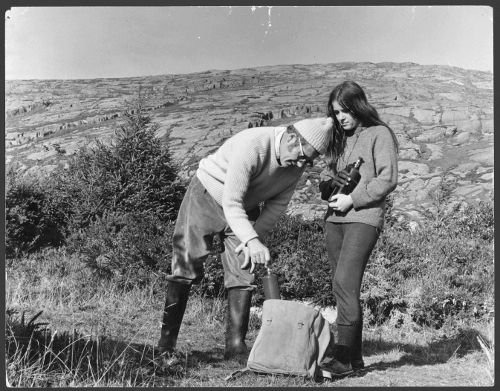 To say that James Lovelock is a divisive figure in the environmental movement would be a considerable understatement.

Describing himself as an 'old-fashioned green', he is fêted by some for his groundbreaking speculations about the relationship between living organisims and the Earth. But he is also reviled by others for his vociferous advocacy of fracking and nuclear power, and his rubbishing of renewable energy (according to one press report he keeps a picture of a wind turbine on his study wall to remind him 'how ugly and useless they are').

Lovelock is best known for two things: his invention of the Electron Capture Detector (ECD) - a device capable of detecting the equivalent of a drop of ink diluted in 20 Olympic-sized swimming pools, which played a key role in establishing that man-made chemicals were damaging the ozone layer; and his Gaia theory which says, roughly, that life and the Earth have co-evolved over billions of years to produce and maintain conditions that are conducive to living organisms. After spending decades working from home and / or as a consultant with no formal academic position, he is also probably the most prominent example of that rarest of breeds, the 'independent' scientist.

These three facets of his life and work are all on prominent display at the Science Museum's exhibition 'Unlocking Lovelock: Scientist, Inventor, Maverick'.

During his long career, Lovelock has worked on a wide variety of subjects, ranging from gas chromatography to re-animating frozen hamsters, and the items on display include the watchmaker's lathe he used to manufacturer many of his inventions (an instrument 'so precise it can carve a slice from a human hair'), and the home-made apparatus he built to use during a 1971 trip to the Antarctic to try and detect tiny traces of chlorofluorocarbons (CFCs) in the atmosphere.

There are also school reports & juvenilia, a printout from an early computer simulation of Daisy World - the simple model that Lovelock and his collaborator Andrew Watson created in an attempt to convince the scientific community that something along the lines of the Gaia hypothesis could operate on a non-magical basis – and an invitation from Margaret Thatcher (a Lovelock fan) for dinner at No. 10. (Lovelock himself says that he is 'neither strongly left nor right', though he adds - reasonably enough - that he 'detest[s] the Liberal Democrats'.)

Accompanying films feature Lovelock reflecting on his life and career, and an all-too-brief (though not wholly uncritical) examination of the scientific and cultural status of his Gaia hypothesis.

A relatively compact affair (a plus in my book), it's interesting to see these - often functional or unprepossessing looking - objects presented for one's intellectual (and maybe even aesthetic) reflection. And, whilst you won't come away knowing that much more about Gaia (or anything else) at the end, the usual justification for such things – that it will act as a spur to find out more after you leave – is surely well-founded in this case.

At first glance, Lovelock's biography reveals a streak of moral, as well as intellectual, independence. Holding strong pacifist views at the outset of WW2, he registered as a conscientious objector - a status he later relinquished in 1944. Asked to burn live rabbits as part of his research – and deeming such use unnecessary - he and his colleague decided to burn themselves instead, an experience he described as 'exquisitely painful'.

It might, therefore, seem anomalous that the exhibition's two 'principal sponsors' are Shell and Siemens.

Shell's record is, perhaps, too well known to require comment. However, as the Lovelock exhibition is part of the Museum's Climate Changing Programme - and therefore arguably part of the company's corporate greenwash - it may be worth recalling that Shell's US subsidiary spent many year's helping to fund the Global Climate Coalition, a lobby group dedicated to sowing doubt about the growing scientific consensus on global warming. Siemens, meanwhile, has helped Iran's theocracy build 'one of the world's most sophisticated mechanisms for controlling and censoring the Internet' (Wall Street Journal) and is involved in military IT contracts.

However, digging deeper, perhaps their sponsorship is not so surprising after all. After all, Lovelock has worked as a consultant for the Ministry of Defence, and – according to his authorised biography - his relationship with Shell, for whom he has also worked as a consultant, 'was the bedrock of his life as an independent scientist'. Indeed, his famous 1966 article 'Some thoughts on the the year 2000' was written at the oil giant's request. Then he predicted that 'avoidance of ecological disaster' might be Shell's 'major activity' by the year 2000. Instead Shell is today making a fortune exploiting Canada's tar sands.

Doubtless many self-styled 'independent' scientists and inventors are simply cranks. Lovelock is clearly in a different category but, as George Monbiot has recently noted, 'he doesn't half talk some rubbish sometimes'*.

For example, in his latest book Lovelock apparently claims that 'urban green lobbies' in the US forced a ban on DDT leading 'to a rise in malaria deaths to 2 million yearly, plus over 100 million disabled by the disease'. As Monbiot points out, this pernicious meme - which Lovelock is now helping to spread - 'was deliberately concocted [by corporate interests] to divide and discredit environmental campaigns', and we even have the tobacco industry documents to prove it. In fact, not only was there no such ban on DDT's anti-malarial use - the ban was for agricultural use only – but the ban on the chemical's use in agricullture was was partly motivated by a recognition that such use was aiding the evolution of DDT-resistant mosquitoes.

In a similar vein, Lovelock has recently backtracked from his earlier, alarmist position on global warming, reportedly on the grounds that '[t]he world has not warmed up very much since the millennium' and therefore that we now 'don't know what the climate is doing'.

The combination of bully pulpit with what appears to be ignorance of Nigel Lawsoneque proportions, is disturbing to say the least.

As the Met Office's Climate Programmes Co-ordinator, Verity Payne notes, 'most of the heat trapped in the climate system goes into the oceans ... [which] have been warming pretty steadily during the last 55 years', while fluctuations in global surface temperature records (the sort of records that Lovelock is referring to) mean that 'you simply can't confidently work out the long-term effect of greenhouse gas emissions on global [surface] temperature for periods of less than a few decades' (see graphic). 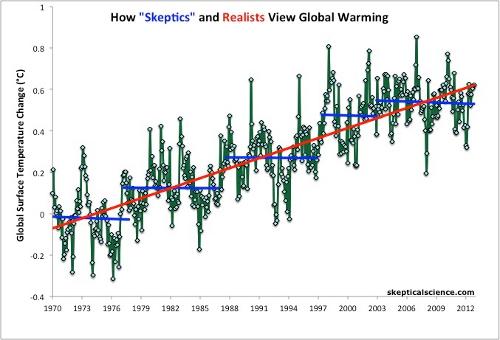 Is it really true, as Lovelock claims, that we 'don't know what the climate is doing'?

But what of Gaia, Lovelock's chief claim to intellectual fame?

First formulated in the 1960s, the Gaia hypothesis has had a huge cultural impact. And, while the scientific community was initially extremely hostile – that doyen of evolutionary biology, John Maynard Smith, once called it 'an evil religion' – the theory has also gained some respectability, with a 2001 declaration by the World Climate Research Programme and others claiming that research had shown that '[t]he Earth System behaves as a single, self-regulating system comprised of physical, chemical, biological and human components.'

Nonetheless, a recent major review of the evidence for and against the theory (On Gaia: A Critical Investigation of the Relationship between Life and Earth, Princeton University Press, 2013), concludes that, while a 'beautiful idea', it 'is not consistent with modern scientific evidence and understanding and should therefore be rejected.' There is no 'smoking gun' (ie. no fact that's only explained by Gaia), no proven mechanism whereby it could have arisen, and some of the key arguments for it are mistaken. Moreover, there is now abundant evidence of past environmental instability contra Gaia.

Does any of this matter? Yes, argues On Gaia's author Toby Tyrell, professor of Earth system science at the National Oceanography Centre, not least because the Gaia hypothesis – which 'emphasizes stabilising feedbacks and protective mechanisms that keep the environment in check' -  'can lead to excessive complacency about the robustness and resilience of the natural system.'

Lovelock's own response to ozone depletion appears to one example of this (see below). A second is afforded by John Gray who, in a recent profile of Lovelock, writes with apparent approval that, 'The way forward is to use human inventiveness to adapt to a shift in the environment that can no longer be prevented, and leave recovery to the resilience of Gaia.'

'We need to rid ourselves of the notion that the natural world is normally a stable, automatically self-regulated system,' Tyrell argues. For, if Gaia is false, then '[m]aintaining the Earth’s environment is up to us.'

* It is perhaps worth noting that Lynn Margulis – another 'maverick', best known for her successful championing of the theory that the mitochondria and chloroplasts in contemporary animal and plant cells originated as the result of symbioses between single-celled organisms – ended up championing the notion that 'there's no evidence that HIV is an infectious virus, or even an entity at all'. An early collaborator with Lovelock on Gaia, her role is prominently featured in the exhibition. Perhaps crankdom is an occupational hazard for the independently-minded?

Lovelock and the Ozone Layer

In 1974 scientists Mario Molina and Frank Sherwood published their famous calculations concerning the impact of chloroflurocarbons (CFCs) on the ozone later.

Spurred by the silence their results received and frightened by their own catastrophic predictions ('The work is going well,' Rowland is reported to have told his wife, 'but it looks like the end of the world'), the pair held a press conference calling for a global ban on CFCs, then an $8bn industry.

Unsurprisingly, the latter strongly resisted attempts at regulation and funded efforts to try and discredit the science linking CFCs to ozone depletion (a pattern later repeated by Big Oil over global warming).

At Congressional hearings in December 1974 the CFC industries, led by Du Pont, called Lovelock as one of their star witnesses. 'Dismissive of early concerns about ozone depletion', he maintained this position until just few months before the discovery of the ozone hole over Antarctica in 1985 (Tyrell, p. 216, 269).

In part, his complacency appears to have been motivated by his belief in Gaia's restorative powers, though his personal interactions with the CFC industry also seemed to have played a role. 'I liked the people, they seemed to be a very honourable, decent bunch of scientists', he later explained - suggesting that his corporate consultancies (see above) may have compromised his 'independence' more than more than he imagines.

According to the UN Environment Programme, global models suggest that the 1987 Montreal Protocol that phased-out the production of CFCs and other ozone-depleting chemicals 'will have prevented 2 million cases of skin cancer annually by 2030.'

'Unlocking Lovelock: Scientist, Inventor, Maverick' is on at the Science Museum (Exhibition Rd, London SW7 2DD) until 9 April 2015. Entry is free. The Museum is open 10am - 6pm every day except 24 - 26 December.