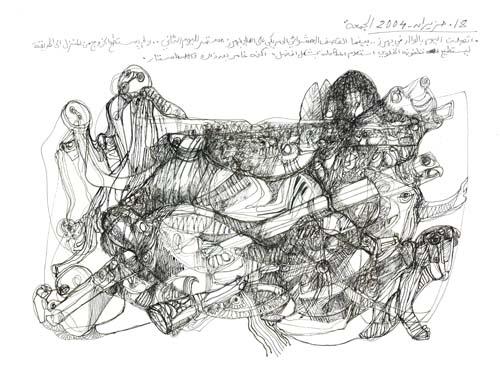 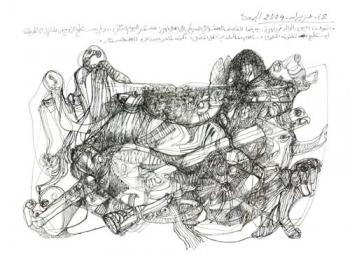 Satta Hashem grew up in Buhrez, Diyala province, and left Iraq in 1978 aged 18, having been involved in opposition to Saddam Hussein’s regime. He trained in Algeria and the Soviet Union, later moving to Sweden and then the UK. He has kept a daily diary of drawings throughout the wars of 1990-1 and 2003-. A departure from his practice in painting, in which Hashem draws on scientific theories of light and colour, these drawings feed the experience of war through Mesopotamian myths of violence and peace, good and evil, while connecting him with events in Iraq. The text reads, ‘I phoned my father today in Buhrez while the American bombing of the people of Buhrez was going on for the second day. It was impossible for him to go out into the garden to get better reception on his mobile phone, and yet he took the risk and ventured out... God keep him safe.” From catalogue notes for the exhibition at University College London Geographies of War: Iraq Revisited. www.sattahashem.com