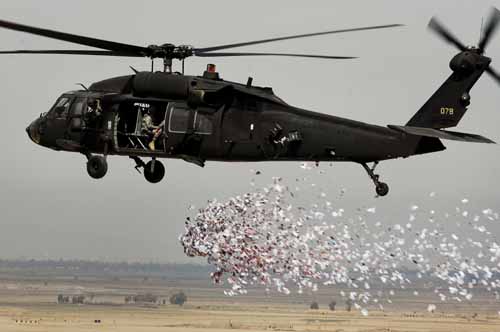 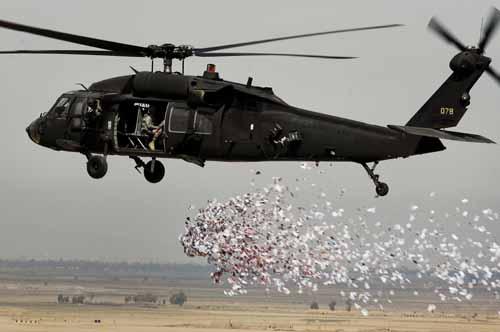 The most serious threat of nuclear terrorism comes not from some fragmented, vengeful jihadist network, but from the western states who form the nuclear core of the NATO alliance, who have issued repeated threats against non-nuclear weapon states in the Global South.

It is in fact official policy that Britain will use or threaten to use its nuclear weapons to preserve its economic and financial advantages throughout the world. You just have to join the dots.

This is one of the purposes of Trident, or at least ‘Tactical Trident’.

In November 1993, Britain’s then defence secretary, Malcolm Rifkind, said that it was important for the ‘credibility’ of the nuclear deterrent that Britain possessed ‘the capability to undertake a more limited nuclear strike in order to induce a political decision to halt aggression by delivering an unmistakable message of our willingness to defend our vital interests to the utmost’.

The ministry of defence (MoD) stated last December that ‘the UK’s nuclear weapons are not designed for military use during conflict but instead to deter and prevent nuclear blackmail and acts of aggression against our vital interests that cannot be countered by other means.’

The key phrase here, as in the Rifkind doctrine, is ‘vital interests’.

The MoD said last December: ‘we do not define what we consider to be our vital interests’ — in order to maintain nuclear ‘ambiguity’. However, it is clear from the 2010 NSS that trade and overseas investments are at the heart of ‘our vital interests’: ‘our entire government effort overseas must be geared to promote our trade, the lifeblood of our economy ... our international role extends beyond the commercial balance sheet, vital though it is’. There’s also a reference in the national security strategy to ‘our vital networks, including for example our energy supplies’.

Britain not only has a policy of threatening to use its nuclear weapons against non-nuclear countries, it has a long record of actual nuclear terrorism. (Much the same can be said of the US, as ably documented by Joseph Gerson in his Empire and the Bomb, Pluto 2007.)

Terrorism, simply put, is the use or threatened use of violence for political purposes.

Nuclear terrorism, therefore, is the use or threatened use of nuclear weapons for political purposes.

The concept of ‘terrorism’ arose in the context of the French revolution, relating to state terror, and there is no justification in logic or history for excluding government action from the definition.

In the run-up to the invasion of Iraq in 2003, British defence secretary Geoff Hoon engaged in nuclear terrorism.

On 20 March 2002, Hoon told the house of commons select committee on defence that states like Iraq ‘can be absolutely confident that in the right conditions we would be willing to use our nuclear weapons.’ Four days later, Hoon appeared on ITV’s Jonathan Dimbleby show and insisted that the government ‘reserved the right’ to use nuclear weapons if Britain or British troops were threatened by chemical or biological weapons.

When asked about these nuclear threats in a house of commons debate on 29 April 2002, Hoon said: ‘ultimately, and in conditions of extreme self-defence, nuclear weapons would have to be used.’ He refused to clarify what the ‘certain specified conditions’ were in which ‘we would be prepared to use them’.

The political purpose of his threats was to deter Iraq from using chemical weapons against British forces.

Over a decade earlier, in the run-up to the 1991 US-UK assault on Iraq, British officials made nuclear threats for similar reasons. A senior officer with the British 7th Armoured Brigade was quoted as saying, on 30 September 1990, that, if attacked with chemical weapons, British forces would retaliate ‘with battlefield nuclear weapons’. On 26 October 1990, a senior British minister was quoted: ‘If we were prepared to use tactical nuclear weapons against the Russians, I can’t see why we shouldn’t be prepared to use them against Iraq.’ On 13 November, Guardian journalist Hugo Young reported hearing a minister saying the war might have to be ended with ‘tactical nukes’.

On 17 January 1991, the prime minister John Major said that Britain ‘did not envisage the use of nuclear weapons’ against Iraq, which hardly ruled it out.
If we go back even earlier, we can find nuclear sabre-rattling against Iraq in 1961 in the context of the granting of independence to Kuwait.

These threats against Iraq, a non-nuclear weapon state, are not aberrations, they fit into a larger pattern of  nuclear intimidation.

In 1956, the British chiefs of staff resolved that ‘the use of nuclear air power must form the basis of our strategy’ in East Asia, though no Communist invasions were anticipated.

In 1957, the defence white paper promised that ‘bomber squadrons based in Cyprus capable of delivering nuclear weapons’ would be assigned to Middle East duties, even though the chiefs of staff had secretly concluded that a major nuclear war there was unlikely.

Nuclear weapons were being used to shore up imperial control rather than to deter Russia and China from invasion.

Strategic nuclear V-bombers were deployed throughout the empire, for example flying in 1955 to Australia via Iraq, Pakistan, Sri Lanka (then Ceylon) and Singapore.

V-bombers were sent to attend the independence ceremonies in Uganda and Jamaica, signalling Britain’s continuing (and overwhelming) power in these regions.

V-bombers were sent out to Singapore, and stayed beyond their normal deployment, during the British intervention against Indonesia known as the ‘Malaysian confrontation’ (1963-66).

Until western peace movements start to see nuclear history from the perspective of the Global South, they will continue to misunderstand the role of nuclear arsenals, fixated on hardware and numbers rather than doctrines and use (and threatened use).

They are often unknowlingly colluding with official propaganda, which helps to secure the acquiescence of the general public in the retention of nuclear weapons.

Most people in Britain and the US think nuclear weapons are there as weapons of last resort, kept just in case some mad state threatens the homeland. They would be horrified if they knew the truth about western nuclear terrorism, and nothing would do more to undermine public support for retaining these nuclear arsenals.