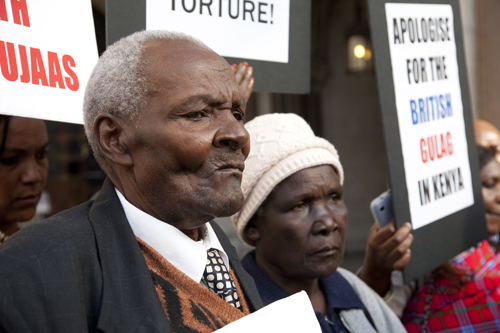 Behind the scenes of a historic victory for Kenyan torture victims 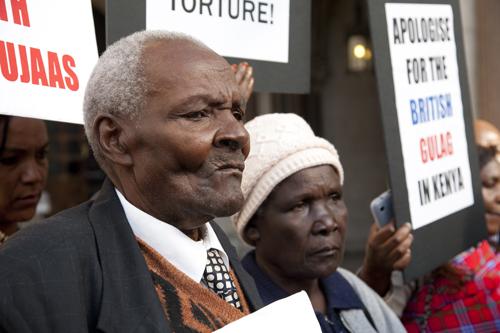 More than 60 years after Britain declared the Kenyan ‘Emergency’, the British government has been forced to provide compensation to over 5,000 Kenyans for atrocities committed during its counter-insurgency campaign.

During the Emergency, an anti-colonial coalition, Mau Mau, responded to British imperialist control in Kenya. As a result, thousands of Kenyans in Kikuyu, Embu and Meru areas were detained, abused and executed. The torture included beatings, castration and rape.

In 1959, at the Hola detention camp in the Coast province of Kenya, 88 Mau Mau detainees were beaten and whipped, leaving 11 dead and the other 77 permanently injured. The 11 were beaten to death after refusing to physically dig their own graves. A survivor, Wambugu Wa Nyingi later said: ‘I want the world to know about the years I have lost and what was taken from a generation of Kenyans.’

According to the Kenyan Human Rights Commission (KHRC), 90,000 Kenyans were abused or murdered because they were suspected of alignment with the Mau Mau.

In 2002, lawyer Martyn Day, of the English firm Leigh Day, was approached by a former district officer of the colonial government, and members of the Mau Mau.

‘There was no dispute that there had been widespread and systematic torture of detainees during the Kenyan emergency. In fact, Peace News was instrumental in highlighting the abuses at the time,’ said Dan Leader, senior partner at Leigh Day.

‘So it was just a question of whether the British government would own up to it and provide these victims of torture with redress.’

Prior to 2003, it was illegal for the Mau Mau to organise in Kenya, thereby cutting the chances of pursuing compensations for victims.

Leigh Day sought supporting evidence for the compensation case from historians Caroline Elkins and David Anderson, authors of Imperial Reckoning: The Untold Story of Britain’s Gulag in Kenya, and Histories of the Hanged: Britain’s Dirty War in Kenya and the End of Empire, respectively.

In 2005, Elkins and Anderson published studies, which provided Leigh Day with evidence of ‘systemic, widespread torture’ in Kenya. The following year, the British government was served with a ‘letter of claim’, but refused liability for the incidents.

A solid case was formed in 2009 when Day and Leader conducted interviews with Mau Mau, settling on five claimants to present a ‘test case’ before the courts. Of the three victims who were there to see eventual victory, Paulo Muoka Nzili had been castrated, Wambuga Wa Nyingi had been severely beaten and Jane Muthoni Mara suffered appalling sexual abuse in detention. (Ndiku Mutwiwa passed away during the process, and another claimant withdrew his case for personal reasons.)

Initially, the case was dismissed from the British courts and the British government attempted to place full responsibility on the Kenyan government. This was met with protests from, among others, South African archbishop Desmond Tutu, Liberal Democrat MP Vince Cable, and Labour lord Frank Judd. The Kenyan government gave its full backing to the compensation case.

A crucial moment came in 2011 when the historians and lawyers uncovered an allusion to hidden archives from the Emergency. The secret archive contained over 8,000 documents, including detailed communications between British officials and the colonial administration.

‘We first noticed in the Kenya archives that there were files missing, some things had been removed. We began looking for evidence and began to find occasional notes or bits of correspondence,’ commented Anderson. ‘It was like having a jigsaw puzzle but not all of the pieces.’

In Anderson’s opinion, the judge considered the documents to be crucial evidence, demonstrating that the injuries suffered were the consequence of government policy. In October 2012, the high court ruled that a full trial should go ahead.

On 6 June 2013, the British government finally abandoned attempts to appeal against this judgement, and agreed to pay £19.9m to settle the claims of more than 5,000 Kenyan victims.

For Leader, this case served as a moment of triumph for his clients: ‘I sat down with the victims in Nairobi on the day of the settlement and could see that the moment for them was hugely significant.’

The success of the Mau Mau case has gained wide attention, not only because the claimants won after years of struggle, but also because it symbolises a rare victory for the victims of colonialism. The actions of colonial powers over many centuries have left lineages of scars, histories of oppression, and memories of brutality in much of the Global South.

Jordana Jarrett is a US student working with Peace News in London.

The case is documented on Leigh Day’s website: www.leighday.co.uk