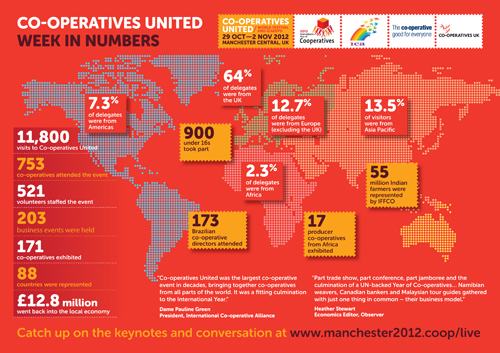 Felix Lozano is inspired by the spirit of a co-operation at Co-operatives United. 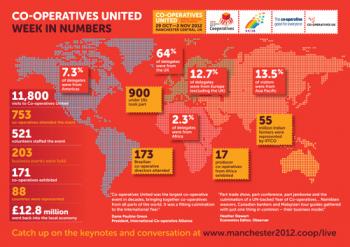 This event was organised to round off the ‘United Nations 2012 International Year of the Co-operative’ and to launch a blueprint for the next decade. It was headed by the International Co-operative Alliance (ICA): the only international movement to continue to work through both European World Wars. Even the labour and union movements took sides and broke communications, but not the ICA. Delegates continued to sit together, in alphabetical order, as is usual, to shake hands and co-operate.

Co-operation is a nonpolitical method, which automatically takes the profits out of war, and consequently makes war so much less profitable and therefore much less likely. Co-operation is a practical way toward a stabilised and friendlier society. It demonstrates its capacity for success. Co-operation refutes the idea of using evil means to attain good ends. Virtuous ends are best gained by virtuous means. Democracy is best achieved by practicing democracy. Co-operation is best reached by co-operative methods. Peace is best secured by peaceful ways.

Co-operation is pre-figurative organising (creating and sustaining a living revolutionary practice) and has always been present in co-operative organisation and purpose. How are we to live in our more desired society if we don't practice it now? Dealing with fundamental community needs and making money has been difficult, but has worked. The evidence is there. But first a short reminder of the numbers involved: if a million seconds is 12 days. Then, 1 billion seconds is nearly 32 years and, 1 trillion seconds is 31,688 years! This year, the top 300 co-operatives had a turnover of nearly $2 trillion.

Having been in a workers co-operative for 25 years I am still discovering how big and important the movement is to me on so many levels. I am profoundly grateful to have stumbled into this way of working/being/growing that is so naturally mutual and human. It has never been an easy journey, but it has been a journey, where I’ve been able to make real decisions, have ‘real’ discussion, arguments, insights, and compassion with my work colleagues.

The caring values, of the co-operative movement, practiced by much of humanity, have been the same for a million years and are the only values that have a future.