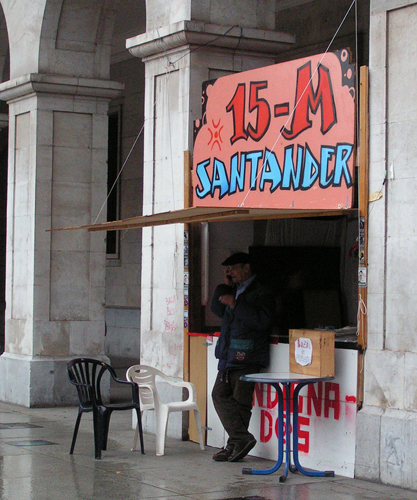 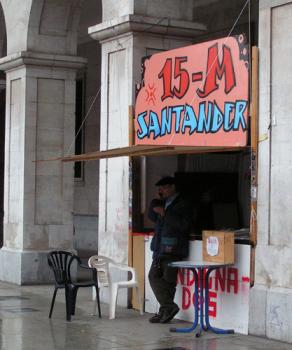 The suicide on 9 November of Amaya Egaña, a woman facing eviction in Barakaldo in the Spanish Basque country, has sparked public outrage about Spanish mortgage laws. Polls the next weekend recorded 95% demanding a change in Spain’s mortgage laws. (Most Spanish families — 83%— own their own homes.) On the following Monday, the association of banks declared a two-year moratorium on evictions ‘in extreme cases’, pre-empting what they feared might come out of urgent negotiations between the governing Partido Popular (PP) and the opposition Socialist Party (PSOE – which governed from 2003 to 2011).

This was actually the third suicide attempt provoked by eviction within a month (one failed) in a country where more than 400,000 homes have been repossessed since 2007, and some 350,000 evictions have been set in process. Most mortgage defaulters (70%) have been laid off work, and a high proportion (35%) are immigrants. Take one typical story. Mohamed Aziz, a Moroccan immigrant who took out a new 33-year mortgage in 2007, when his job was made permanent. The mortgage was for €138,000 for a home then (at the height of the property bubble) valued at €190,000. This required a monthly payment of €700, more than half his monthly salary.

Aziz managed to make 10 payments, but delays in payment triggered an automatic hike in the interest rate from 4.75% to 18.75%. Then he was laid off work. His home was repossessed, and sold at auction for just €90,000, leaving him unemployed and with a debt of €40,000, plus thousands more claimed by the bank for ‘interest and costs’. He and his family now live in municipal ‘protected accommodation’.

What is not typical about Aziz is that he turned his treatment into a test case, ultimately reaching the European Court of Justice.

The popular slogan ‘it’s not a crisis, it’s a racket’ finds an echo in the words of the UN rapporteur on adequate housing who has referred to the ‘predatory lending’ policies of Spanish banks, including those ‘rescued’ by public or European funds.

This has been a central focus for the 15M movement (the Spanish forerunner of Occupy that began with the encampments in city squares in May 2011). The 15M’s neighbourhood assemblies have given crucial support to the Platform of Those Affected by Mortgages (PAH), which was established in 2009. Together, even before the recent suicides, they had successfully resisted around 500 evictions.

To protect citizens from the kind of swindle perpetrated on Aziz, the PAH has a moderate proposal, and has already collected more than the 500,000 signatures needed for it to be debated in parliament.

PAH proposes that, with some exceptions, banks should accept return of the property as payment in full of the debt and then renegotiate an affordable rent with the occupants. The Platform’s assiduous research and documentation has been backed up by the obstruction of evictions.

People excluded from policy-making use protest and non-cooperation to make the existing policy untenable.

Stopping evictions has been quite a simple form of direct action. The threatened household contacts their local anti-eviction group who mobilise mainly through telephone trees and email lists. Often just 20 protesters will suffice, usually with a lawyer on hand to help negotiate a suspension or postponement of the eviction. Some municipal authorities have instructed municipal police not to carry out evictions, others have withdrawn their accounts from banks which evict. Lately, even the largest police union has condemned the use of police in evictions.

Anti-eviction groups have gained overwhelming public support. 15M and others keep the pressure on the banks through a variety of actions. For over a month, threatened home-owners have been camping outside the head-office of the most notorious ‘rescued’ bank – Bankia, formerly Caja Madrid, which is responsible for most of the evictions in the Madrid area.

Other strong actions at bank branches – attempted occupations, threatened householders arriving to demand negotiation (with the support of local anti-eviction activists), or flash mobs singing new words to well-known songs (then uploading to YouTube) –highlight who is responsible for this distress.

The starting point for many of the new activists attracted to 15M has been the public’s exclusion from policy-making – the lack of choice between the dominant parties on an issue such as this.

In this case, these come together. On 8 November, the advocate general of the European Court of Justice (ECJ) reported her findings on the case brought by Mohamed Aziz (above) against the Catalan bank that evicted him. The advocate-general found five counts where the Spanish system fails to meet European norms – that is, either the mortgage contract contained abusive clauses, or the Spanish legal system failed to offer protection.

The ECJ is expected to endorse her findings early next year and to call on Spain to bring its mortgage laws into line with European Union norms.

The 15M movement is often criticised for its lack of strategy, and viewed as another movement doomed to failure because it has not defined achievable goals. I would argue it is having a deeper impact. The PAH (Platform of People Affected by Mortgages) is not the only campaign that has been given a much-needed boost of energy.

Thanks to a convergence of pressure, the two dominant parties have had to change their tune. Now, for thousands of households, the threat of eviction has been lifted – for a while. This should be celebrated as an example that people’s movements can change the will of obdurate parties, and as a sign of hope for other campaigns.

Of course, this is far from a final victory – perhaps half-time, with the government already preparing its counter-moves for the second half. The PP and PSOE could not agree a common policy. Therefore the governing PP has gone ahead in freezing evictions for two years – but only in extreme cases (which as they are defined would not have affected the recent suicides). The government has also finally agreed to use some of the huge numbers of unoccupied newly-built flats and houses.
Reverting to the football analogy – half-time can also be an opportunity to nobble the referee, the EU.

The movement of indignad@s is not naive about any of this. When Bankia offered to negotiate about the mortgages of people camped outside its head-office – if they would dismantle their camp – the camp stayed put and Bankia refused to negotiate. In times of austerity, the struggle is long and hard.

Howard Clark, a member of the Peace News board, lives in Madrid.