Enter the Dragons — in Cardiff 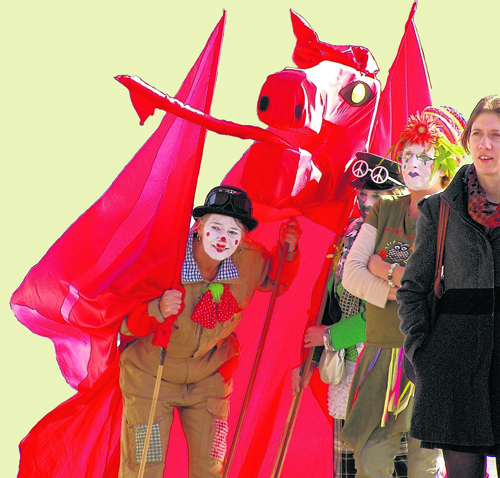 Welsh activists take anti-nuclear message to the steps of the Senedd.

‘The state is not a person, it is all of us,
And we all have to choose the way it goes.
Do we choose life?
Do we choose death?
Do we collude in murder?’
(From Trident: a British War Crime by Camilla Cancantata)

On 16 October, on the steps of the Senedd in Cardiff, people came and sang, other people came and spoke out, and a gaggle of Rebel Clowns and three great big red dragons staged the downfall of a nuclear submarine. The message was, as Jill Gough of CND Cymru put it: ‘Trident Submarines, Nuclear Weapons: Not in Wales, Not in England – Not Anywhere!’

The demonstration was a rejection of the suggestion, made by the Welsh Assembly’s first minister Carwyn Jones, that Trident would be ‘more than welcome’ in Wales if it were ejected from an independent Scotland, stating firmly that there is no political support for a ‘Faslane 2’ in Milford Haven.

Politicians from five parties spoke, and giant messages calling on the Welsh government not to support nuclear weapons based in Wales - or anywhere - were handed in to the first minister.

Messages were read out from the singer Dafydd Iwan, from the Archbishop of Wales, and from Bruce Kent, who wrote: ‘The people of Wales are just as intelligent and moral as the people of Scotland. A massive majority in both countries say an absolute “No” to Trident and all nuclear weapons… [which] are immoral, expensive, always dangerous and ensure insecurity not security… It’s time to get rid of them all; everywhere.’

The 200 participants came from the length and breadth of Wales, from Holyhead, Ceredigion and Pembrokeshire, plus a welcome delegation from Hereford Peace Council. The event was sponsored and organised by CND Cymru, Trident Ploughshares and Knighton Action for Peace and Justice, and brilliantly compèred by the poet Mererid Hopwood. Côr Gobaith, the Aberystwyth-based Choir of Hope, sang extracts from the oratorio Trident: a British War Crime by Camilla Cancantata (a powerful and moving piece). Côr Cochion, South Wales’ Red Choir, sang the Internationale in Welsh, and Côr Gobaith’s musical director Susie Ennals led everyone in a beautiful musical spiral dance to close.

Trident: a British War Crime was sung by a flash mob in 2004 in Edinburgh’s parliament hall:
www.camillacancantata.bandcamp.com