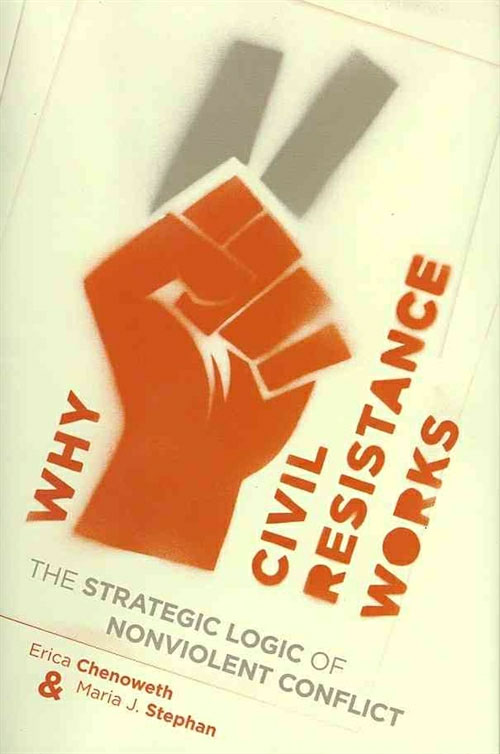 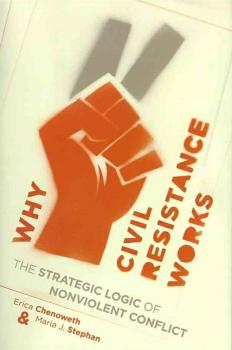 This study charts the success and failure of over 300 nonviolent and violent campaigns – aimed principally at regime change, self-determination/anti-occupation, or secession – between 1900 and 2006.

Overall during this period nonviolent campaigns proved twice as likely to achieve full or partial success as those that resorted to armed insurgency. This was the case regardless of the nature of the regime and its readiness to resort to repression. Moreover, whereas nonviolent campaigns have become increasingly successful in recent decades, reflecting perhaps a better understanding of technique and strategy, the success rate of armed resistance has declined.

The relative advantage of a nonviolent strategy, however, does vary according to the goals being sought. In anti-regime campaigns, nonviolent resistance had a decisive advantage. Where the objective had a territorial aspect, such as resisting occupation, the difference in the success rate was much narrower. But only in the case of secessionist campaigns was the advantage reversed, though the success rate of violent campaigns in such circumstances was also extremely low – only four such campaigns out of the 41 examined were adjudged successful.

Clearly a major difficulty in any such a study lies in categorising campaigns and outcomes. The authors acknowledge the difficulties and set out explicitly the criteria they are using. In regard to success or failure, they deliberately err on the side of caution, only judging a campaign successful if it achieves its objectives – or, in the case of partial success, some of its principal objectives – within a year of the peak of its activities, and provided it was clear that the outcome was a direct result of these activities.

What accounts for the relative success of nonviolent or civil resistance as against violent insurrection especially in face of repressive regimes? A major factor identified by the authors and other analysts is that civil resistance facilitates mass participation, which can cut across age, gender and social class divisions.

The result is more linkages and possibilities of rapport between the resistance and some within the ranks of those whom a regime depends on most directly for its power and influence – the police, army, administration and media.

Any attempted crackdown is then likely to result in disobedience and defections, and a backlash against the regime both internally and internationally. This analysis, however, comes with a caveat. If nonviolent campaigns fail to mobilise ‘a robust, diverse and broad-based membership’ they are unlikely to succeed. Being nonviolent is not in itself any guarantee of success.

Broader participation also opens up greater possibilities for tactical innovation and expands the repertoire of sanctions available, allowing the campaign to shift between methods of concentration (such as mass demonstrations) and dispersion (such as strikes and go-slows) and thus to have a strategic advantage over the opponent. And it is the strategic capacity of an opposition to deprive the regime of its sources of power, rather than structural factors such as the nature and ruthlessness of the regime, that the authors identify as crucial to success.

Official sanctions by individual states or the UN, and transnational grassroots campaigns can also contribute, as can a decision by a foreign power to stop giving support to an oppressive regime.

Armed insurrections tend to rely much more heavily for their success on help from outside in the form of arms, training and funding. This, the authors argue, may be because of the difficulty of involving large numbers in violent insurrection. However, they note that some armed uprisings have been accompanied by a mobilisation of the population and it is where this occurs that they have most often succeeded – for instance in the Russian, Chinese, Algerian, Cuban and Vietnamese revolutions. Even so the human costs of such revolutions can be appallingly high and nonviolent campaigns are much more likely than violent ones to result in more open and peaceful societies.

Some analysts have argued that the existence, or even the background threat, of an armed resistance produces what the they term a ‘radical flank’ effect, that is to say the authorities are prepared to make concessions to the civil resistance campaign to forestall the possibility of having to deal with a more radical armed opposition. If the threat is only a potential one, that may sometimes be the case.

But the authors point out that acts of violence by an armed insurgency may undermine the dynamic of a civil resistance campaign by causing those with a stake in the regime to close ranks and thus consolidate rather than undermine the regime’s pillars of support.

Does the evidence in this study provide a clinching argument on purely strategic grounds for a fully pacifist, or nonviolent politics? Not quite.

The strategic choices and tactical flexibility of a campaign may indeed, as the authors maintain, be more important than the structural conditions in the country where it occurs, but there are situations in which so many cards are stacked up against civil resistance that its chances of success are slight, however well prepared and sagaciously planned.

To date, moreover, civil resistance campaigns have delivered, or played a central role in delivering, an end to colonial or foreign rule, the toppling of dictatorships, the removal of blatant injustices within constitutional democracies (as in the case of the US civil rights movement) and the reclaiming of stolen elections. They have not, however, delivered societies prepared to renounce lethal violence in internal and external politics.

The former communist countries in Eastern Europe, for example, have not disarmed or chosen to rely on the same methods of nonviolent action for their defence as they used to end authoritarian rule, and have instead queued up to join the NATO military alliance.

Nonetheless, it is important to recognize the historic importance of the overthrow and discrediting of authoritarian communism. And it will require many such advances achieved through broad alliances, coupled with continued open debate about alternatives, if something closer to the ideal of a nonviolent society and peaceful international order is to be realised.

Among other works, Michael Randle co-edited (with April Carter and Howard Clark) People Power and Protest since 1945: a bibliography on nonviolent action published by (and available from) Housmans Bookshop, 2006.