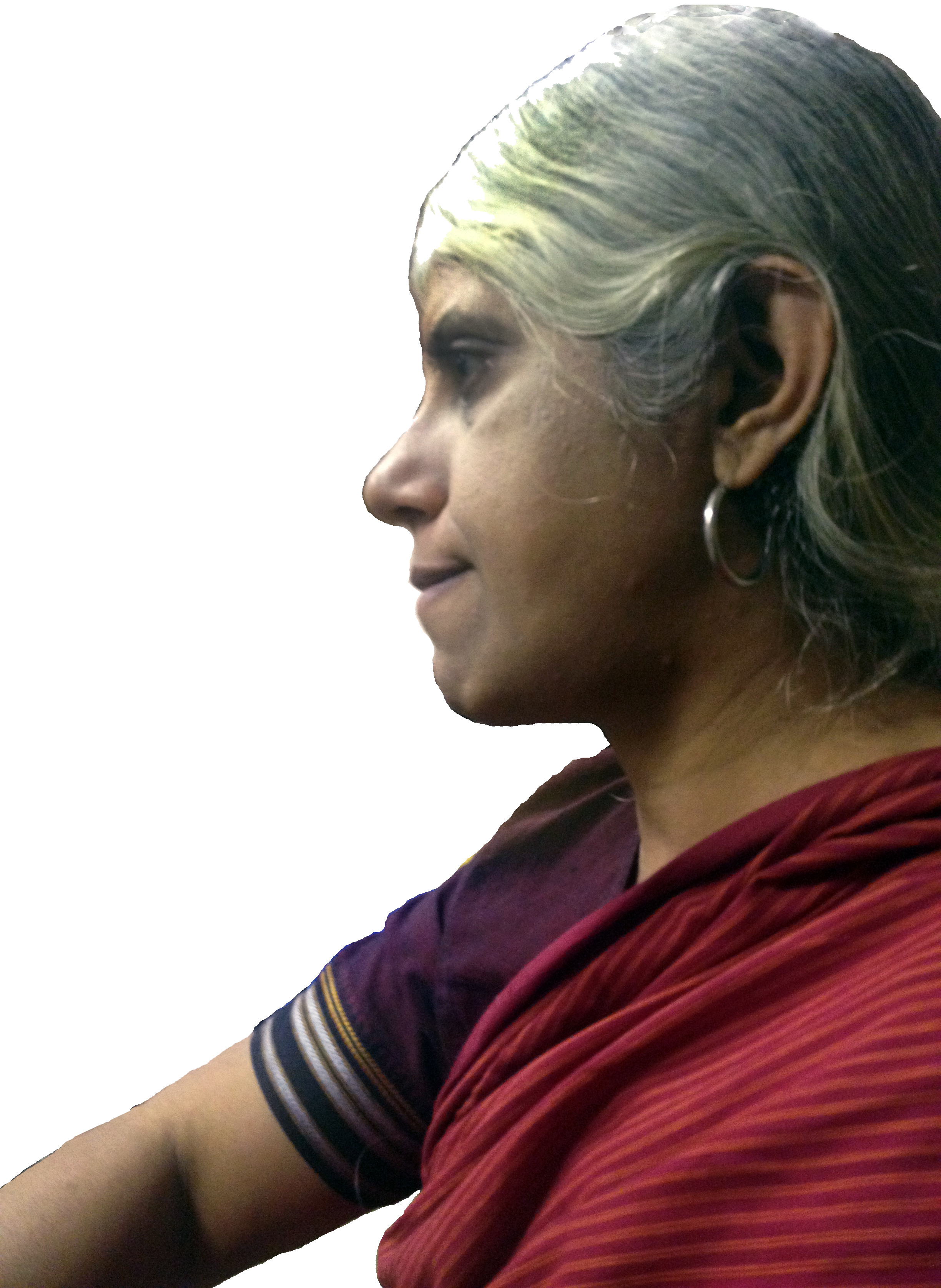 April’s Symposium on Nonviolent Movements & the Barrier of Fear brought dozens of activists and researchers from around the world to Coventry. 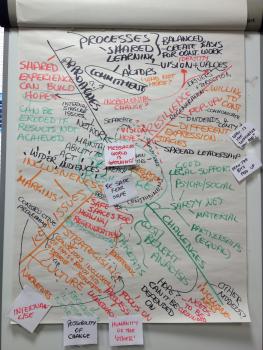 The first thing that really struck me about the ‘International Symposium on Nonviolent Movements and the Barrier of Fear’ was that it was really international. It brought together activists and academics from Zimbabwe, Uganda, Sweden, South Korea, Palestine, Kenya, Israel, India, Hercegovina, Germany, the UK and the US – and that was just in my first small-group discussion! Apart from the World Social Forum and the War Resisters’ International Triennial, it was the most international event I’ve ever experienced, and the richness of the stories that we heard was extraordinary.

Two speakers from Women of Zimbabwe Arise (WOZA) told some stories of their women-led grassroots democracy movement, now over 75,000-strong, and the way that women of all classes band together to demonstrate in the street, withstanding savage beatings and arrest. (As I write this, I look at the WOZA website and see that 500 members of the group split into three groups who held ‘die-ins’ in different parts of Bulawayo a few days ago, on 19 June.) I will never forget Jenni Williams at the symposium, describing how women would emerge from jail black-and-blue from their beatings, but shining with pride and electric with energy, having faced their fears and triumphed over them.

Jenni added that demo organisers would ensure that there was always a support team ready to ring the police stations to ask after the arrested, as a way of deterring torture. She said that there were now some police stations that would refuse to accept WOZA prisoners because ‘the phones will start ringing’!

At the other end of the spectrum, several people shared more personal stories. Janet Cherry, a white South African, spoke very movingly about her time as a covert ANC activist under apartheid: ‘I was most afraid of being tortured and betraying the people I loved.’ Once the ANC was ‘un-banned’, her fear of betraying others disappeared. She concluded: the absence of fear justifies the struggle.

The highlight of the whole symposium, for me, was an evening talk by Mohamed Moghazy of the Egyptian Committees to Defend the Revolution and fellow Egyptian activist Sherif Rizk of a group called New Republic.

The talk was fascinating about the dynamics of the Egyptian uprising, and I learned a lot, but the stand-out moment was when Mohamed was speaking in Arabic, being translated by Sherif. Mohamed said that when he got to Tahrir Square in Cairo on 25 January (the start of the mass uprising), bringing a crowd of people from his poor neighbourhood, ‘I was afraid because I saw highly-educated folk who live in high-class areas... like you.’

Sherif momentarily stopped translating, stunned to be labelled in this way. It was clear that Mohamed, who described himself as a worker, was not criticising Sherif; they’re friends. He was just expressing his truth, about the reality of class difference within a protest movement.

It is something that is very rarely expressed, but is a pervasive aspect of activism – and very much a ‘barrier of fear’, though class was not explicitly part of the symposium agenda. (To be fair, neither were race or gender.)

The symposium was structured less formally than a normal academic conference, without written papers to be addressed in each break-out group, and with people’s story-telling sprinkled through the agenda. Many people appreciated the informality, but the lack of any introductory paper inevitably led to time in each session being spent debating definitions and establishing elementary propositions.

One thing that came up was a clash of cultures over time. Scandinavian researcher and trainer Jørgen Johansen was a man after my own heart, starting his session on time without regard to the number of people in the hall. In a later session, Palestinian Saed Abu-Hijleh expressed the contrary view, with which I also sympathised, condemning the facilitators’ ‘colonial’ attitude toward time-keeping, saying that it was more important to pay attention to human life than to the start of coffee breaks.

Another clash of cultures came over structures of participation. It was clear the organisers had tried to inject as much participation into the structure as they could, but it was equally clear that there were activists in the process who were finding the formats on offer restrictive. Javier Garate, a Chilean activist based in the London office of War Resisters’ International (below Peace News), seized the opportunity one afternoon to get everyone in the hall to talk in pairs before coming back to a whole-group discussion.

It’s always difficult to know what the value of a gathering is, and this was a particularly difficult event to gauge, as it was a hybrid activist-academic conference, but I learnt a lot, definitely. I saw connections being made between people and initiatives.

Howard Clark, one of the organisers and a PN board member, explained to me that the immediate forerunner to the symposium was a 2006 seminar on ‘Unarmed Resistance: the Transnational Factor’ (which led to the book Howard edited, People Power: Unarmed Resistance and Global Solidarity). Before that there was the Nonviolent Action Research Group (1994-1999), which led to a book (Challenge to Nonviolence) edited by Michael Randle, and which also led to the Gathering Visions, Gathering Strengths events.

The symposium was put on by two organisations, the Coventry Nonviolence Research Group (CNRG) and the Washington-DC -based International Centre on Nonviolent Conflict. Andrew Rigby, another organiser and also a PN board member, explained that the CNRG was set up with charitable funding to develop and promote the study of and research into nonviolent approaches to the pursuit of peace and social justice/change.

CNRG is formally an outgrowth of Coventry University’s Centre for Peace and Reconciliation Studies (CPRS), many of whose students attended the symposium. The event was called a ‘symposium’, Andrew explained, because it was a closed event for invited participants. When asked about the budget of the event (main item: getting over 30 internationals to the UK and back), Andrew preferred to draw a discreet veil, saying only that the costs were shared between the two sponsoring bodies. Two other key organisers were Marwan Darweish from Palestine and Diego Checa Hidalgo from Spain, both based at CPRS.

I’ll end with my second-favourite line from the conference, also from Egyptian Mohamed Moghazy. Describing the role of fear in a dictatorship, Mohamed said that, in a zoo, the trainer will use a very thin rope to tie a baby elephant. Even when it is full-grown and huge, the elephant will still not break the same thin rope. It has become trained. What happened in Egypt in January 2011 was that: ‘The new generation broke the rope’. 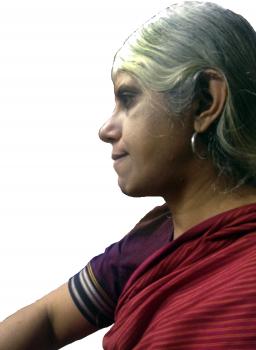 Inspirational Indian activist and researcher Bela Bhatia gave the symposium a flavour of current Indian nonviolent initiatives (including the mass Kashmiri uprising in 2010), and a stark depiction of Indian state terrorism against indigenous peoples, as part of her response to Indian author Arundhati Roy’s remark that:

‘Nonviolence is a piece of theatre. You need an audience. What can you do when you have no audience?’

This statement, for Bela, reduced nonviolence, instrumentalised it:

‘For those who practice nonviolence with their being, it is the only way.’ Bela noted that, in India, ‘nonviolent movements seem easily to NGO-ise’, and they are ‘corrupted’ by that: ‘We need a do-or-die movement like the Maoists’.

Joyce Mbwesa: I come from Kenya, I work with the University of Nairobi as an academic.

It’s so real what we are doing. For so long, many countries, many people, many missions, have been living in the bondage of silence because we are afraid of talking, we are afraid of coming out and saying what we feel about issues…. because of some fear and it’s such a barrier to act –whether violently or nonviolently, it’s a real barrier to act. And so I was very, very keen to come and just to learn how to overcome this fear, which I personally have, it’s true – I really do have the same fear. And it would be very exciting for me to leave this conference with some courage to say: ‘Yes, I can now face it!’

Diana Francis: I feel excited [about the Symposium] because it seems to me that there’s been an academic world which has focussed very little on ‘nonviolent resistance’, it’s largely been about a slightly more comfortable thing: ‘conflict resolution’ – and that there’s been a confusion between the idea of conflict and the idea of violence.

So, actually facing up to the fact that there sometimes needs to be conflict, that things are not always equal in terms of power, or morally equal, and sometimes there are things to be struggled for, I think that’s really important to take into the academic world and to into the world of the ‘respectable’. To challenge too-easy assumptions that you can just immediately cooperate and resolve.

Janet Cherry: I’m from Cape Town [South Africa] originally.… Fear is an issue which we’ve dealt with in training, so the CANVAS [Centre for Applied NonViolent Action & Strategies] training manual has a whole section on managing fear and preparing…. So I’ve dealt with the issue in a very practical, applied sense.
But this conference actually got me thinking of the more private and psychological aspects of fear and how people cope with it for many years actually.

Adrian Dennehy: I have a background within the [British] military, and I started the MA programme [in peace and reconciliation studies – at Coventry University] a few years ago now, and it opened my eyes to a different way of looking at conflict….

From a military perspective, the fear of failure, the fear of losing [is central], and I think that translates across to the nonviolent perspective as well: that the movement will succeed and will not fail.

Rachel Julian: What is remarkable about this conference is that huge wealth of experience and ability and imagination and courage [that is here], that actually means that this is why nonviolence is still going on, because a lot of the people at this conference have overcome their fears in order to do very radical, very new, very innovative – very scary things….

Some of these people live with daily violence and fear of death which we don’t here in the UK and they’re still doing it. And actually it can be done.

Ruth Hiller: I come from Israel and I’m a member of New Profile which is the movement to demilitarise Israeli society…. I think what I want to bring here is the importance of talking about fear.

I think it’s not a given, it’s not something you usually talk about…. What does fear do? How does it mobilise people? And also the intelligence of fear: sometimes using fear to sometimes do smart things, to save your children. To be intelligent for their safety is very, very important also.

My mobile phone during the three days of the event (I think the hashtag #nvnofear briefly trended on Twitter as a result). Sometimes I was getting a tweet out every 90 seconds. Here are some of the tweets… about tweeting.

‘Bela: Mil, you’ve misunderstood Twitter. It’s for occasionally commenting, not continuously reporting. Too much!’ 9.13am, 12 April.

‘In the break, Stellan Vinthagen said: When in one group, I can follow what is happening in the other group through your tweets!’ 3.20pm, 12 April.

‘Howard: My partner in Spain has been saying what great resource the tweeting has been, especially Mil.’ 5.08pm, 12 April.

[As Howard said this, someone at the back shouted out: ‘Mil, are you tweeting that?’ I shouted back: ‘Yes.’] 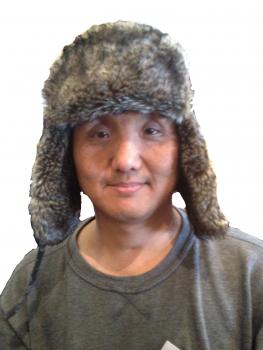 Milan Rai is a PN co-editor. His photos of symposium participants wearing a furry hat, and his collected tweets from the symposium are on the PN website here