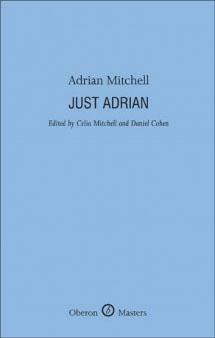 ‘Writing is a lonely business and the theatre is a collaborative art. Adrian was a social animal and a political one. He believed in the power of poetry and theatre to change the world. This was a deeply-held belief, not naive. He knew the limits but he never lo#st the faith. He had a passionate belief in music/theatre, in the use of song. He worked with musicians and composers of all kinds, both classical and popular. He loved working with groups of people.’ – Celia Mitchell, Introduction.

This collection of Adrian Mitchell’s theatre writings reveals profound changes in the theatre world since his first involvement in 1956 in Oxford. There he saw Joan Littlewood’s stage version of The Good Soldier Schweik. This was a Theatre Workshop production – the company formed by Joan Littlewood and Gerry Raffles in 1946.

Most theatre at the time was drawing-room farce in evening dress, with actors speaking with clipped tones and emotions. Theatre Workshop were the future. In Cornwall, FootsBarn Theatre, founded in a barn by Oliver Foot, exemplified that same spirit of group work and spirit. 7:84, founded by John McGrath (7% of people own 84% of the wealth), were based in Scotland. Welfare State International were in Lancaster. Hull Truck Company were... in Hull... and so many more were performing in village halls. And in their own marquees or smaller tents.

Adrian’s first major theatre work was for the now legendary director/producer. Peter Brook, rewriting Marat/Sade, including songs. It was a brilliant production starring Glenda Jackson. Then he travelled to Bradford to work with art school lecturer Albert Hunt (who went on to become the Peace News theatre writer/critic) doing group work. Another Peter Brook play, US, followed in 1966: a satire on the vicious Vietnam War, with songs from AM. It is hard to imagine how dull and how censored theatre was until the abolition of the lord chamberlain, whose job it was to read all theatre scripts for obscene or seditious material. (Remember, at this time it was still illegal to have an abortion, to attempt to commit suicide, to practise male-to-male sex... even hanging went on until 1964!)

Tyger was AM’s first complete play. It was commissioned by Ken Tynan for the new National Theatre on the South Bank (of the river Thames). A celebration of William Blake’s life and work, it is a tribute to Adrian’s ideas as well as Blake’s!

AM was always involved and concerned to have songs in his plays – from the Spanish Golden Age of Calderon and Cervantes, to the children’s plays and adaptations like Alice in Wonderland and The Lion, the Witch and the Wardrobe. Some 80 plays are listed in this great collection of jottings, essays, interviews and advice to actors.

AM was a very English Brecht, an English Neruda, always committed to peace and freedom, a pacifist and anarchist who performed at countless CND demonstrations. Indeed the final time I met him with Celia was at Aldermaston nuclear warhead factory in Easter 2008. He was one of the pioneer poets who felt performance/readings at public events were as important as publication.

From his first book of poems in 1964, Poems, to his last Tell Me Lies, there were ballads and blues aplenty.

Since his death there have been three more books, children’s poems, myths and legends, and this handbook for today’s students and lovers of theatre and poetry.

I was lucky enough to see Marat/Sade at the Aldwych Theatre in 1964, and US in 1966, those two unique Peter Brook creations . I often heard Adrian’s powerful poems and fortunately you can still do so on CD, on YouTube and via the internet. Seek out his work. His ideas are alive and well. Peace News remembers him as, alongside playwright John Arden (whose obituary appeared in PN 2545) he contributed a Personal Column as well as poems.

Get this book for your grandson, daughter, for your pocket. It is a fine introduction to living theatre.