Ruaridh Arrow (dir), How to Start a Revolution 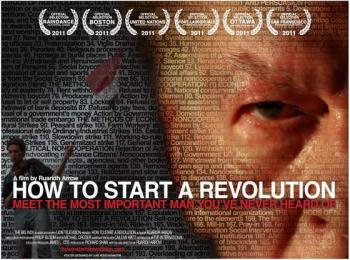 A common argument in the leadup to the 2003 invasion of Iraq was that Saddam Hussein could only be toppled by a foreign invasion, that it was impossible for Iraqis themselves to remove such a brutal dictator.

An insightful and stirring look at the life and work of Gene Sharp, How To Start A Revolution demolishes this argument. Countering the widely accepted view of nonviolence as hopelessly naïve, the 84-year-old professor of political science has spent his life documenting the numerous examples of nonviolent resistance that have successfully overthrown dictatorships across the world.

A quote from Sharp opens the documentary: “Dictators are never as strong as they tell you they are, people are never as weak as they think they are.”

But the plainspoken Sharp is more than just a historian of popular struggles. Rather, books such as From Dictatorship to Democracy (1993) serve as “how to” guides for those working to topple autocratic regimes. As the film explains, this book alone has been translated into more than 30 languages and been read and acted upon by key players in the Arab Spring, the “colour” revolutions in Eastern Europe and beyond, and the Green Movement in Iran.

With the narrative switching from scenes of Sharp serenely watering his orchids in his Boston townhouse to frenetic footage of protests across the globe, director Ruaridh Arrow has created a moving portrait of arguably the most influential living proponent of nonviolent social change. And although the focus is exclusively on how Sharp’s work has inspired uprisings against authoritarian regimes, the documentary includes much of interest to activists working for progressive change in Western democracies.

For example, one of the ten lessons that serve as chapters in the film, is simply: “Plan a strategy”. Sharp argues that the Chinese students occupying Tiananmen Square in 1989 may have been courageous, but disastrously they had no plan of action. “The attitude that you simply improvise and the improvisation will bring you greater success is nonsense”, he says. “It’s exactly the opposite. If you don’t know what you are doing you are likely to get into big trouble.”

A welcome attempt to popularise important ideas which have received relatively little attention in the US and UK until recently, How To Start A Revolution is essential viewing for activists and the general public alike.