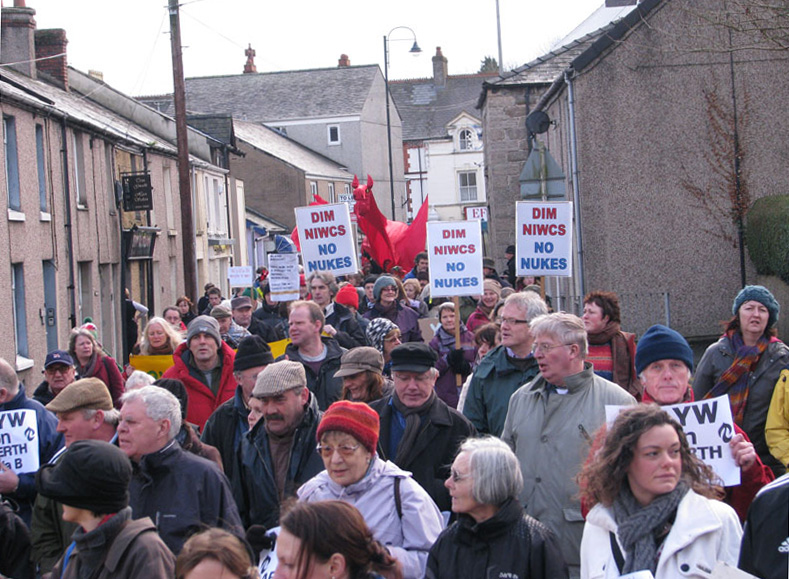 From Hinkley Point in Somerset to Wylfa in the far north of Wales, the campaign against a new generation of nuclear power stations is heating up day-by-day. 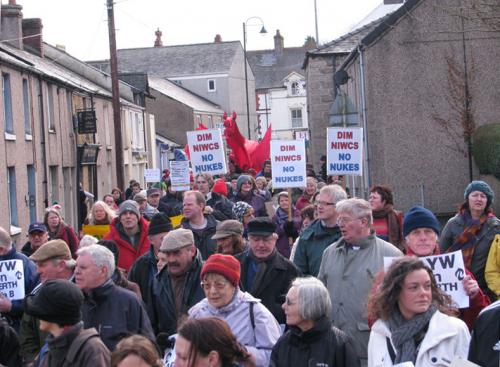 About 300 demonstrators braved the rain and gloom of a January Saturday afternoon to march through the streets of the small market town of Llangefni, on the Isle of Anglesey, in order to express their support for the Jones family of Caerdegog. These determined farmers are refusing to allow their land, which has been in their family for about 300 years, to be grabbed by Horizon Nuclear.

The broadening of support shown in the march was significant. As well as local campaign group PAWB (People Against Wylfa B) there were members of SWAN (South West Against Nuclear), CND Cymru, campaigners from Hinkley Point, spooky Rebel Clowns – accompanied by a magnificent red dragon, last seen at Faslane! – and local members of farmers’ unions. The radical Welsh Language Society, who fear the impact of Wylfa B on the language and culture of the island, were coorganisers of the rally.

Speakers at the rally emphasised that, with the withdrawal of Germany from the nuclear race, the UK was now in the front line of the struggle against this dangerous and expensive technology and the global proliferation of nuclear materials. Anxiety was expressed about the sheer size of the proposed new development, and the fact that its spent fuel (twice as radioactive as the current stuff) will have to be dumped on site for over 150 years, being too “hot” to handle.

The next treat in store for the residents of North Wales was an official visit by the Health and Safety Executive’s office of nuclear regulation. The idea was (as they let slip informally before the meeting) to take a few photos to show that they were “consulting”!

The meeting was not minuted – so much for transparency. After – and during – an hour of public relations spiel, the ONR speakers faced a barrage of questions from