Paul Mason, Why It's Kicking Off Everywhere: The New Global Revolutions 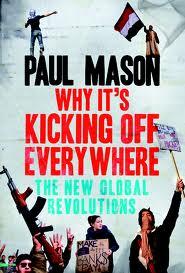 As the BBC Newsnight economics editor, Paul Mason has become a familiar face on television over the last few years, reporting on the protest movements, revolutions and revolts that have been “kicking off” across the globe since 2009.

Mason is also a keen blogger, and it is these (albeit now cleaned up) postings that form the backbone of this electrifying new book.

The essence of his argument is that “we’re in the middle of a revolution caused by the near collapse of free-market capitalism combined with an upswing in technical innovation, a surge in desire for individual freedom and a change in human consciousness about what freedom means.” This isn’t social science, says Mason, “it’s journalism.” And what engrossing journalism it is. Travelling from Syntagma Square to Tahrir Square, to Manila slums, to the poverty-stricken American West and then back to the 2010 student protests in the UK, the Newsnight regular has written a book bursting with ideas and arguments.

At one point he sees fit to include a short discussion of a 1968 article from the American Historical Review on left-wing politics in the French region of Languedoc between 1848-51.

Elsewhere, Rimbaud, Chomsky, Mario Savio, Glenn Beck, CLR James, the shadowy “Gladio” network and an article from the Journal of Computer-Mediated Communication are all referenced.

This is exciting, heady stuff.

Arguably Mason gets a bit too wrapped up in the excitement at times. Certainly, his gushing descriptions of the young people at the centre of events are perhaps a little wide-eyed. His fervour for the social media and “networked individuals” that have revolutionised protest politics is equally impassioned. For Mason, the Egyptian uprising was “a revolution planned on Facebook, organized on Twitter and broadcast to the world via YouTube.” But what about the fact that 44% of Egyptians are illiterate or semi-literate and 40% of the population live on less than $2 a day?

Undoubtedly written for a popular audience, Why It’s Kicking Off Everywhere is nevertheless a treasure trove for activists, whether actively involved in the campaigns described or not. Closer to the politics of the street than any other mainstream journalist currently working, Mason has much to say on the current state and future of protest.

An important, consistently thrilling book for all those who wish to get their heads around the fast-evolving events of our tumultuous times.