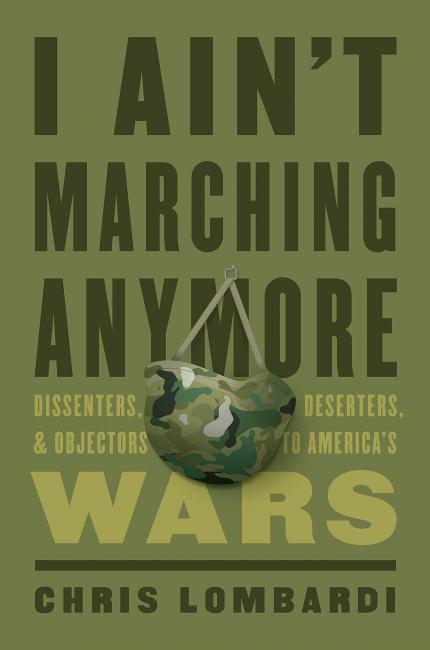 ‘Does it not appear that the cause of all wars was and is: That the whites have always been the aggressors, and the wars, cruelties and bloodshed is a job of their own making and not the Indians?’ This statement by activist William Apess in 1836 could describe the US military at any time since its inception during the War of Independence, and is often at the heart of the dissent that Chris Lombardi documents in this book.

Beginning with the battlefield conversion of Lutheran Jacob Ritter during the War of Independence and ending with the re-incarceration of Chelsea Manning in 2020, I Ain’t Marching Anymore charts the important history of resistance to the US military from the 18th century to the present.

I have to admit, though, that it took me ages to get going with this one.

The author’s journalistic tendency to start anecdotes halfway through before returning to the beginning probably works well in a feature piece, but less well in book documenting so many stories in such detail.

I frequently found myself losing my way in the early sections, which assumed a detailed knowledge of US history, forcing me to check Wikipedia more than once. Thankfully, as we moved to more recent history, it became more accessible, and I was able to put the earlier chapters in context.

I’m very glad I persisted because Lombardi has found many tales worth telling. A running theme is how often military personnel are mistreated, resulting in mutinies over food or conditions post-revolution, over Jim Crow laws after the civil war, or more recently campaigns against sexual abuse of women and homophobia.

Another consistent pattern shows how the experience of war itself can drive veterans to work for peace on discharge, many of whom stick around to coach the next generation of resisters.

And there are the individual courageous actions of those who exposed war crimes, such as captain Silas Soule who exposed the Sand Creek Massacre in 1864, Daniel Ellsberg during Vietnam, and more recently Chelsea Manning and Edward Snowden (the latter a CIA employee at the time).

While it does sometimes overwhelm the reader with the sheer volume of its research, in the end, I Ain’t Marching Anymore shines a light on a vital truth.

The United States is a nation built on a contradiction – a constitution preaching equality, in a country run by slave-owners who pursued genocide against the Indian nations.

In its nearly 250-year history, the US has consistently failed to live up to its ideals, particularly during times of war, but there have also always been citizens willing to take risks to hold it to account.

The cumulative power of their actions show us that a different United States is always possible – and gives us the hope that one day, it might finally be achieved.