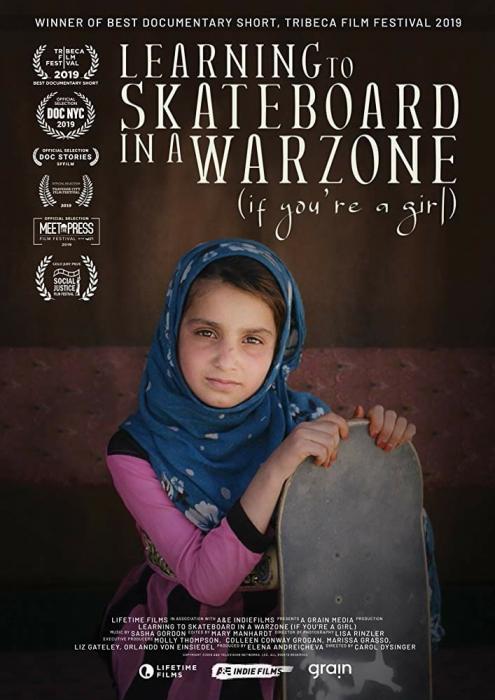 Skateboarding is a global language, over the years it has reached unimaginable places. It has allowed new generations, cultures, and traditions to resignify the environment in which they find themselves and to see in the skateboard a place to excel and express themselves with the freedom of athletes.

Although it is true that Afghan culture has been exposed to an insurmountable war, the most affected have been its population who, without opportunity and in extreme poverty, have had to get ahead as a society and coexist in a war of several decades and with a balance sheet showing more than 32,000 civilians dead and more than 60,000 injured to date.

‘Most women are never taught to read. Girls are often forced into early marriage. For many, violence is a threat inside and outside the home.’ With this phrase, director Carol Dysinger begins the documentary, Learning to Skateboard in a Warzone (If You’re a Girl), that shows the opportunity offered to a group of girls in Kabul, so that they can have access to public education as well as using skateboarding as an incentive for teaching and improvement.

‘We teach children from poor places and streets who did not start school before. It’s safe here for girls to learn. And we teach them skateboarding,’ says one of the girls who run this project called Skateistan. That’s alongside reading, writing, maths, and other subjects.

Skateboarding lessons begin learning to climb the skateboard, and include ‘Five Foot Positions’ and how to ‘Tik Tak’. The documentary not only focuses on showing the foundation’s sports teaching process, but it also focuses on each girl’s lifestyle and the story they have to tell.

‘I love sports and I like to work with children,’ says the Skateistan organiser who gladly told her story and that of her school, without showing her face in the film. In addition to not having financial resources, many of the girls come from very conservative homes, with closed and very strict minds and rules.

Reihana, one of the girls of this school, says that she is from a family of 11 brothers and sisters. The team asks her why her sisters are not in Skateistan, to which she replies that her sisters are not allowed: ‘Because where I live, it’s a tradition that when a girl grows up, she doesn’t go outside. If a girl goes out, everyone says “Oh, my god, that girl went out.” Girls older than me don’t go outside.’

It is worth mentioning that her sisters at the time of this documentary were 13, 16 and 18.

‘I don’t want to grow up, so I can skate forever,’ says Reihana. Skateboarding allows her to feel something completely different from what she lives day by day in a war zone.

It was inevitable that boys would feel the presence of these girls, who have been able to go out into the streets to learn, knowing that soon, when they grow up, this possibility will be taken from their lives.

Several of the mothers of these girls were in a position to tell their story in front of the cameras. They all agreed on the same story, the war, the lack of opportunities, and the decision: ‘We’re illiterate, and don’t know anything, they should be better.’

This film greatly expresses the capacities and possibilities that every human being on earth has to be an agent of change, as well as in Afghanistan, the process of adaptation of a woman in society has been a controversial subject for centuries, as this She has had to fight to be respected, for her autonomy, determined that opportunities must be on equal terms at all times and in all places.

The beliefs and ideologies that are lived in a country like this are completely unfair to girls and with spaces like Skateistan, a door opens to prove that possibilities to grow arise with freedom and happiness. The emotions expressed on the faces of these girls provides an encouraging light to continue the work that allows more girls to ride a skateboard.

Paula Osorio is a skate culture lover and a full-time writer for the magazine, which is published by SHIT®️ Skateboard Company.

This article was originally published in SHIT®️ Magazine.