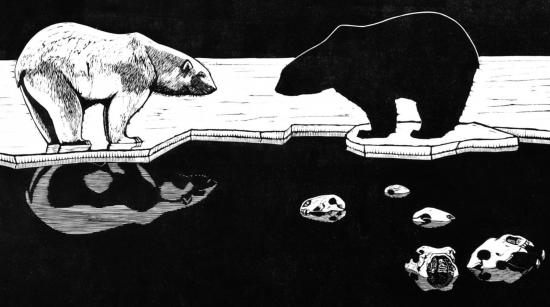 On 22 January, the Treaty on the Prohibition of Nuclear Weapons (TPNW) entered into force. This marks an incredible achievement for activists and movements committed to ridding the world of these abhorrent and destructive weapons.

What this shows is the power of a moral ideal to ignite public imagination and mobilise action.

There are lessons here for climate activists.

The TPNW came after decades of trying to get the nuclear powers to fulfil their commitments under the 1968 Nuclear Non-Proliferation Treaty (NPT) – itself, at the time, a seemingly unlikely Cold War triumph of rapid treaty negotiation.

A bold group of countries including Costa Rica, New Zealand, Mexico, Ireland and South Africa, with the backing of a massive civil society campaign, decided to bypass the obstruction of the nuclear powers and create a new treaty to ban nuclear weapons.

It was the result of a global mobilisation under the umbrella of the International Campaign to Abolish Nuclear Weapons (ICAN), a coalition of more than 500 partner organisations in over 100 countries, including Scientists for Global Responsibility in the UK.

The approach of ICAN, which has an international steering group and a small staff in Geneva, was to use the new treaty to ‘stigmatise, prohibit and finally eliminate’ nuclear weapons. The process of securing the TPNW shows what can be achieved from below.

The treaty finally gives these weapons of mass destruction a similar legal status to biological and chemical weapons. It prohibits signatories from preparing to use nuclear weapons, actually using them or assisting others (states or non-state groups) in such actions.

Not only is this story captivating for peace advocates, it is providing inspiration for people concerned about the climate emergency.

A growing number of people, politicians and leaders, such as the former president of Ireland, Mary Robinson, are lending their support to the idea of a new treaty to fairly leave large swathes of remaining fossil fuels in the ground.

The idea that the threat of climate breakdown is comparable in its devastation to nuclear war is backed by the UK’s foreign office (whose minister of state, baroness Anelay, drew explicit parallels); its former chief scientific officer, sir David King, and the World Economic Forum, among others.

Comparisons have already been drawn between much-needed climate action and the NPT, with its three pillars of non-proliferation, disarmament and peaceful use.

This represents a new approach to tackling climate change which complements and reinforces, rather than displacing, existing agreements.

We need to start using the F-word much more: fossil fuels.

The Paris Agreement does not even mention fossil fuels.

The deliberate neglect by the climate regime of the largest source of greenhouse emissions is as shocking as it is unsurprising in a world in which fossil fuel lobbies still wield such power and have delayed effective climate action for so long that climate chaos is now upon us.

These companies have long wielded such power. But if further evidence of their influence were needed, it is observable in the distribution of bail-out funds in responses to the COVID-19 crisis where G20+ countries have so far pledged over $207bn to fossil fuel projects.

It is time to reign in the power these actors have over our collective fate.

Just six oil and gas companies hold reserves that, if burned, would collectively use up more than a quarter of the remaining 2ºC budget – let alone the budget for 1.5 ºC.

Half of the estimated emissions were produced in the past 25 years, when the scale of the climate threat was clear.

This long-neglected ‘supply-side’ approach needs to occupy a central place in our efforts to address climate change – starting with the 2021 Glasgow climate conference.

The Intergovernmental Panel on Climate Change (IPCC) published a Special Report: Global Warming of 1.5 ºC in October 2018. This report makes clear that realising the ambition of the 2015 Paris Agreement to keep global warming below 1.5 ºC requires deep and rapid decarbonisation.

A crucial yet neglected aspect of this is the need for international agreements and law which effectively and fairly leave large swathes of remaining fossil fuels in the ground. A Fossil Fuel Non-Proliferation Treaty (FF-NPT) could fulfil that purpose.

Such a treaty could have three pillars modelled on the Nuclear Non-Proliferation Treaty.

The first is non-proliferation.

This would imply a moratorium on further expansion in rich OECD+ countries. This would be underpinned by a model-driven assessment of which reserves of fossil fuels should be un-burnable carbon and need to stay in the ground to be Paris-compliant.

This would underpin negotiations about the sequencing of commitments regarding different fossil fuels.

The second pillar is disarmament, which here refers to the accelerated phase-out and managed decline of existing investments and infrastructures in fossil fuels.

It would be underpinned by the principle of a Just Transition. This would address the historical responsibility of richer countries for past emissions. It would also take into account how much capability different countries have to diversify away from fossil fuels – and provide support for some countries to do so.

The third pillar is peaceful use.

This refers to financial and technological support to developing countries to adopt renewable energy pathways.

This would be achieved by redirecting finance from fossil fuels into a global transition fund to finance technology, retraining and compensation. This would redirect both public and private finance, including the $10-million-a-minute that the world spends on fossil fuel subsidies, according to the IMF.

This is a bold proposal and opposition will be immense, just as it is to the TPNW.

“The Paris Agreement does not even mention fossil fuels.”

But, really, if not this, then what?

It is clear the vast majority of fossil fuels need to remain in the ground.

Activism and resistance aimed at cutting off finance and resisting new infrastructures on the ground is vital.

But we also need a multilateral approach so that we can fairly agree who leaves which resources in the ground and also help poorer countries meet their energy needs in a lower carbon way.

This would not replace the Paris Agreement but help underpin and enable it.

The FF-NPT also has the advantage of getting to the root of the problem.

There is growing momentum behind the idea and numerous countries now have bans and moratoriums in place on the exploration and exploitation of new fossil fuel reserves.

Notably, this includes countries such as Costa Rica and New Zealand that led the way on the nuclear weapons prohibition treaty.

This is made easier by the falling price of renewable energy and growing recognition among banks and finance that they risk investing in ‘stranded assets’ by lending to fossil fuel producers.

Cities from Vancouver to Barcelona are endorsing the treaty.

Motions have been put down for New York and Los Angeles to follow suit. NGOs and movements, citizens and even some businesses, and an increasing number of politicians, are all lending their support to this proposal.

The Fossil Fuel Non-Proliferation Treaty is an idea whose time has come.

The lesson from the TPNW is not to leave this to governments and the slow pace of diplomacy.

Pressure from below as individual citizens will be vital: supporting the treaty idea, talking to others about it, pressuring politicians to support early day motions backing the idea, building campaigns to get cities to support it, and using our voices within the movements and communities we are part of to demand that we keep climate-destroying fossil fuels in the ground.