Cinzia Arruzza, Tithi Bhattacharya and Nancy Fraser, Feminism for the 99%: A Manifesto 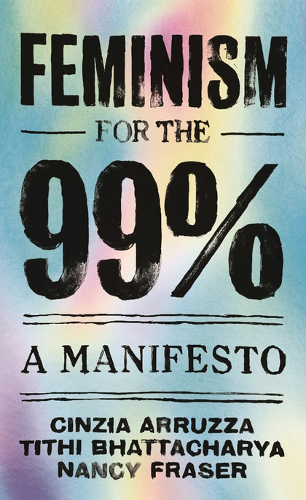 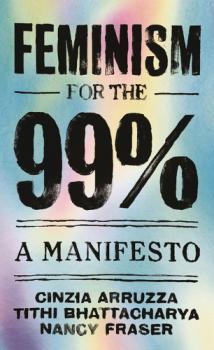 This pocket-sized book, in matt rainbow covers, presents itself as a desirable object to read, Instagram and pass on. It also fulfils the serious promise of its subtitle, ‘a manifesto’, as it makes feminism generally applicable and available – and addresses the crisis of capitalism as a feminist issue.

It opens by contrasting two demands. The chief operating officer of Facebook, Sheryl Sandberg, has called for women to ‘lean in’ – to project confidence and seize opportunities in the boardroom. The authors contrast that appeal with the 24-hour women’s strike in Spain in March 2018 that pressed for an ‘end to patriarchy and capitalism’.

There being no alternatives to these two choices the authors claim to provide a ‘road map’ for the latter, in which to create a feminism that is both anti-capitalist, anti-racist, and eco-socialist.

The first thesis of their manifesto – there are 11 – proposes a women’s strike.

Not the strike of factory workers for better pay and conditions, but a reinvented strike that will expose the invisible, unpaid work that capital relies on but doesn’t pay for.

Drawing on a variety of recent strikes, such as those by Dalit sanitation workers in India and the strikes for abortion rights in Argentina and Poland, the authors expand the scope of feminist strikes beyond paid and unpaid caring work to include campaigns for better education, healthcare, transport and environmental protection.

Theses 5 and 6 confront the gendered oppression and violence that the authors show to be widespread and persistent in capitalist society, which puts ‘the making of profit’ before ‘the making of people’.

Everywhere that women experience violence – in private, in public, in the workplace, and especially where rape is weaponised in war and in modern slavery – the manifesto sees the presence of the coercive element of capitalist society. For instance, in early capitalist society there was a move from extended households to the smaller nuclear family, where the husband now had the right to rule over one person. ‘Discipline’ could became violent and irrational, often growing worse in times of crisis.

As well as covering issues such as sexual liberation, racism, and climate protection, thesis 10 declares solidarity with women affected by war: they are the first to suffer from conflict and the destruction of infrastructure that makes it impossible for them to provide for their families. Such women are not helped by ‘warmongers in skirts’.

The final ‘Post Face’ provides a vital explanation of the background to the manifesto, in which the authors acknowledge their debt to Marx and Engels.

This chapter is a primer on ‘social reproduction’ (the caring work that makes economic production possible: how society raises children and looks after those who need support, organising food, shelter and clothing – ed).

Though not named, the work of second-wave feminist writers such as Maria Dalla Costa, Silvia Federici and Selma James is clearly recognisable here.

I enjoyed some of the book’s subtle features – such as the dedication to the Black feminist political group the Combahee River Collective. There is some excellent writing such as the description of capitalism’s ‘ecological contradiction’, using the world as both a ‘tap’ and a ‘sink’, without looking after either.

Despite its claim of being ‘for the 99%’, the authors do not consistently use plain language. However, the ‘Post Face’ does offer a good explanation of why capital’s separation of unpaid caring work from other types of work – and the exploitation of the women who often have no choice but to do the former – is an essential issue for both feminism and for peace activists.