Mike Berners-Lee, There is No Planet B – A Handbook for the Make or Break Years 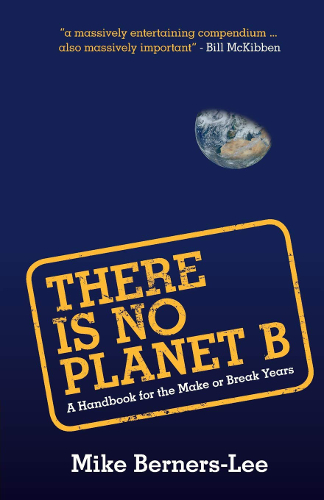 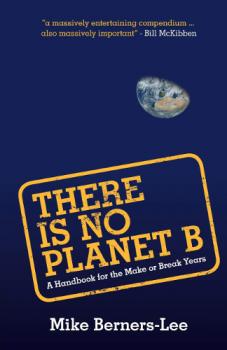 Mike Berners-Lee’s 2013 book The Burning Question (TBQ), co-authored with Duncan Clark, provided a fantastic in-depth primer on the urgent need for the world to quit its addiction to fossil fuels (oil, coal and gas) and the forces that continue to prevent us from doing so.

As such, it remains a must-read title for anyone involved in the climate change movement. I personally know of several campaigners who joined the fossil fuel divestment movement directly after reading it. (TBQ, co-authored with Duncan Clark, is now sadly out of print.)

An academic at the Institute for Social Futures at Lancaster University, Berners-Lee’s latest book is ‘an evidence-based practical guide to the make or break choices’ we now face in responding to our current environmental crises. It recaps some of the material in TBQ, but ranges much more widely.

There is No Planet B takes in such topics as our food, energy and transportation systems, as well as technology, business, work and the values we aspire to live by.

As Berners-Lee explains in the book’s introduction, we are now in a position where ‘if we don’t try hard enough NOT to, we will wreck the whole environment’. And the above topics ‘are too inescapably intertwined for the traditional “one bit at a time” approach to be adequate’.

The book is structured as a series of answers to over 130 questions, arranged by topic, including: ‘When is a “job” a good thing?’; ‘Why is cleaning our electricity just the easy part of the transition from fossil fuels?’; and ‘When is wealth distributed like the energy in a gas?’

It also includes an invaluable appendix on climate change (the 14 points ‘every politician needs to understand before they are fit for office’) and an ‘alphabetical quick tour’ of some of the book’s key arguments.

Some ideas may be familiar (generally speaking, eating meat and flying are bad) but the detail is fascinating.

Some of the analysis certainly deserves to be more widely known. For example, apart from air-freighted food, ‘food miles’ contribute only a tiny proportion of the carbon emissions bound up in our food.

The emphasis is on climate change but other crises (species loss, ocean acidification and air pollution) also get a look-in.

Berners-Lee also has some (to my mind) sensible – and no doubt controversial – things to say about the vexed issues of nuclear power and population.

As in TBQ, the so-called Jevons Paradox is central, with ‘game-changing implications for energy and climate policy’. The Jevons Paradox is the fact that ‘energy efficiency leads, by default, to an increase in total demand, rather than the decrease that is often assumed’.

Likewise, the fact that ‘the past 150 years of energy history tells us that that the arrival of new [energy] sources have dented but not stopped the growth of [old ones]’, leads to the big question: will we have renewables as well as or instead of coal, oil and gas?

If it’s going to be as well as, then we can kiss goodbye to keeping a lid on global heating. But if it’s going to be instead of, then we need to place major restraints on the use of fossil fuels: effectively – and rapidly – phasing them out.

A continuation of the current growth rate in humanity’s energy usage (which has averaged 2.4 percent per year for the last 50 years) would mean us using seven times as much energy in 2100 than we do today.

Berners-Lee admits that he has no crystal ball, but says that he would be surprised if one of the two following scenarios did not take place this century:

(1) ‘a major crash of human civilisation’ owing to our failure to deal with our mounting ecological crisis; or

(2) ‘our species matures [and] we come to understand that ‘growth’ is no longer about getting more in terms of physical power’.

In this connection, Berners-Lee’s nuanced summary of the current state of knowledge regarding the climate science is worth quoting at length – not least because it provides a useful corrective to some of the more alarmist claims that are now receiving widespread publicity.

One example of the latter is XR co-founder Roger Hallam’s claim, on the BBC’s HARDtalk programme, that ‘the science predicts’ that six billion people will die this century because of climate change if we remain on our current trajectory.

Berners-Lee writes: ‘In truth, no one really knows how bad the consequences of any particular temperature rise might be. We don’t have a good understanding of the various potential tipping points that we might trigger in the environmental system, nor how successful humans might be at dealing with them.

'The uncomfortable truth is that when we meddle with the climate, we play with stuff that we don’t really understand and which can’t be put straight if we mess up. Even 1.5ºC might be enough to trigger some dramatic change in climatic conditions, such as an unstoppable flow of methane boiling out of melting permafrost or a collapse of the ocean ecosystem.

'On the other hand, it is also just about conceivable, although very unlikely, that 3ºC might not be too bad to live with. Most climate scientists are confident that 4ºC would have very nasty consequences for humanity.’

In his introduction, Berners-Lee promises ‘perspective-forcing facts, stats and analysis’, and on this front the book certainly delivers. ('Forcing' in climate terms is about the Earth radiating less heat into space than it absorbs from the sun – ed.)

A handful of examples will serve as illustrations.

Though the average human being requires 2,350 kilocalories (kcal) of energy per day, and something like 800 million people currently go undernourished, humanity actually grows 5,940 kcal of edible crops per person per day.

In one of the book’s highlights, Berners-Lee shows what happens to this 5,940 kcal per person per day on its journey from field to stomach, revealing along the way:

(a) that ‘the human-edible crops that we feed [to animals] amount to more than three quarters of the calorific needs of the [world’s] entire population’;

(b) that ‘the elimination of household and catering waste in just Europe and the Americas alone would add 10% to the world food supply’; and

(c) three possible ways in which current crop production could be used to feed a projected 2050 population of 9.7 billion (though, of course, continued global heating is likely to have a major negative impact on future crop yields).

Likewise, in the section on energy, we learn that solar panels covering just 0.1 percent of the Earth’s total land surface (an area 228 miles by 228 miles) would be able to meet today’s global energy needs – but also that, at current energy growth rates, we would need every square inch of land mass to do the same in 300 years!

In the transport section, we learn that one square metre of Californian land could be used to grow enough wheat in one year to power a biofuel car to travel one mile. On the other hand, it was equipped with solar panels, that same square metre could collect enough solar energy in a year to power an electric car to travel 1,081 miles – or an electric bike to travel a whopping 21,243 miles!

Though still interesting, the book’s later sections, on economics, business and work, are decidedly sketchier than the earlier ones on food, energy and transport. And this reader found at least some of the author’s suggestions somewhat naive to say the least.

For example, at one point, Berners-Lee suggests that: ‘If you work for an organization [that exists primarily in order to make profit], please challenge it and/or leave it.’ Nice work if you can get it (and/or leave it)!

Nonetheless, this remains a book with some big and important things to say about climate change, packed full of interesting facts and analysis. Strongly recommended.