Neil deGrasse Tyson & Avis Lang, Accessory to War: The Unspoken Alliance Between Astrophysics and the Military 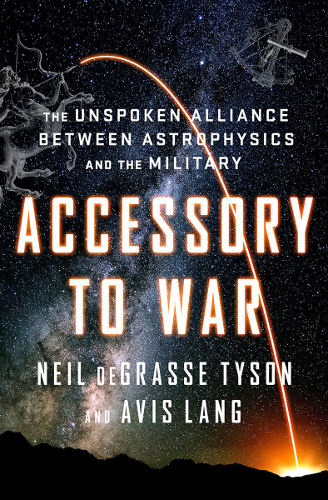 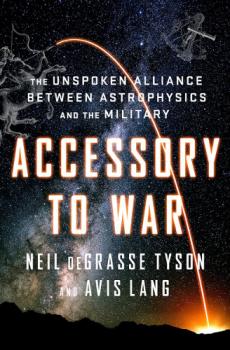 Curiosity blows things up. Or at least, it vaporises interesting rocks using a laser designed by the US nuclear bomb laboratory at Los Alamos.

I am here referring not to the intellectual motivation behind much of ‘pure’ science, but rather to Curiosity, NASA’s robotic vehicle that is analysing the chemistry of Mars. This particular sharing of technology between ‘warfighting’ and the frontiers of science is one of the many diverse and disparate facts that you might glean from this wide-ranging book by historian Avis Lang and her astrophysicist and science-communicator colleague Neil deGrasse Tyson.

Firstly, the authors do not claim that astrophysics (roughly speaking, that part of astronomy that investigates the nature of stars and other celestial bodies, rather than focusing on their positions and motions in space) has a unique complicity in war. Indeed, they include examples of even Picasso and Leonardo da Vinci being co-opted by military power.

Secondly, do not expect any Snowden-style exposés of ‘unspoken’ collusion between astrophysics and the military (unless I missed them because they’re concealed in the copious endnotes). So far as I could tell, the book draws upon previously-published accounts.

This book is best read as a responsible attempt to inform a general audience, prompted by the authors’ anxieties about global insecurity and the Doomsday Clock* now standing at two minutes to midnight.

The absence of a strong prescriptive thesis in the book leaves the reader free to draw their own conclusions.

Personally, I found that the multiple sections, each made up of a montage of stories and statistics, without clear introductions or summaries, made it hard to discern the authors’ direction of travel, or know what was a digression and what, if anything, might be relevant later. Early chapters cover Hitler’s horoscope, a history of maritime navigation (referencing Dava Sobel’s book, Longitude) and 17th- and 18th-century military applications of the telescope!

Concrete links with astrophysics have to wait until the middle of the book. A favourite example is ‘adaptive optics’, a technology that the military developed to compensate for the ways in which the earth’s atmosphere distorts light passing through it.

Once this was declassified in the 1990s, the techniques used were adopted in observatories worldwide. That the 250-foot-wide dish at Jodrell Bank in Cheshire is mounted on navy-surplus bearings seems insignificant, but perhaps we could have read more about how such radio telescopes are used to track satellites and missiles if only the information weren’t classified.

Gamma-ray bursts (extremely energetic explosions in distant galaxies) were accidentally discovered in the 1960s by US satellites looking for nuclear test ban violations. And the first infra-red sky map was developed to help heat-seeking missiles distinguish between targets and the stellar background. Modelling nuclear reactions in stars and bombs gets a brief mention in the final chapter.

Sadly, there’s more of an emphasis on the technologies than on the big arms companies paid huge sums to develop them. Raytheon’s radar tech gets used in microwave ovens and weapons used to burn a crowd’s skin. The body of the Hubble space telescope was based on a KEYHOLE spy satellite manufactured by Lockheed Martin. And yet another arms company (Northrop Grumman) is, in its words, ‘lead[ing] the industry team’ to build Hubble’s successor (the James Webb space telescope), though, at $9bn, the latter’s cost represents ‘less than 2 percent of [Grumman’s] annual sales’.

As is well-known, GPS was first created for the US military, but has now become so important to daily life – because of its use in shipping, transport and mobile phones – that it is supplemented by Europe’s Galileo and Russia’s GLONASS satellites.

However, I’m still not convinced that military demands are such an important driver of science or consumer technology. The war–science relationship is sometimes described as a two-way street, but the public evidence suggests something more asymmetric: ‘science piggybacks on geopolitics’.

The reach of geopolitics through time and space might seem overwhelming to many of us, but appear insignificant to an astrophysicist. Lang and Tyson invite us to reaffirm the perspective of the astronaut (to whom national boundaries are invisible) and the types of international co-operation that are necessary for the pursuit of knowledge.

The authors are probably right that scientists generally have ‘anti-war’ perspectives, and that graduates are seduced into ‘dual-use’ corporate research from a simple desire to discover. However, they provide no advice as to where to draw the line between research that nurtures peace and that which risks escalation.

Tyson does relate some of his own reactions during the 2003 invasion of Iraq: initially alienated by protesters at a Space Foundation event in Colorado, and then sickened as the attending manufacturers applauded each mention on CNN of a US weapon used in Baghdad. (On the other hand, Arthur C Clarke claimed that the British Interplanetary Society cheered when they first heard Wernher von Braun’s V-2 rocket hit London; Lang and Tyson quote as fact von Braun’s alleged 1944 quip that the V-2 ‘worked perfectly except for landing on the wrong planet’.)

Maybe the most useful chapter for peace activists is the one on UN space treaties, the ‘high-water mark’ of which was the Outer Space Treaty of 1967 which, among other things, banned nuclear weapons in orbit. Tyson and Lang outline the scope for much greater agreement and co-operation in use of space, while also highlighting the fact that space-borne weapons are still very far from becoming a reality, whatever contracts may be being sought by the aerospace industry.

Carl Sagan, Tyson’s predecessor as presenter of the US TV series Cosmos, raised the issue of ‘nuclear winter’ and warned that ‘Star Wars’ ‘missile defence’ was a dangerous illusion.

Like Sagan, these authors do not have the power directly to shift funding to pure research and public need. Rather, they can show that the US cannot prevent other nations’ access to space without increasing risks to its own interests, including to its string of valuable and vulnerable satellites, a quarter of which are military. Space infrastructure is delicate. No matter how much is spent on escalation and turning space into a new theatre of war, offensive capability will always exceed the defensive.

In June 2018, US president Donald Trump called for a ‘Space Force’ to secure ‘American dominance in space’. Maybe this book, published a few months afterwards, pre-empts rather than reacts to this pernicious fantasy – which, like missile defence, is promoted by generals, the aerospace industry and the RAND corporation. It is an illusion which, the authors suggest, is facilitated in the US by its population’s relative insulation from the horrors of war.

One of the pair’s conclusions is that ‘dominance cannot be the cornerstone of security in an interconnected world’. A tighter focus on this point – as well as on the interests that are lobbying for such dominance regardless – would have produced a different and a shorter book. Someone should write it.

* A metaphorical clock, created by The Bulletin of the Atomic Scientists, used to show ‘about how close we are to destroying our world with dangerous technologies of our own making’. See here.