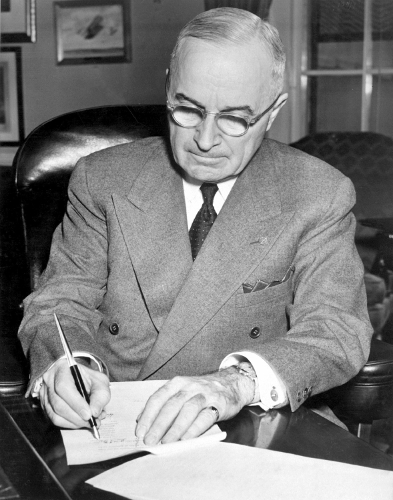 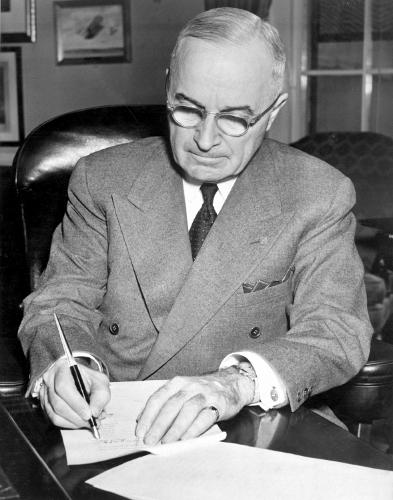 President Truman signs a proclamation initiating US involvement in the Korean War. Photo: US National Archives

As we head towards another inconclusive summit between North Korean leader Kim Jong Un and US president Donald Trump, here is some inconvenient background that is unlikely to feature in mainstream coverage of the meeting. We recommend you take the time to forget each of these facts. The media already has.

Why is Korea divided?

Korea was a united nation-state for over 1,000 years. Then the Soviet Union declared war on Japan on 8 August 1945, and began moving into northern Korea across their narrow common border. Korea was at the time occupied by the Japanese.

The US had made no plans for dealing with Korea and went into a panic. At midnight on 10 August, two US lieutenant-colonels were ordered to define a US occupation zone to prevent the Soviet Union occupying the entire country before US troops could land there.

Dean Rusk and Charles Bonesteel decided that the capital of Korea should be in the US sector and seized on the 38th parallel. This was defined as the ‘line of control’ in a US order, and was observed as a boundary by Soviet forces (who could have taken most of Korea).

This meant that the US zone ended up with most of the Korean population, the capital, and half the country’s territory, simply by demanding it. The Soviets did not challenge this division because it was meant to be very temporary.

In September 1947, the Soviets proposed that both US and Soviet troops withdraw, allowing Koreans to form their own government. The US refused.

Elections were held in the South only, and led to the declaration of the Republic of Korea on 15 August 1948. The Democratic People’s Republic of Korea, in the North, was announced on 9 September 1948.

In late 1947 and early 1948, the governor of Jeju Island, Yu Hae-jin, led official and unofficial right-wing terrorism against the island’s people. That was the view of a US military investigator, whose call for Yu to be dismissed was overruled. The US counter-intelligence corps called Yu an ‘extreme rightist’, adding that he was ‘ruthless and dictatorial’.

US authorities brought ultra-right thugs ‘the Northwest Youth’ into the police and constabulary where they tortured and killed with impunity. The Jeju uprising in April 1948 was brutally crushed, with over 30,000 people killed out of a total population of 300,000. More than 70 percent of the island’s villages were burned, and 20,000 homes destroyed.

US historian Bruce Cumings said in 2017: ‘It now is clear that a merciless, wholesale assault on the people of Jeju Island occurred under the direct leadership of the American Military Government.’

“On 6 April 1951, Truman signed an order that atomic weapons should be used against Chinese and North Korean targets.”

In 1998, Cumings had written: ‘The primary cause of the South Korean insurgency was the social inequity of land relations and the huge gap between a tiny elite of the rich and the vast majority of the poor. The North Koreans were barely involved, and indeed the strongest leftwing regions were precisely those furthest from the 38th parallel’, like Jeju.

He added that it was on Jeju ‘that the postwar world first witnessed the American capacity for unrestrained violence against indigenous peoples fighting for self-determination and social justice.’

There’s a lot to say about the Korean War (1950–1953), which was a civil war with massive foreign involvement, in which the atrocities of the South Korean government were ‘much worse’ than those of the North Koreans. That is a quote from Bruce Cumings’ North Korea: Another Country (New Press, 2004).

The war was not, for the most part, a defensive one. Three months in, by the end of September 1950, US forces had expelled North Korean troops from all of South Korea.

Instead of claiming victory and re-establishing the 38th parallel, the US tried to conquer North Korea, keeping the war going till July 1953, raining destruction on North Korea, blowing up or burning down most structures in the country.

Cumings points out that if the US had stopped the war in September 1950 the death toll would have been less than 250,000 on all sides.

Instead, another three million North Koreans died – plus another million South Koreans, nearly a million Chinese ‘volunteers’ (sent to defend North Korea) and 52,000 more US soldiers.

‘And the war ended where it began’, Cumings adds, with a line of division nearly exactly the same that existed in September 1950.

On 30 November 1950, US president Harry Truman gave a press conference in which he was asked if there was ‘active consideration’ of the use of the atomic bomb in the Korean War.

Truman answered: ‘There has always been active consideration of its use. I don’t want to see it used. It is a terrible weapon, and it should not be used on innocent men, women, and children who have nothing whatever to do with this military aggression. That happens when it is used.’

Declassified documents make clear that the use of nuclear weapons was seriously considered throughout the Korean War.

US general Douglas MacArthur, commander of US forces in Korea, raised the idea of using nuclear weapons on 9 July 1950, just two weeks into the war. On 9 December, he asked for commander’s discretion to use atomic weapons in Korea, and a few weeks later asked for 26 nuclear bombs.

It is sometimes thought that MacArthur was dismissed from his command to put a stop to his wild nuclear ideas. Bruce Cumings has established that the opposite is true: ‘Truman did not remove MacArthur simply because of his repeated insubordination, but because he wanted a reliable commander on the scene should Washington decide to use nuclear weapons.’

The use of nuclear weapons was actually authorised.

On 5 April 1951, the US joint chiefs of staff ordered atomic retaliation against Chinese bases in Manchuria if large numbers of new Chinese troops entered the fighting, or if Soviet bombers were launched from Manchuria against US forces.

On 6 April, Truman signed an order that atomic weapons should be used against Chinese and North Korean targets, and he approved the transfer of Mark IV nuclear warheads to military custody for use in Korea.

That same day, Truman held the first of a series of high-level meetings on dismissing MacArthur, which culminated in a public order replacing MacArthur on 11 April.

In the confusion surrounding MacArthur’s departure, Cumings writes, Truman’s order to use nuclear weapons was not sent. It was not implemented, Cumings believes, largely because the Chinese did not escalate the war.

There were several other occasions during the war when a nuclear attack was seriously considered.

Cumings also draws attention to ‘Operation Hudson Harbor’, which practiced a nuclear strike. In September and October 1951, in the midst of the Korean War, lone B-29 bombers were sent on simulated atomic bombing runs, flying from Okinawa to drop dummy atom bombs, or high explosives, on North Korea.

Cumings considers the psychological impact on the North Korean leadership as they observed the same bombers overhead that, six years earlier, had annihilated Hiroshima and Nagasaki.

These nuclear threats are remembered in North Korea, but they have to be forgotten here.

Milan Rai is the author of Tactical Trident: The Rifkind Doctrine and the Third World (1995).