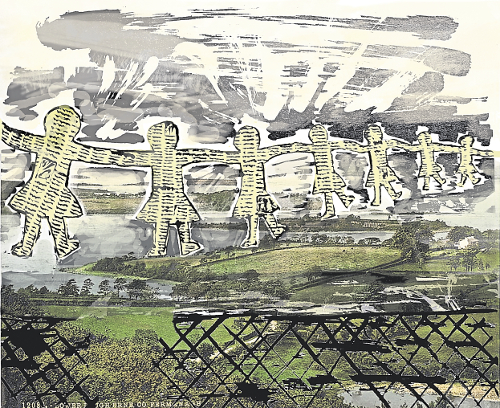 As PN goes to press, the British government is putting enormous pressure on the Republic of Ireland and on the European Union to weaken the Northern Ireland ‘backstop’. Peace News believes this pressure should be resisted, and the British peace movement should lend its weight to supporting the backstop.

Whether you are for leaving the EU or remaining, if you prioritise peace, you should reject the idea of a hard border in Ireland, and that means rejecting the idea of a time limit or any other weakening of the Northern Ireland backstop that has been agreed between the EU and the UK government.

It is difficult writing an editorial that may be out of date before this issue comes back from the printers, but at the moment Britain is completely obsessed with Brexit, and this is the peace issue currently at the core of the Brexit debate.

It seems unlikely that the UK will leave the European Union (EU) on schedule on 29 March, but it is still possible.

It seems highly unlikely that the Westminster parliament will pass the withdrawal agreement negotiated by the EU and prime minister Theresa May’s government (and which was rejected by a huge majority of MPs on 15 January), but it’s conceivable.

It seems almost impossible that a British government could reverse the decision to leave the EU (perhaps after another referendum), but it’s not quite impossible.

If the UK does leave the EU with a negotiated withdrawal agreement, most commentators agree that it will contain a ‘backstop’ or insurance policy related to Northern Ireland. Northern Ireland is a six-county area of Ireland which is part of the United Kingdom, but not part of Britain (England, Scotland and Wales).

Theresa May said on 17 January 2017, in her Lancaster House speech, that the UK would leave the EU’s single market (to stop free movement of EU citizens to the UK) and the EU customs union (to enable the UK to negotiate its own trade deals with other countries).

These red lines meant that goods and people going between Northern Ireland (outside the EU) and the Republic of Ireland (an EU member) would need to be checked at the border between Ireland and the UK. The EU needs to ensure that goods entering its territory meet EU quality and safety standards.

The EU pointed out in a negotiating position paper in September 2017: ‘The invisible border on the island of Ireland is one of the major achievements and societal benefits of the Peace Process. Border issues are broader than economic questions. The physical border itself was a symbol of division and conflict.’

It is likely that it will take many years to negotiate and ratify a new permanent trading relationship between the UK and the EU. The EU-Canada deal took five years to negotiate; ratification is not complete even though it was agreed in 2014.

The EU wanted to ensure that, during the long years of negotiation and ratification, there is no risk of a ‘hard’ border in Ireland with border posts and customs officials (backed up by the police and possibly the military). So the EU proposed that, until a new permanent relationship was agreed and in place, Northern Ireland should remain within the EU customs union and much of the EU single market, so that there could continue to be an invisible border in Ireland.

This special no-border in-the-EU status for Northern Ireland would only kick in after the end of a transitional period (December 2020, or later if the transition is extended).

If the new permanent relationship was somehow agreed before the end of the transition period, the insurance policy or Northern Ireland ‘backstop’ would never come into effect.

The Democratic Unionist party of Northern Ireland, on which May’s minority government depends, objected to the idea of there being different trade-related laws in the six counties than would be at work in Britain (and there being a customs border between Northern Ireland and the rest of the UK).

To satisfy those unionist objections, the EU and May’s government agreed at the end of 2018 that the backstop would apply to the whole of the UK, with both Britain and Northern Ireland remaining in the EU customs union during the backstop period (but special single market rules would still apply in Northern Ireland).

Pro-Brexit politicians have objected that the lack of a time limit on the backstop could leave Britain trapped in the EU customs union forever.

They have pressed for a time limit, or for the UK to be able to leave the backstop unilaterally.

These pressures should be resisted. They lead inevitably to the possibility of a hard border returning to divide Ireland, with all the risks of reinforcing divisive national identities and stirring military action.

The British peace movement should add its voice to oppose the idea of a border dividing Ireland, and to oppose any time limits or unilateral exit from the Northern Ireland backstop.