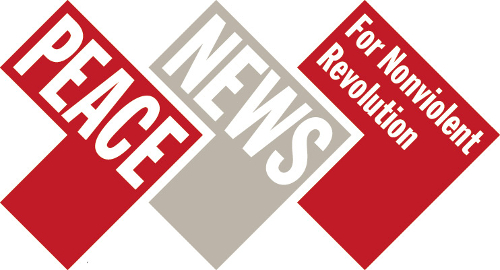 We need to break the huge visions that we have into smaller, winnable struggles, argues PN editor Milan Rai

There is a farmworkers union in Oregon in the US called Pineros y Campesinos Unidos del Noroeste (PCUN). The union campaigned for a year to get Kraemer Farms to be the first growers in the area to accept collective bargaining.

After that failed, PCUN got student groups to put pressure on NORPAC, which purchased vegetables from Kraemer Farms.

Gardenburger had an explicitly socially-conscious customer base. The company cracked within just a few months of campaigning. They agreed to stop buying from NORPAC unless Kraemer Farms allowed collective bargaining rights.

NORPAC could not give up Gardenburger’s business and got all the farms that it bought from (not just Kraemer) to accept collective bargaining.

Daniel Hunter, who tells this story in his wonderful book, Strategy and Soul, comments: ‘A major win, fueled by finding the right target.’

We had a fascinating conversation at the start of our first ‘How We Win’ workshop about ‘winning’.

The group of campaigners who had gathered in Hastings Arts Forum saw some downsides to talking about ‘winning social change’. If there are winners, ‘there must be losers’.

On the other hand, there were those who thought that ‘there are things clearly worth winning’.

One thing worth winning that was mentioned was ‘ending arms sales to Saudi Arabia’.

If we do win that struggle, there will be losers. The government of Saudi Arabia will lose some of its ability to attack Yemen. Some arms manufacturers in Britain will lose sales and profits – and some people working in those firms may lose their jobs.

Some of those workers might ask: ‘Why should our families suffer hardship so that a handful of troublemakers can feel morally superior?’

In this case, it’s clear that the most important thing is not how some British campaigners feel about themselves, but the lives of 14 million starving people in Yemen. It can’t be right for Britain to continue enabling the Saudi government to bomb those people, and to push the entire country towards catastrophe.

Half the people of Yemen might die this year.

Jobs can’t be justified if they are contributing to that.

At the same time, people have the right to provide for their families.

For a long time, PN has been arguing that building peace will mean a Just Transition which guarantees military workers well-paid jobs using their skills to make socially-useful products, and which involves military workers in planning how we get from where we are to where we need to go.

That’s an exact parallel to a climate Just Transition.

Part of the difficulty of figuring out ‘how we win’ for nonviolent revolutionaries, is campaigning for achievable victories in the next few years while also hanging onto a much bigger picture of social transformation.

If we want to build a new world where everyone can speak their minds, we need to embed free speech into our movements.

We can’t put freedom of expression off until tomorrow, it has to be part of the way we do things today. 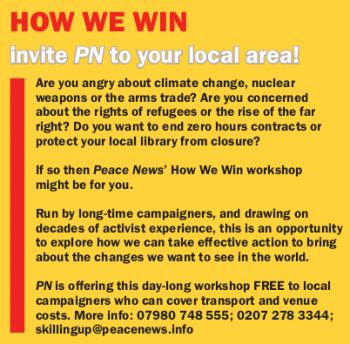 If we want to build a democratic society where workers make the big decisions about the work they do (‘worker’s self-government’) and where neighbourhoods are in charge of where they live (‘community control’), we can’t have social change organisations today where a few leaders dictate to everyone else, no matter how talented or dedicated they are.

We can’t have activist training – anti-oppression training, for example – that consists of the chosen few lecturing ordinary folk on the thoughts and feelings they should have or what they should say or how they should behave.

The direct education approach developed by Training for Change offers participants the opportunity to empower themselves. They get the chance to build on their own experiences and understanding to become more capable of winning social change.

That’s the kind of training that Peace News wants to be involved in, and the approach that we’re trying to follow in our ‘How We Win’ workshops.

One of the topics at our first workshop was ‘winnable goals’.

Going back to the PCUN/Gardenburger story, what was important there was finding the right ‘target’, the right decision-maker who could deliver the change that was needed. That’s a skill that a lot of us need to strengthen: finding demands that are achievable (if ambitious) and decision-makers who have the power to make them happen.

It’s no use to those who are suffering now, or who will suffer tomorrow, if we ignore the opportunities we have in front of us to win changes that are desperately needed.

We need to break the huge visions that we have into smaller, winnable struggles.

On climate change, one way that’s been done is through the divestment movement – which can be effective anywhere, not just near fossil fuel infrastructure.

Breaking things down into winnable campaigns seems to be the opposite of what national Extinction Rebellion has been about so far.