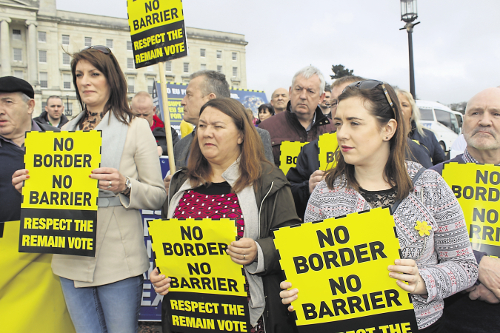 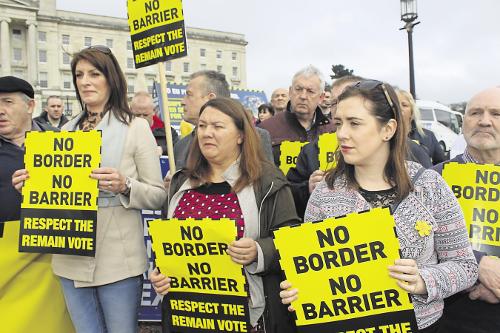 An October 2015 Sinn Féin protest at Stormont, outside Belfast, against a hard border in Ireland. Photo: Sinn Féin (CC BY 2.0)

‘Norn Iron’ is a colloquial, phonetic term for ‘Northern Ireland’ and there are certainly some ‘Norn Ironies’ about.

One is that the Democratic Unionist party (DUP) have done more for a united Ireland in the last couple of years than republicans have done in decades.

Another irony is just when more Catholics and even some Protestants have started thinking about a united Ireland, in mid-January, the New IRA should think it worthwhile to explode a car bomb and hijack vehicles in Derry (which is their stronghold).

Northern Ireland is not at war but it may be an exaggeration to say it is at peace. It has not had devolved government for two years and the British administration is reluctant to reintroduce direct rule, so there are bucket-loads of decisions not being made on all sorts of developments and support to people. Clausewitz’s dictum is stood on its head in Northern Ireland where currently politics can be the continuation of war by other means.

It is 100 years since the first Dáil (Irish parliament) met in Dublin, and the opening shots of the War of Independence against the British. At that stage the north of Ireland, and particularly Belfast, was an economic powerhouse with shipbuilding, engineering, linen and so on.

While today unemployment is low, Northern Ireland is nearer being an economic basket-case with low skills, low wages and considerable poverty, as well as a massive subvention (grant) from the British exchequer. All elements of business and farming supported Theresa May’s backstop, not worried about different treatment for Northern Ireland if it was economically advantageous. 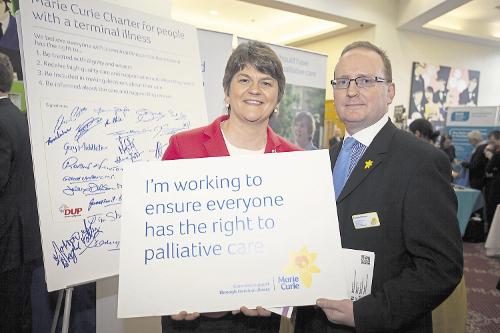 The DUP, however, have been insisting on identical treatment for Northern Ireland to Britain. This is also ironic not just because of differences in social legislation (for example, same sex marriage and abortion) but also since it was reverend Ian Paisley, founder of the DUP, who was partly responsible for an all-Ireland agricultural control area at a time of foot and mouth disease in cattle in Britain.

In relation to Brexit, unusually but because it suits them, the DUP choose the whole of the UK as the democratic unit (usually it is just Northern Ireland despite their Britishness).

The game of poker across the Irish Sea and English Channel will have its denouement soon. Perhaps there will be the softest of soft borders if the house of commons takes control of the process from Theresa May’s government.

A hard border on the island of Ireland would be highly inconvenient and a possible-to-probable disaster in the making – there will be checks required but how they take place would have to be determined.

Republicans who reject the peace process could take advantage of a hard border to again engage in attacks on British state personnel. But a hard Brexit could also accelerate the demographic trend to have a nationalist majority in Northern Ireland; there are far more children in Catholic schools in Northern Ireland than Protestant.

Increasing numbers of Catholics, who have been relatively content in Northern Ireland with equal treatment after the Good Friday Agreement, are considering or supporting a united Ireland, and even some Protestants too (though the latter is from a very small base).

The Good Friday Agreement of 1998 only requires 50 percent of those voting + 1 person to bring about a united Ireland. If this was done in an aggressive way, there would almost certainly be a violent response from loyalists in Northern Ireland who ‘haven’t gone away you know’ (Gerry Adams’ one-time comment on the then-continued existence of the IRA, now disarmed). However the nature of society south of the border, in the Republic, despite being conservative in economics (though generally without the ‘screw the poor’ ideology of some British Tories) has also changed very considerably.

While no one is too keen to ditch the Good Friday Agreement, it has not been very successful in introducing co-operative government to Northern Ireland.

It is always risky to speculate when unknown factors can throw spanners in anyone’s works, and whatever happens about Brexit, demographic change with increasing number of Catholic voters is likely to lead to a majority of people voting for a united Ireland within a couple of decades.

Whatever is to come about, it needs to happen through a process of discussion, analysis and goodwill. This could be a renewed system in Northern Ireland, still part of a United Kingdom (whatever that may mean in future) or some kind of united Ireland – and what that might mean needs to be analysed and defined so people have information to decide. In all of this, there is plenty of work for peace activists to do.

The Good Friday Agreement of 1998 set up new cross-border institutions, paved the way for a new kind of devolved government in Northern Ireland – and created a route to Irish unity.

The UK and the Republic of Ireland governments, and the major political parties in Northern Ireland (apart from the Democratic Unionists), all agreed that if more than half the people voting in a Northern Ireland referendum opted for re-unification, the island of Ireland would unite once more.

However, the British minister in charge of Northern Ireland was left with the sole power of deciding when to hold such a ‘border poll’.

She will hold the referendum ‘if at any time is appears likely to [her] that a majority of those voting would express a wish that Northern Ireland should cease to be part of the United Kingdom and form part of a united Ireland’.