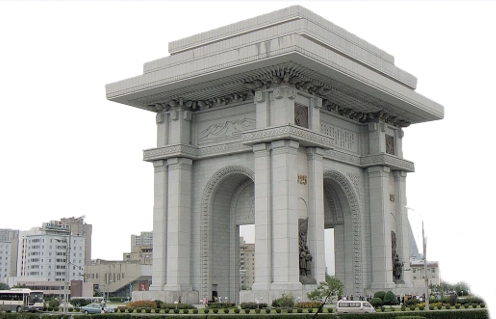 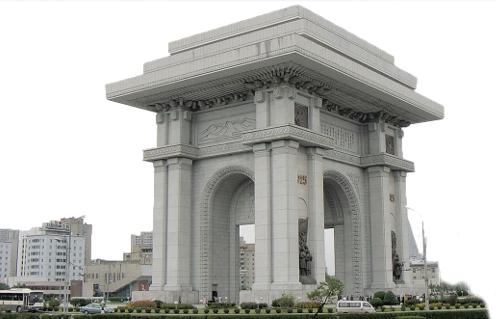 One of Kim Il Sung's many monumental birthday presents to himself, the Arch of Triumph was completed in 1982, for his 70th birthday. The structure commemorates the homecoming of Kim Il Sung after he ‘liberated Korea from Japan’. Photo: Kok Leng Yeo from Singapore (cc by 2.0) via Wikimedia Commons

Bruce Cumings: The US holds these [military] exercises every year, because South Korea, under [president] Park [Geun-hye]’s leadership, is a welcoming country for these war games involving, as you said, hundreds of thousands of troops. There aren’t many other countries in the world who are willing to do that. And the North, predictably, responds every time with missile tests or atomic bomb blasts.

In this case – and I want to emphasise that the North Koreans pay acute attention to what’s going on in Washington, and they try to do something that symbolises what they want from the US or to try and get attention. They did that when [Japanese] prime minister [Shinzo] Abe was having dinner with [US] president [Donald] Trump at Mar-a-Lago a few weeks ago. And they basically presented a missile right in the middle of the dinner. They tested a missile. Trump pulled out his 1990s flip phone to discuss it.

But what wasn’t pointed out in our media is that Abe is the grandson of Kishi Nobusuke, who was a war criminal, a Class A war criminal in World War II, according to the US occupation, and had been one of the people fighting against Kim Il Sung in Manchuria in the 1930s. He was responsible for munitions production. So you have Abe, who reveres his grandfather, and [North Korean leader] Kim Jong Un, who likewise reveres his grandfather, Kim Il Sung. And, basically, 70 or 80 years of history is represented by that particular missile test. But Americans think that’s a bunch of irrelevant minutiae. They don’t realise that Japan and North Korea have terrible relations, no diplomatic relations.

And basically, the North Koreans, at that dinner, wanted to present Trump with a message. The recent tests of four simultaneous missiles, of course, is a direct response to the hurried deployment of the [US] THAAD anti-missile system [to South Korea]. They’re just rolling it out right now so they can do it before a progressive president takes over in South Korea. By doing that, the North Koreans reveal that they have capabilities that were undetected before.

Amy Goodman: Well, professor Bruce Cumings, what about this? You have the Chinese officials issuing this warning. [China’s foreign minister Wang Yi said on 8 March: ‘The two sides are like two accelerating trains coming towards each other with neither side willing to give way. The question is: are the two sides really ready for a head-on collision?’] You have people in the United States deeply concerned that when you have a very unpopular president, and they’re embroiled in trouble at home, that he might want to focus attention on an enemy outside, and the idea that North Korea could become that country, a country that the US engages militarily. Do you think there’s any possibility of this?

“I’ve never heard a high Chinese official say that we’re moving toward a collision on the Korean Peninsula.”

Bruce Cumings: I actually don’t think the Trump administration can get its act together to appoint high people in the State Department, high officials in the State Department and the Pentagon. I don’t know how they can start a war in Korea or decapitate Kim Jong Un. I think the situation is actually worse, in the sense that over the last year or so there’s been a bipartisan, inside-the-Beltway [Washington establishment] consensus that most of our methods for dealing with North Korea – sanctions, cap on their tests, talking with them – those things have not worked over the years. [They are saying things like] ‘They’re still building their arsenal of nuclear weapons and missiles, and so some sort of force may be necessary, either to take out those missiles pre-emptively or to force an end to the Kim Jong Un regime.’

The Council on Foreign Relations last October published a paper on North Korea, where it came very close to saying the US might have to use force to change the regime in North Korea. So we’re not talking about Donald Trump and a bunch of yahoos; we’re talking about a consensus in Washington.

Also, Chinese foreign minister Wang Yi’s statement was very important, I think unprecedented. I’ve never heard a high Chinese official say that we’re moving toward a collision on the Korean Peninsula, that it’s like two trains rushing toward each other. Furthermore, over the weekend, William Perry, the former defence secretary and Bill Clinton’s roving ambassador for North Korea in the late ’90s, also said that he thought a train wreck was coming.

The simple way to handle this is the way Jimmy Carter did in 1994, when it looked like Bill Clinton was about to launch a pre-emptive attack on North Korea. And he just basically cut through all the bull in our relations with North Korea, going back decades, and flew to Pyongyang to talk to Kim Il Sung. And out of that came a complete freeze on North Korea’s plutonium facility for eight years. For eight years, they had no access to any bomb-making materials, 24/7 controls on that facility.

So, if Donald Trump wants to share a hamburger with Kim Jong Un, that’s a very good idea. But the idea of using force against North Korea, when even their artillery, 10,000 guns north of Seoul, conventional artillery, can take out a city that has a third of the South Korean population, you just really have no military option on the Korean Peninsula. But unfortunately, a lot of folks in Washington haven’t gotten that straight.

n Amy Goodman: I wanted to end by asking about this very strange situation of the killing of the half-brother of the North Korean leader. In Malaysia, police say a pair of women used the banned chemical nerve agent VX to assassinate Kim Jong Nam, the estranged half-brother of North Korea’s leader [on 13 February].

Bruce Cumings: It was very odd that this was done in a venue where there are all kinds of people milling around and security cameras there. When the North Koreans want to assassinate someone, they send a lone assassin, and he’s carrying poison so that if he is captured after the assassination, before he’s captured, he’ll commit suicide, and then they could deny everything and blame it on the South Korean special services.... It’s a very murky incident, and I don’t think we’ll ever get to the bottom of it, really, but we’ll probably learn a lot more than we know now.

Bruce Cumings is professor of history at the University of Chicago, and the author of several books on Korea, including Korea’s Place in the Sun (W. W. Norton, 2005). He was talking to Amy Goodman, the host of Democracy Now!, the daily radical US online radio/television news show:
www.democracynow.org