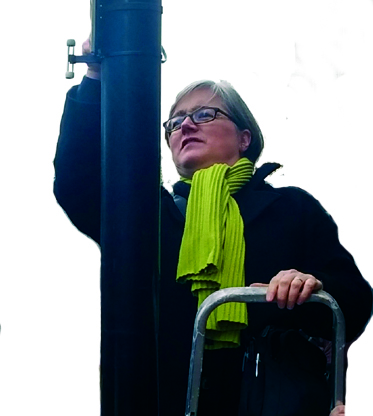 In 1972, the Staple Singers sang ‘Respect Yourself’, indicating that instead of (or as well as) complaining that ‘the president won’t stop air pollution’, we could, should, take personal responsibility.

It’s a song that always pops into my head whenever I read or hear the words ‘air pollution’. Of course, covering your mouth when you cough won’t lower the current high levels of nitrogen dioxide (NO2) but it’s a point well made. We cannot and should not just leave it to government, for unless we press them in huge numbers, government is not going to do much unless it is in their interest.

My local Green Party in Islington have been working on publicising air pollution. Although Islington has the second lowest average number of cars per household of all local authorities in London (around 58 percent with no car), we have a large amount of through traffic, with the A1 running right through the borough.

The first step is to understand where the pollution ‘hotspots’ are. Simple measuring devices called diffusion tubes are being installed by residents around the borough to measure nitrogen dioxide levels. The results are then publicised via local papers, schools and the council.

The task then is to fix them through, among other things: rerouting traffic; temporarily closing roads for so-called ‘Play Streets’, to protect children’s lungs; and properly enforcing the borough’s anti-idling policy so vehicles are not stationary with their engines running.

Over 28,000 people die from air pollution in the UK every year, according to government statistics. Air quality can affect unborn babies, growing children (think how close prams and buggies are to exhaust pipes!) and people with chronic illnesses.

Teachers have noticed an increase in the number of children needing inhalers. Studies have shown that air pollution can affect the efficacy of some drugs. We know air pollution is bad for us!

Much of the pollution in our cities is caused by individuals, particularly those in diesel vehicles.

So what is being done by government, national or local?

In February, the European Union issued the UK with a final warning to reduce nitrogen dioxide levels in 16 key areas including Greater London, Greater Manchester, the West Midlands and West Yorkshire
– or face the European courts. This has spurred some action around the country.

The mayor of London has made air quality one of his priorities. The £10 daily Emissions Surcharge (toxicity or ‘T-Charge’) for the oldest, most-polluting vehicles in central London will start in October this year.

The mayor will consult on introducing the central London ultra-low emissions zone in 2019, which will tighten the emission standards for diesel vehicles. The consultation will propose the zone is expanded to the north and south circulars, but campaigners will be demanding the zone includes all of Greater London. New cleaner buses will operate on the most polluted roads. There will be air quality audits at primary schools in areas exceeding legal limits of nitrogen dioxide (NO2), engaging with schools to identify the most effective local measures to lower emissions and exposure.

Other initiatives include issuing alerts during periods of high air pollution and investing in a ‘Healthy Streets’ programme.

The London mayor hinted that he will be introducing car-free days after seeing how Paris reduced the amount of traffic on bad days by banning cars with odd-number plates on one day, evens the next.

In January this year, a group of headteachers and school pupils visited the mayor of London to ask him to protect London’s children from air pollution.

Meanwhile, Birmingham city council is pushing on with work to establish what the introduction of a Clean Air Zone would mean for the city and how it can be implemented.

NB Some councils have little interest in upsetting the car lobby; in which case we recommend naming and shaming via local papers.