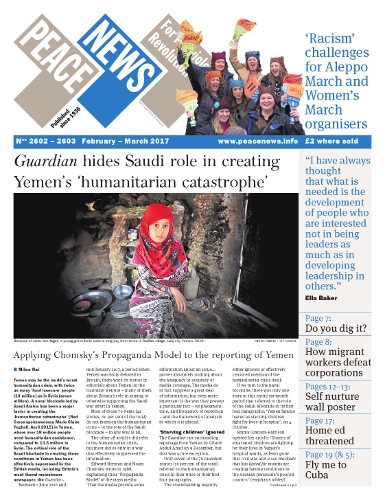 We can't rely on the mainstream media, so where should we turn? 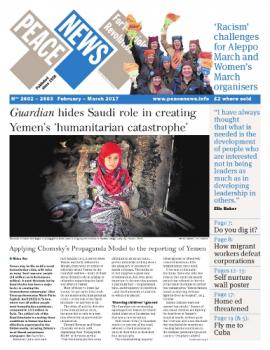 An appalling humanitarian crisis mounts today in Yemen where a naval blockade, ruthlessly imposed by the Saudi government, has led to mass poverty and famine. Saudi forces, backed by the US and UK, are bombing schools, hospitals, homes, farms and markets. Fleet Street and the broadcasting companies refer to it from time to time as the ‘forgotten war’. And yet it remains ‘forgotten’ simply because the mainstream media has chosen not to highlight in any consistent way the horrors being inflicted on Yemen. There is no frenzied, sustained, highly personalised demonisation of the leaders of Saudi Arabia – as applied in the past to dictators such as Saddam Hussein of Iraq, colonel Muammar Gaddafi of Libya, and Slobodan Miloševic of Serbia. Can you imagine the Sun carrying the headline: ‘Evil Saudi King Salman blamed for massacre of innocents in Yemen.’ Dream on.

According to Dr Florian Zollmann, lecturer in journalism at Newcastle University: ‘The humanitarian crisis in Yemen has received some attention in the British news media. Yet, this hardly compares with the intensity with which the news media has reported on humanitarian issues in other conflicts. A good way of analysing news coverage is to compare the humanitarian crisis in Yemen with relatively similar cases. It is striking that the news media paid far more attention to humanitarian crises caused by so-called “enemy” countries of the UK and US. Thus, humanitarian issues in the Kosovo (1999), Libya (2011), Crimea (2014) or Syria (2011-2017) conflicts received significantly more coverage in terms of indignation and portrayals of human suffering.’

Piers Robinson, professor of Politics, Society and Political Journalism at Sheffield University, comments: ‘Certainly, when it comes to the matter of foreign affairs, a large body of academic literature highlights the propensity of mainstream news media to follow in the wake of government policy. The tendency to defer to, and indeed support, government policy becomes even more intense in situations of war. Most major conflicts are accompanied by substantial propaganda campaigns which, over time, are designed to build and mobilise public support for war.’

Yet, historically, the alternative, non-corporate media has provided information, critical perspectives and entertainment to inspire activists – and this is happening today over the Yemen crisis.

According to professor Robinson: ‘In the context of mainstream media deference to governments, and the existence of extensive propaganda activities, it becomes imperative to seek out alternative information. Many sites exist, for example, 21st Century Wire and the Corbett Report, run by James Corbett from his base in Japan since 2007.’

Dr Zollmann argues that independent journalists such as Gareth Porter, Ian Sinclair and Mahdi Darius Nazemroaya have provided important perspectives on the conflict in Yemen. ‘A broad range of commentary and analysis on Yemen can be found on online web-portals such as Truthout, IRIN, Consortiumnews, Information Clearinghouse, openDemocracy, teleSUR and Democracy Now!’

Some of the best coverage of Yemen has appeared regularly on the website of Middle East Eye. For instance, Dan Glazebrook contributed a insightful and detailed analysis in ‘The UK’s century-long war against Yemen’. Too often, coverage in the corporate media lacks appropriate historical context. Here Glazebrook looks back over almost a century of Yemen’s troubled history. This includes Britain’s secret ‘dirty war’ in Yemen between 1962 and 1969 which ‘spanned both Conservative and Labour governments, and implicated leading members of the British government in war crimes’.

Glazebrook concludes: ‘A peaceful, united Yemen would threaten Saudi-British-US hegemony of the entire region. That is why Britain has, for more than 80 years, sought to keep it divided and warring.’

The progressive, anti-war movement is, at root, internationalist and the internet today provides access to a vast range of foreign-based websites that have kept a close watch on developments in Yemen. For instance, there’s the US-based TomDispatch.com (run by the historian Tom Engelhardt), the World Socialist Website and Newsbud.com, run by the CIA whistleblower Sibel Edmonds.

The Washington-based news website CounterPunch (edited by Jeffrey St Clair) has carried regular critical analyses of US/UK foreign policy since it was launched in 1993. Martha Mundy, for instance, in an analysis of the Yemen conflict, highlighted this often ignored aspect of crisis: ‘The French, who are facilitating the naval blockade, still have a base in Djibouti. It allows them to continue as players in a global network (Diego Garcia and 1,400 US overseas bases) expanded from the days of the Cold War. Today, Djibouti’s major function may be not above, but under, water: to watch the communication cables, which pass between China, Asia and the West, that lie on the sea bed. Although all that visitors to Djibouti may see are French army frogmen diving to check the cables, there must be wider coordination with the Israeli submarines patrolling in the Red Sea.’ (‘Yemen as Laboratory: Why is the West So Silent About This Savage War?’)

In France, le Monde Diplomatique has an invaluable English edition. In Australia, Green Left Weekly and newmatilda.com keep a close, progressive eye on Yemen, while in India, Frontline provides regular analyses of US/UK foreign policy strategies. In Germany, Deutsche Welle (in English translation) has carried some detailed investigations of the Yemen crisis (for instance, ‘Yemen conflict all but ignored by the West’).

Some argue that the alternative media are ineffective since they preach largely to the converted and are too overtly biased. Others, in contrast, see the non-corporate media as crucial, inspirational elements of progressive campaigns worldwide. And as professor Robinson comments: ‘Some alternative sites are more reliable than others, but the same goes for mainstream media. The readers and viewers need to use their own critical judgement in sorting the wheat from the chaff. A demanding job, of course, but a necessary one.’
-----------------------------------

Other angles on Yemen

On many of these independent media sites (mentioned in the main article), you can search for ‘Yemen’ and see their coverage of the conflict:

Richard Lance Keeble is professor of Journalism at the University of Lincoln and visiting professor at Liverpool Hope University. His Covering Conflict: The Making and Unmaking of New Militarism (on Fleet Street’s coverage of wars since 1945) is to be published by Abramis, of Bury St Edmunds, later this year.