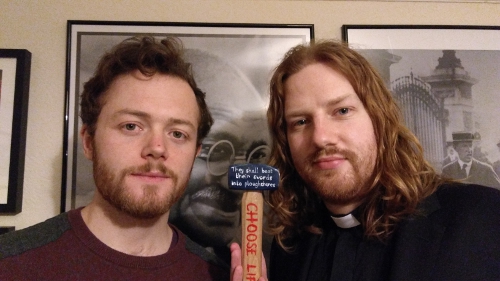 On 29 January, a Methodist minister and a Quaker activist entered BAE Systems’ Warton site in order to disarm warplanes bound for Saudi Arabia.

This is a statement carried by the pair when they were arrested inside BAE Warton on 29 January.

Today we intend to enter BAE Warton, to locate warplanes bound for Saudi Arabia, and disarm them. We take this action in order to prevent the export of weaponry that will almost certainly be used in war crimes.

This day in 1996, three women entered the same site to disarm a plane being sent to Indonesia to be used in the genocide in East Timor. It is symbolic that we take action on this day to mirror the rightness of their action, which a jury found to be lawful.

Eurofighter Typhoons and Tornadoes sold to Saudi Arabia are being used on combat missions in Yemen. BAE also supplies Saudi Arabia with Hawk jets, used to train the Royal Saudi Air Force, which will almost certainly have been used in Yemen in their ground attack capacity. Typhoons and Hawk jets are known to be on site being prepared for imminent delivery to Saudi Arabia, and we have seen Saudi Tornadoes there ourselves.

By stopping or even delaying Saudi Arabia having more planes with which to bomb Yemen, this action will save innocent lives and prevent war crimes. Our action is therefore necessary to prevent a greater crime. We are clear that the real crime taking place is arming despots, who frequently use arms on their own people, are known to use torture and the death penalty, and who will be using the planes sent from BAE Warton to continue to commit crimes against humanity.

Even if we do not manage to disarm a plane bound for Saudi Arabia, we hope that by openly trying to do so we will endanger future arms deals. The Saudi rulers are notoriously touchy about criticism – they don’t tolerate it at all in their country. Furthermore, they are not just buying arms – they are also buying legitimacy. That is why whenever we want to seal a big deal senior royals and government ministers must fly out and persuade them to buy weaponry.

We need to do everything we can to show these sales are illegitimate and stop the government pushing for more sales. We hope that by shining a light on British complicity in Saudi war crimes we will contribute to ending arms deals with this regime. Therefore even if we do not manage our primary aim of stopping or delaying a plane being used in war crimes through physically rendering it incapable of doing so, this action will still less directly in the future prevent war crimes by stopping weapons being sold to those that perpetrate them.

This action has been planned over many months. We do not take these steps lightly, but we have no other option. We have been active in opposing the arms trade to Saudi Arabia for years, and in the face of wilful government denial that there is a problem with arming Saudi, including willingness to suspend our own due process of law, and complete unwillingness to consider stopping arming Saudi Arabia, we must take this action.

It is absolutely beyond a shadow of a doubt that BAE’s Typhoons and Tornadoes are being used by Saudi Arabia in their war in Yemen, where, again beyond a shadow of a doubt, they are committing war crimes – 78 percent of deaths in Yemen are civilians, 69 percent of civilian deaths and injuries were caused by air-launched weapons, over 99 percent of civilian deaths and injuries from airstrikes were by those perpetrated by the Saudi-led coalition. That means 53 percent of those people killed in Yemen are civilians killed by Saudi airstrikes – a war crime.

A legal analysis from Matrix Chambers found that the UK government is breaking international, EU and UK law by supplying arms to Saudi Arabia in the context of its military intervention and bombing campaign in Yemen. In June 2016, a Judicial Review of the government’s decision to keep selling arms was granted and will be heard in February. In October 2016, two Parliamentary Committees said, ‘Given the evidence we have heard and the volume of UK manufactured arms exported to Saudi Arabia, it seems inevitable that any violations of international humanitarian and human rights law by the coalition have involved arms supplied from the UK. This constitutes a breach of our own export licensing criteria.’

We probably won’t even make it to a plane bound for Saudi; we will probably get caught and either thrown off the base or arrested, but we have to try. We will carry out this action in the safest way possible and, if we are spotted, we will comply with reasonable requests from BAE personnel and not resist arrest.

We intend this action to be accountable, just as we believe selling weapons to be used in war crimes must be. Therefore, if we are not spotted we will alert the authorities, rather than attempt to ‘get away with it’. We fully expect to be arrested and are prepared to spend time in prison if need be. It is for the sake of accountability that we have written this statement in advance and will carry it with us on the action.

On their release, Daniel Woodhouse and Sam Walton said:

BAE security found us just metres from war planes bound for Saudi Arabia. We’re gutted that we couldn’t disarm a plane and stop it being used to carry out airstrikes in Yemen. We could have saved lives by preventing Saudi war crimes in Yemen.

The UK government has blood on its hands and we need to do everything we can to stop the transfer of weapons and show these sales are illegitimate. By providing weapons and support Britain is deeply complicit in Saudi war crimes, and it’s vital that we bring an end to this immoral, abhorrent trade.