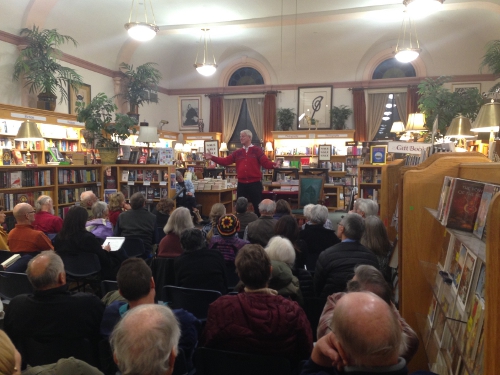 Americans tend to be self-obsessed. That condition goes with being in the centre of a world empire, as British people with long memories may recall. How, then, can people inside an empire get enough of a broader perspective to be able to think well?

‘This guy is fucking relentlessly on point,’ one journalist tweeted in the midst of an author event I led in Colorado. The bookstore was filled and I’d used humour and anecdotes to warm up the crowd. And, yes, I responded to their questions about our political crisis by relentlessly returning to the broader perspective offered by the experience of other countries – Denmark, Sweden, Norway, and Iceland.

It worked, as it does over and over. People come to the bookstore with furrowed brows and leave with positive energy.

I acknowledge the large differences between those countries and the US, and point out nevertheless that the Nordics all looked like hopeless cases a century ago under the thumb of their economic elites, small countries at the mercy of huge global market forces. (Globalisation has always been a fact of life for the Nordics.) In some ways they had far less to work with than do Americans.

The Nordics once had enormous income gaps; they closed those gaps significantly, virtually abolishing absolute poverty. Those same countries are the ‘best place to be a mom’ and ‘best place to be an elder’. They have more press freedom and more individual freedom than Americans do. They have far less corruption, and fierce controls on their banks. In Norway, the controlling ownership of the major corporations is held by the public, on a national or regional level.

Once dominated by their economic elites, they now have democracy. (The US has just been downgraded by the Democracy Index to a ‘flawed democracy’.) The Nordics are racing ahead on measures to meet the climate crisis, which is a value Americans also hold but, lacking democracy, cannot achieve.

In the eight months of my book touring, I’ve criss-crossed the US – from Arizona to New Hampshire, California to Maryland, North Dakota to Vermont, Colorado to Delaware, and Maryland to Alaska.

Everywhere I’ve found anxiety from the dramatic signs of polarisation, and everyone I meet is surprised to hear that the Swedes and Norwegians used the period of their greatest polarisation in modern times to engineer their greatest breakthroughs!

In the 1920s and ‘30s those countries had fascists on the march and communists organising for a proletarian revolution. Troops were called out to attempt to maintain order. After the Swedish army killed unarmed strikers, workers and allies across Sweden conducted a general strike that overthrew the economic elite and opened the political space needed to invent what economists call ‘the Nordic model’.

“The Nordics all looked like hopeless cases a century ago, under the thumb of their economic elites, small countries at the mercy of huge global market forces”

Norwegians, encouraged, escalated their nonviolent struggle and by 1936 had made their country ungovernable by the economic elite. The majority forced the economic elite out of dominance, then tried to catch up with the Swedes. After the interruption of Nazi German occupation, the Norwegians caught up and, with a more leftist orientation, arguably surpassed Sweden in the thoroughness of its socialist policies.

Americans are amazed to hear that story, believing that polarisation is a time to seek the nearest foxhole and hope that an age of reason will somehow return. Once they see history through the lens of the Nordic experience, I invite them to take a fresh look at America’s own 20th-century experience. They discover that the periods of greatest polarisation – the 1930s and ‘60s – saw Americans take the greatest leaps forward toward justice.

In the US as in the UK, I’ve heard tension between those who organise nonviolent struggle campaigns and those who seek to build sustainable institutions for the future, like Transition Towns. Because ‘Viking economics’ is somewhat mysterious compared with ‘neoliberal’ or ‘socialist’ economics, people come to the bookstore events with a range of viewpoints.

Again, looking outside ourselves can be helpful. In Sweden and Denmark, followed by Iceland and Norway, people built a very strong infrastructure of co-operatives – for producers, for consumers, even for banking and insurance.

At the same time, people were waging nonviolent campaigns for fair wages, workplace protections, just agricultural policies, and the overthrow of the dominance of the economic elite.

These two broad strategies actually worked together, although often led by different sets of people. Those building new institutions developed organisational skills and expertise that paid off for the democracy of the future, and also reassured the nervous middle-class people on the fence in those divided societies that productivity and functionality would be values cherished in the new society.

What Gandhi might call the ‘constructive programme’ also instilled confidence. It is no small thing to challenge capitalism and invent an alternative economic model! It is bold, even daring, for ordinary people to say that those who have led economies for decades or centuries are wrong, and entire nations should convert to economic structures that made different assumptions about human nature.

A small army of co-operators grew in confidence that they could do things as well or better than the capitalists could. They also, in the throes of the Great Depression, helped poor workers and farmers retain some wealth, just as was done post-2008 when cooperative institutions did a better job of weathering the Great Recession.

I come away from researching the Nordic experience with the view that it’s time for activists in the US to embrace both strategies and, even while maintaining a division of labor as appropriate, claim each others’ victories as our own.

After I shared Viking Economics at Norway House in Minneapolis in Minnesota, the director told me it was among the best author events they’d had. I use the format of question-and-answer rather than lecture, and people had great questions.

‘Since Norway is such a booster of the United Nations, why doesn’t it join the European Union?’ ‘How can little Norway handle all that oil without badly distorting its economy?’ ‘How are people coping with immigration?’

I address those questions in the book, but I’m happy to do so in person because each question leads to another.

Some of questions reveal stories that people have made up. ‘What is it about Norwegian culture that delivered such a free and democratic and prosperous nation?’ I patiently explain that a century ago Norway had its culture but the people were hardly free and had little democracy. There was so much poverty that for decades masses of Norwegians fled their country.

A century ago, the traditional strengths of Norwegian culture were suppressed, because the political economy was set up for widespread poverty, a huge income gap, and rule by an economic elite that has scant regard for the cultures of working-class communities – or community at all.

We might ask if that same dynamic operates now in the UK, Europe and the US, sparking a nationalist revolt among people shrugged aside by the economic elite and condescended to by the cosmopolitans.

‘How did the Nordics persuade their parliaments to change the system?’ The made-up story behind this question is that Norway, for example, changed through a rational process of persuasion. I explain the actual history, in which brave Norwegians – working people, family farmers, and their middle-class allies – forced a change through nonviolent, disruptive force. The struggle came to a head in 1936 when the economic elite was forced to give up its dominance.

A key to their success was that the Norwegian Labour Party was held strictly accountable to the union movement itself. Parliamentarians, on their own, seem not to be trustworthy.

In Norwegian history, it was the people’s movement that was the dog, and the parliamentary party the tail. Movement leadership believed that a power shift needed to be forced by nonviolent direct action, rather than by elections and parliamentary manoeuvre. Once the power shift is done, then the new economic model can be implemented.

The main reason I wrote Viking Economics was to persuade people of the importance of vision in making significant change. No one has ever protested their way into a new society.

What builds and sustains mass movements despite repression is knowing they are fighting for what they actually want – not fighting against what they don’t want. What they want, articulated with clear institutional features and policies, is a vision.

The vision-averse American majority, having lost so much ground over the years, can only hope to make major change by adopting a vision. Polls indicate that the Nordic economic model could achieve a rough consensus among the majority. I wanted both self-identified activists and concerned non-activists to learn about that model.

Half a month after the release of my book, the Movement for Black Lives released a vision of their own, whose economic features were in alignment with what the Nordics have learned are both just and practical.

Even while most activists and concerned non-activists alike leave the bookstores with renewed energy, a few attenders are unhappy. I invite their challenges during the author events, and they point to flaws in the four countries I studied as reason to disregard the Nordic model.

‘Norway is still extracting oil and gas, and now even in the Arctic!’ ‘Sweden is a major arms exporter!’ ‘Denmark’s government is unwelcoming to immigrants!’ ‘Iceland hasn’t yet amended its outmoded and undemocratic constitution!’

Everyone I interviewed in those countries acknowledged flaws, pointing out to me indications of racism and other problems. Norwegians tell me they are ‘a nation of complainers’. My book accordingly reports ways in which those countries are still struggling, still far from utopia.

This leaves an activist with a strategic dilemma. ‘Do I believe it’s possible to mobilise a majority of my population to fight for a utopian vision that has no practical track record or evidence of functionality? If not, am I willing to build majority coalitions to fight for a system that has a far better track record than what we have been living with, knowing that in order to get it we will have to defeat the economic elite, a power shift that will then enable us not only to implement the Nordic model but also enjoy a democracy that enables us to make more radical gains toward a new society?’

This is an easier choice in the US, where we stand far below the UK on most international measures of well-being, and where we face a shrewd economic elite that has, according to billionaire Warren Buffett, been winning the class struggle for decades.

In my book, however, when I report the international ratings I find the UK usually far below the Nordics, about midway between the Nordics and the US. Perhaps it is not all that easy to make major macro-level change in the UK, either. The unity that’s needed may require the vision that supported victory for the Scandinavians.

George Lakey recently retired from Swarthmore College where he was Eugene M Lang visiting professor for issues in social change. Viking Economics is his ninth book. He is also the author of Toward a living revolution: A five-stage framework for creating radical social change (Peace News Press, 2012).
George Lakey, Viking Economics: How the Scandinavians got it right and how we can, too, Melville House Publishing, Brooklyn and London, 2016, £13.99.

The Democracy Index is published by the Economist Intelligence Unit: www.tinyurl.com/peacenews2252