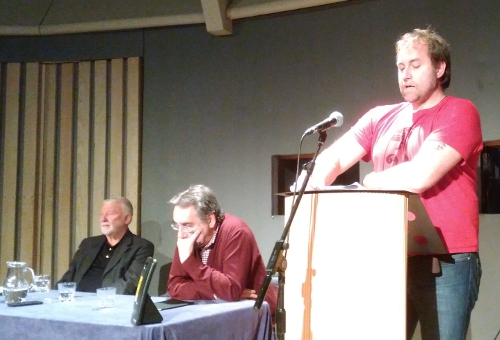 On 22 October, Aberystwyth Arts Centre hosted an event by Ceredigion Stop the War to explore the meaning of imperialism 15 years after the attack on the World Trade Centre. The title ‘War is Peace’ was picked from George Orwell’s novel 1984.

Booth described the root of war as ‘violent clashes of interests beyond diplomacy’, noting ‘many wars do not happen because people disagree on the way they see the situation’, rather ‘they agree completely, both parties want the same thing – but for themselves and not for the other!’ He then focused on language, noting how war is justified by heavy use of words like ‘national interest’, ‘nation state’ and ‘democracy’ and words like ‘evil’ to describe the ‘enemy’.

Booth views ‘evil’ as a lazy, sensationalist word, used in place of nuanced analysis with accurate words describing a situation. In 1984, Orwell wrote: ‘But if thought corrupts language, language can also corrupt thought.’

In response to calls for military action in Syria, Booth advocated less military and more diplomatic action and quietly noted that ‘sometimes the best we can do is to help alleviate suffering and apply humanitarian help’. Not exactly optimistic, Booth saw hope in a developing sense of a global ‘we’ among groups and argued: ‘let’s not heed Theresa May’s saying “a citizen of the world is a citizen of nowhere” but act as citizens of the world, asserting our basic humanity.’

John Rees reflected on living in a competitive system with a competitive arms industry, favouring engagement in actions of war rather than diplomacy. Conflicts from smaller countries increasingly escalate to larger countries as can be seen in Syria with risks of conflict between the US and Russia, both wanting access to a friendly base in the area.

As for future military engagement by the US, Rees believed that Hillary Clinton’s consistently hawkish record pointed towards escalation of intervention in the Middle East and Eastern Europe, while Trump (now president-elect) ‘is totally unpredictable on these questions!’ With ‘important sections of the US ruling class calling for more, not less, military action by the armed forces’, Trump was unlikely to continue down the road of isolationism.

Rees, like Booth, was not overly optimistic about a peaceful world, but believed international public opinion, the ‘third big global power’, was immensely influential in sheer numbers of those involved. A lifelong activist, he described the dilemma that we all face: ‘when I get up in the morning, do I engage or do I ignore?’ and concluded ‘if you fight against war, you may not win, but if you don’t, you certainly won’t!’