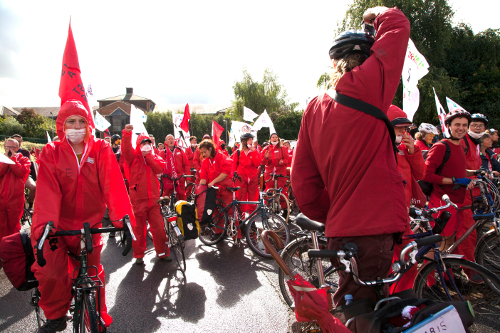 A Reclaim the Power climate action Critical Mass bike ride around Heathrow on 1 October. Inside the airport, over 100 protesters staged a die-in, with testimonies from Global South communities affected by climate change. Photo: Reclaim the Power

01 Dec 2016 News by Gabriel Carlyle
A Reclaim the Power climate action Critical Mass bike ride around Heathrow on 1 October involved over 100 cyclists, slowing traffic in and out of the airport. Inside the airport, over 100 protesters staged a flash mob die-in, with testimonies from Global South communities affected by climate change. The bike block visited Harmondsworth detention centre to link climate change, drought and mass migration. The actions were part of an international day of action, with events in Turkey and elsewhere. Photo: Reclaim the Power

The election of a climate denier to the US presidency leaves humanity ‘facing the most important question in its history’, according to renowned US dissident Noam Chomsky. Namely, ‘whether organised human life will survive in anything like the form we know’.

Some thin slivers of hope exist.

The threat of a Trump presidency helped to galvanise over 100 countries to speed up the ratification of the December 2015 Paris agreement on climate change. It entered into force just days before his election. (It took over seven years for the Kyoto Protocol to come into force.)

International resistance – led by indigenous peoples and the Global South – is also building. Bangladesh, Ethiopia, the Philippines and 45 other climate-vulnerable nations promised in November to become zero-carbon societies by 2050. This was the strongest commitment to come out of the COP22 UN climate summit in Morocco.

In the developed world, the divestment movement continues to pressure institutions to ditch their investments in oil, coal and gas – as a way of breaking the hold of the fossil fuel industries over the political process.

On the other hand, global temperatures are set to rise by 5.9° C above pre-industrial temperatures by 2100 if we continue with ‘business as usual’. That was the conclusion of research published in Science Advances in November. This estimate was based on analysis of 784,000 years of climate data.

The night comes on

This is a rise in temperatures so rapid and so extreme that it would probably terminate human civilisation as we know it.

Yet, Chomsky notes, the 8 November US elections placed ‘total control’ of the world’s only superpower in the hands of a political party dedicated to ‘accelerating the race to disaster’. President-elect Donald Trump has already called ‘for rapid increase in use of fossil fuels, including coal; dismantling of regulations; rejection of help to developing countries that are seeking to move to sustainable energy; and in general, racing to the cliff as fast as possible.’

According to a second report in November, ‘the period 2011–2015 was the warmest five-year period on record, consistent with established long-term warming trends due to rising levels of greenhouse gases’. The world meteorological organisation (WMO) expects 2016 to be the hottest year on record. If so, 16 of the 17 hottest years ever recorded will have been in this century.

According to the WMO, many of the extreme weather and climate events recorded during 2011–2015 ‘had their likelihood of occurring substantially enhanced by human-induced climate change.’ This includes the East African drought and famine in 2011–2012 that claimed over 250,000 lives, and ‘Superstorm’ Sandy, which caused $67bn of damage in the US in 2012.

The stakes are as big as they can be, and it’s going to be one hell of a struggle. But it’s not over yet.

A Reclaim the Power climate action Critical Mass bike ride around Heathrow on 1 October. Inside the airport, over 100 protesters staged a die-in, with testimonies from Global South communities affected by climate change. Photo: Reclaim the Power