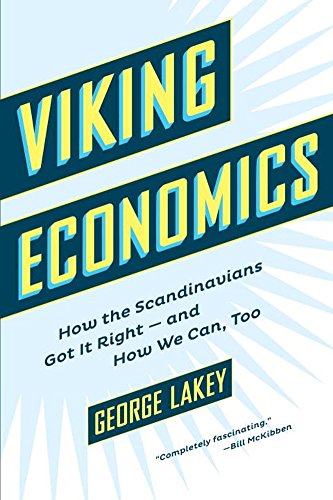 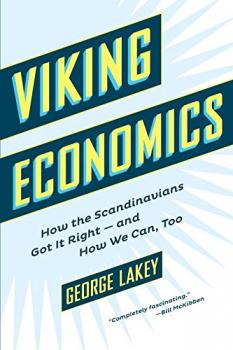 According to Lakey, the economies of the descendants of the Vikings ‘have a sixty-year track record of delivering increased freedom and equality’ – a political reality he believes is within reaching distance for the US. A visiting professor for Issues of Social Change at Swarthmore College in the United States and Peace News regular, Lakey bases his thesis on a wealth of academic studies, interviews with experts and personal experience – he married a Norwegian, lived in Norway for a year in 1959 and has returned many times since.

Viking Economics is essential reading, providing ideas and inspiration for how the UK Left can maximise its power, moving forward to kick out the emboldened Tory government, boost Jeremy Corbyn’s electoral chances and win a progressive ‘People’s Brexit’.

At the turn of the twentieth century the Nordic countries had very high levels of inequality and poverty, with many people emigrating to the US and elsewhere. However, as Lakey notes above, today the Nordic countries have been transformed, consistently topping international measures for human development and well-being. Focusing on Norway but also covering Denmark, Sweden and Iceland, Lakey highlights how the relatively high-tax ‘Nordics’ have achieved close to full, largely well-paid employment, universal healthcare, free higher education, a healthy work/life balance, and generous welfare states, while significantly reducing poverty and building modern and efficient infrastructure.

Lakey does a good job of highlighting how this differs from the neoliberal, business-friendly US and UK, citing Kate Pickett and Richard Wilkinson’s seminal work The Spirit Level: Why More Equal Societies Almost Always Do Better to explain how high inequality has a detrimental effect on a range of social factors, from trust among the population to levels of crime.

How the Norwegians and other Nordics achieved all this comprises the heart of the book, with Lakey telling a fascinating history of struggle that is largely unknown to progressive activists in the UK.

Following the fight to gain union recognition in the 1880s, the infant union movement set up its own party, the Norwegian Labour Party, and national trade union. Influenced by the advanced labour movements in the US, a vibrant leftist political culture emerged, with supportive middle-class intellectuals setting up Mot Dag in 1921, arguably the most influential periodical in Scandinavia at the time. After the Great Crash of 1929, strike activity – including a general strike – significantly increased despite harsh repression from the government and employers, with the defence minister Vidkun Quisling sending in the army to quell a strike in the town of Skien. During this period, labour increased its representation in parliament until it eventually became the dominant party. ‘Norwegians created a small, visionary social movement that grew, engaged in struggle, attracted allies, and won’, Lakey summarises. Victory led to a fundamental power shift in the country, forcing a political settlement that led to the ‘Nordic Model’ being established in the 1930s.

More recently, noting how the defeat of organised labour during the Miners’ Strike in 1980s Britain allowed Thatcherism to run rampant, Lakey compares it to the industrial struggle that occurred at the same time in Denmark. With a centre-right government seeking to impose austerity measures, the Danish unions went on the offensive, pushing for a pay increase, shorter working week and more taxes on corporations. When the government tried to impose its will and ban strike action, workers gathered outside parliament and wildcat strikes erupted around the country. The government was forced to compromise, and their neoliberal agenda was largely shelved.

In short, it was union-led, nonviolent struggle that led to the transformation of Norway and the other Nordics. And, importantly, with electoral channels often blocked, it was extra-parliamentary direct action that was the initial engine of change. Furthermore, Lakey is keen to highlight the fact that the social democratic consensus that has largely held firm in Nordic politics for decades is itself the product of ‘harsh polarisation and open struggle’ in the first half of the twentieth century. Only later, he notes, ‘did most Norwegians who resisted change realise that the change actually was a big improvement on the bad old days’. 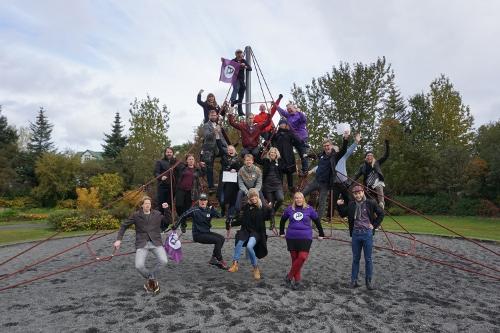 At the end of October, as one effect of the grassroots uprising in Iceland since the financial crisis, the Icelandic radical Pirate Party tripled its vote and its representation in parliament (the ‘Althing’) gaining 10 seats. Also, Iceland now has almost as many female as male MPs (48 percent to 52 percent), the highest female representation in an elected national parliament anywhere, ever. The Pirates won fewer seats than some observers had expected earlier in the year, but as PN went to press, it looked like the party might take seats in government. The party’s candidates in the general election are shown here in an official photo. The Pirates believe in direct democracy and online democracy, privacy for the individual and transparency for the powerful. Photo: Pirate Party

Using an accessible Q&A format, in the final section Lakey addresses questions and criticisms about applying the Nordic Model to the US. It’s directed at people in the US but, like his thesis on what lies behind Norway’s political transformation, his answers and strategising generalise to the UK and our contemporary political strife.

He believes activists need to remember their own nation’s long history of people-powered change – from the civil rights movement to social security, LGBT rights and beyond. Moreover, he maintains it is important for movements to remember the well-known adage ‘The best defence is a good offence’.

For example, he criticises the post-financial-crash campaigns in the US for trying to protect previous gains instead of going on the offensive as people in the US did after the 1929 crash. With the US oligarchic electoral system rigged against progressive change, Lakey argues that people taking to the streets in large numbers could create the political space for real change, pointing to how people-power brought Iceland back from the brink after its 2008 crash. Finally he argues for the importance of a strong vision for a new society, ‘to project the contours of what a political economy could look like’ – of which his book is the perfect example.

Accessible and hopeful, Viking Economics is essential reading, providing ideas and inspiration for how the UK Left can maximise its power, moving forward to kick out the emboldened Tory government, boost Jeremy Corbyn’s electoral chances and win a progressive ‘People’s Brexit’. ‘Change requires hard work’, Lakey notes at the end. Or as the freed slave Frederick Douglass once said ‘Power concedes nothing without a demand. It never did and it never will.’