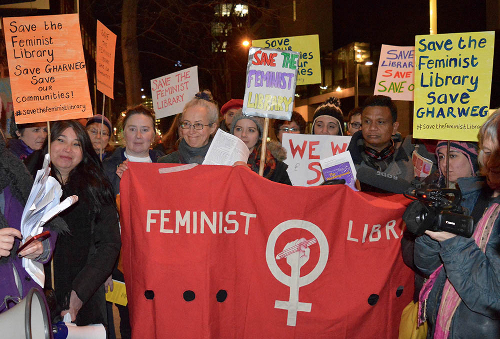 Celebrating a powerhouse of women’s archiving and activism since 1975 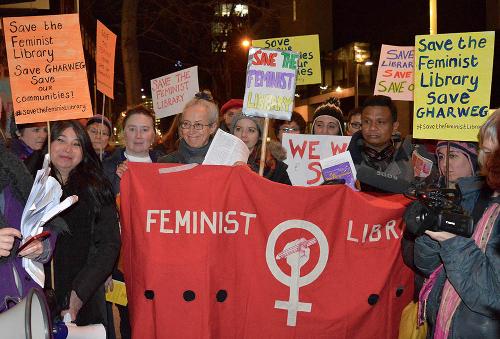 150 people gathered for a ‘read-in’ of feminist books outside Southwark council budget-setting meeting on 24 February to support the Feminist Library, threatened by eviction. (GHARWEG, a threatened tenant in the same building, was originally for refugees from Ghana, but in 1997 became an Advice, Training & Careers Centre for all black and minority communities.) PHOTO: FEMINIST LIBRARY

Faced with unsustainable rent increases at the end of 2015, and the threat of eviction on 1 March 2016, London’s Feminist Library launched a wide-ranging campaign which immediately won international support, positive media coverage and 16,000 signatures on our ‘Save the library’ petition. We also held a successful ‘read-in’ protest outside a Southwark council’s budget meeting (see above).

After months of negotiation, we are pleased to say that we have reached an agreement with Southwark council to let us stay in our current home in Westminster Bridge Road, near Waterloo station, until we move into new premises, we hope in spring 2017.

Although we have found a new home, our fight is far from over. We still need to fundraise: to afford the higher rent at OKRS (Old Kent Road Studios), to make our units ready, and provide new shelving and other equipment.

Originally known as the Women’s Research and Resources Centre, the Feminist Library was set up in 1975, during the height of feminism’s second wave, by a group of women determined to record and document the Women’s Liberation Movement and safeguard its history.

There was a political imperative to provide a space for women to organise, agitate, network and share ideas in a clearly feminist space. The library became a contact point for women locally, nationally and internationally. That political imperative remains to this day. Despite the dominant media message that there is no need for autonomous, intersectional feminist space, we know differently. Although feminism has achieved much, there is still much to fight for.

The Feminist Library’s collection is recognised as one of the most significant collections of contemporary feminist material in England. Dating from the late 1960s onwards, our collection contains over 7,000 books, 1,500 periodical titles from around the world, pamphlets, papers, posters and ephemera, and a small but important collection of archives of the second wave Women’s Liberation Movement.

The collection includes both fiction, poetry and drama, and nonfiction. It ranges across all aspects of women’s lives, from education, politics and the law, to health, travel and sport. It represents many of the strands and groups present in the women’s movement, and includes books by and on working-class women, black women, women of colour, Irish women, Jewish women, lesbians, older women and women with disabilities, as well as publications from different political strands within the Women’s Liberation Movement.

Today, the Feminist Library is still a space which supports and encourages research, activism and community projects, including our Women’s Studies Without Walls programme, which we initiated to try and bridge the seemingly ever-widening gap between academics studying feminist struggle and activists doing it. Our rooms are also used for a wide variety of other feminist meetings and events. 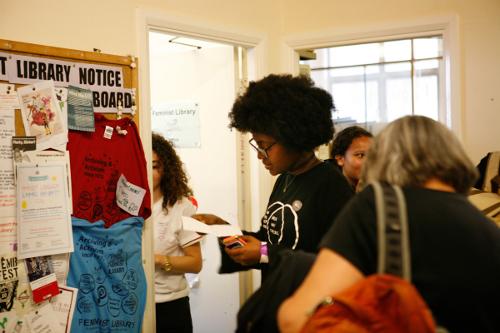 Despite the importance of its collection, the Feminist Library has always been precariously housed. We have had a succession of homes in London – above Sisterwrite Bookshop in Upper Street; next to Spare Rib in Clerkenwell Close; and above A Woman’s Place on the Embankment – before moving to our present home in Westminster Bridge Road after the GLC (Greater London Council) was abolished in 1986.

The library’s current location is unfit for purpose, and has become increasingly expensive. Several times it has seemed that the library would be unable to continue, and the collection would have to be split up and given away. The most recent crisis happened in December 2015 when our landlord, Southwark council, asked for an immediate increase in rent and service charges from £12,000 to £30,000 a year. This was unsustainable and meant that we faced eviction on 1 March, the start of Women’s History Month.

A small group of dedicated volunteers has kept the Feminist Library going since 1975. We are a registered charity (No 272410), but we do not receive any external funding, and are reliant on donations, along with other sources of income, including book and merchandise sales at feminist and other radical and activist events – and in our bookshop at the library every Saturday.

We want to support all parts of the feminist community and for them to support the library, thereby contributing to a movement as determined as ever to bring about total liberation from the forces of oppression, exploitation and hierarchy. Send us your work so that ideas can be shared freely with the whole movement; use our space; and volunteer.

We need feminists to rally behind the library and actively support us, so that together we can ensure that the Feminist Library continues to thrive, and so that we can preserve a vibrant network of feminist publishing and activism long into the future.

We have launched a new Friends Scheme whereby people can show their support by signing up to give a regular monthly donation. Friends will receive certain discounts and benefits, and our enormous gratitude! With enough uptake, this can provide a sustainable income to secure our future development and protect our collection.