Rory Fanning, Worth Fighting For: An Army Ranger’s Journey Out of the Military and Across America 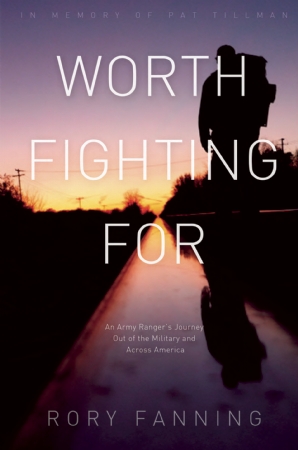 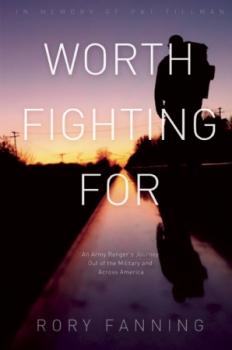 I was looking forward to this book – an account of Rory Fanning’s walk across America in memory of his friend, Pat Tillman.

I am usually drawn to stories of individuals undertaking major endurance events, and this had the added bonus of being carried out by someone working for peace.

The comments on the back were all overwhelmingly positive so I was a bit disappointed that Worth Fighting For didn’t quite match my expectations.

It starts well enough, describing Fanning’s motivations for setting out on the walk. A former soldier, Fanning applied for conscientious objector status after becoming uncomfortable with the wars in Iraq and Afghanistan. For six months, he was kept in limbo by the army, until he was suddenly discharged shortly after Tillman’s death.

When it subsequently emerged that the military had covered up the fact that Tillman was killed by friendly fire, Fanning realised his discharge had been expedited to avoid too much scrutiny. His decision to walk from coast to coast came from his desire to make sense of these events, to ‘get my mind right’, and to understand the country he had fought for and felt he had let down. And in doing so he would remember his friend by raising money for the Pat Tillman foundation.

After this the book enters familiar territory for anyone used to accounts of long distance walks.

Fanning describes places where he pitches his tent, the people he encounters, and reflections on his journey. This is interspersed with memories of his time as an Army Ranger, and brief historical notes about the land he passes through.

There are days when the walk is a breeze, and days when every muscle aches and the weather is against him. There are moving encounters with strangers such as the police officer whose brother had been killed in Iraq, and 10-year-old Caleb who helps his mum, knowing he can’t leave home until the mortgage is paid.

Whilst Fanning is occasionally barred from camping by barbed wire and angry landowners, most people are welcoming and the generosity of strangers is heartening to read about. And as he walks he remembers how the army broke him down to make him function as a soldier, how he managed for a while till his humanity prevented him from continuing, and how he was ostracised by his unit once he’d applied for conscientious objector (CO) status.

It’s all interesting enough and the story of how Pat Tillman’s death was exploited by the military for propaganda purposes is enough to enrage any anti-war activist.

Likewise, Fanning’s forced tour of duty in Afghanistan after he declared his CO status confirms every prejudice one has about the cruelty and dogma of the army. His realisation that he has more in common with the Afghanis than the former comrades who push him to the edge of the camp is a powerful one.

But there’s something missing for me.

The episodes shift quickly and somehow lack continuity. He mentions at one point that he needs to speak out politically, but doesn’t seem to follow up on this. A major personal revelation that the charity he is walking for is limited in its ability to deliver change is barely explored.

As a result, I was left feeling I’d skimmed the surface of his experience, rather than understood it as fully as I might. I applaud the endeavour, but the story failed to engage me as much as it could have. Which is a pity because Fanning’s story is one that’s worth telling, and his physical and emotional journey a feat that should inspire us all.