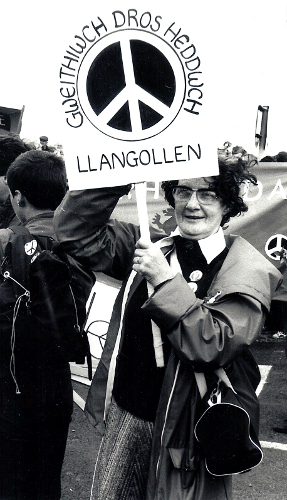 Elisabeth (Lib) Rowlands-Hughes of Llangollen, who died aged 96 in November 2014, was remembered by friends, including representatives of peace groups from Wales and beyond, at a celebration of her life held in April.

Born at the end of the First World War into a family that included influential preachers and pacifists, Lib recalled spending time with her older cousins, the Davies sisters of Gregynog, and conscientious objector George M Ll Davies.

Raised in the wake of the terrible conflict that claimed so many lives from a generation of young men of all classes, including four of her uncles, Lib had no time for the glorification of war. She deplored the way the centenary of the First World War has been exploited to drum up patriotic fervour and support for ongoing warfare.

An active member of the pacifist Peace Pledge Union from her late teens, Lib pledged to ‘renounce war’ and ‘work for the removal of all causes of war’, which she did in her inimitable style for the rest of her life.

In the 1950s, she was part of the movement that became CND and much of her activism thereafter focused on nuclear issues. Along with her cousin Gwen Robson, Lib was a key player in the local peace groups that worked tirelessly at home and joined with others across the country to campaign for a nuclear free world.

When Llangollen International Eisteddfod committee once refused a peace stall because it was ‘political’, Lib and her friends set up in a back garden adjoining the Eisteddfod field and lured visitors through a gap in the hedge.

During the Snowball campaign in the 1980s, Lib was one of the activists who used the symbolic cutting of the fence of nuclear facilities such as Capenhurst to highlight nuclear issues.

With her trademark humour and enthusiasm, Lib was always ready to engage open-minded people from any background and her network of friends stretched around the globe.

Meanwhile, those who put power or privilege before common sense and decency were liable to find themselves on the receiving end of her tireless activism, from letters and phone calls to anarchic direct action. Although we miss Lib badly, her life and work continue to inspire us.