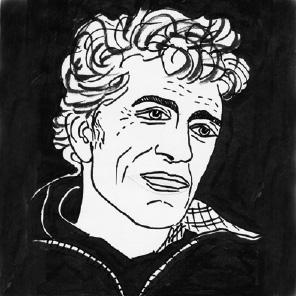 Our regular columnist recalls the big impact of a pacifist uncle

It’s a curious journey to become a pacifist. I wonder if other pacifists who read Peace News – PN readers are not necessarily pacifists, incidentally – are like me, in that they ponder the whys and wherefores of their own journeys. If you’re born into a Quaker family or your parents are otherwise pacifists, then the journey may have a certain inevitability but how, otherwise, does pacifism take hold?

I’ve found as I’ve become older my pacifism has become more committed, more unshakeable, but it is no more popular a cause than it has ever been. My dad believed in the war against fascism but as a sheet-metal worker he was not called up for the Second World War. Instead he was directed to work at Gloster Aircraft and there worked at making bomber fuselages.

So dad survived the war and never left me and mum and my cousin Paul alone while he fought the war overseas. Paul lived with us in Cheltenham during the war because his dad, my Uncle Bert, was spending two spells in Wormwood Scrubs as a conscientious objector.

So, my mum brought up the pair of us while Aunt Win stayed in London driving a horse-drawn milk float to keep the home fires burning and to be on hand to visit Uncle Bert in prison.

Thus Paul escaped the blitz and he and I shared a bedroom. At night before we went to sleep he would talk about his dad and what his life was like in prison. He told me for instance that his dad had jelly and cake there and even a glass of shandy. I had no idea what shandy was and nor had Paul. However, jelly was the greatest treat we could imagine and of course Paul couldn’t visit his dad in prison and see for himself.

Good old Aunt Win had told him a fairy story for comfort while his dad actually had a tough time. He was isolated and often ill. He told me – when I had grown-up – that he wouldn’t have survived without the care and concern of the Quaker prison visitors.

My uncle wasn’t a Quaker himself but he was an absolutist and so when, after his first spell in the Scrubs, he again refused to take any part in the war effort, he was sent back to prison.

Even at the age of seven or eight I was aware that – jelly or no – prison was not where I wanted to be. Paul and I of course were Little Englanders then – Mr Churchill our hero, and the king. The Germans were so-called because they were nasty like germs and it was absolutely inevitable that ‘we’ would win the war.

We knew no fear and the violence of the war passed us by in Cheltenham. Meantime, mum and dad wouldn’t let us have – to our dismay – toy guns and we never heard any war talk apart from on the Nine O’Clock News on the wireless.

In some mysterious way, Uncle Bert’s pacifism had a far greater impact on me than my dad’s anti-fascism and I think from thereon I was an instinctive pacifist and have remained so. Of course, no sooner was the Second World War over than ‘The West’ and Soviet Russia began preparing for the Third World War, and the threat of nuclear annihilation has hung over me and my generation for most of our adolescence and our adult lives.

My possible stint of ‘national service’ was deferred because I was a student when I turned 18, and by the time I’d passed my exams it had been discontinued.

Thus I never registered as a conscientious objector and the only cells I’ve occupied have been in the cause of nuclear protest.

As for my own sons – now 16 and newly 18 – I failed to stop them having toy guns and they still play war games on their computer screens. They’ve grown out of toy guns, they know that I write for Peace News, and they’ve both said that they’d never ever join the military or the police force. I’ve never heard a violent remark from either of them and they’ve never been in a fight with each other or anyone.

They are off on their own curious journey now and I hope for the best. I love them and they love each other. That’s a good start.