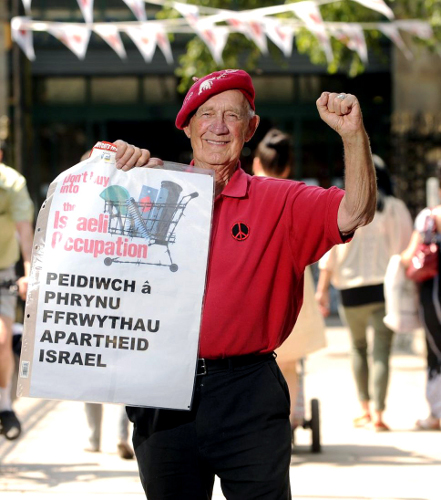 Ray Davies, the indefatigable peace activist, socialist, local representative of his people in Bedwas, Trethomas and Machen, and lover of male voice choirs, died age 85 on 7 May, election day. He would have lamented the result.

Ray bore his pancreatic cancer with the same courage he had when he faced the dangers underground as a boy miner, the police on picket lines during the Miners’ Strike, the teargas and tanks in Ireland, and the bullets in war-torn Gaza.

At his memorial on 15 May, Bedwas Workmen’s Hall was packed to capacity with more than 500 people drawn from every aspect of his remarkable life. Ray lived within a four-mile radius of his birthplace in Llanbradach, but was known across the world, as messages of support from as far afield as Gaza and the US made plain.

This memorial shared memories of Ray and allowed his community to express their appreciation for a lifetime of public service. Those present included the lord mayor, Ray’s fellow town and county councillors, MEP Jeff Cuthbert and MP Wayne David.

Newport MP Paul Flynn had been with Ray in Caerwent Peace Camp when he was attacked with a baseball bat for protesting against nuclear weapons.

Betty Hunter was among the representatives of Palestine Solidarity Campaign. Ray had made many visits to Gaza, the West Bank and Israel. Indeed, while escorting ambulances carrying wounded Palestinians to hospital, he had been shot in the head. And in London, he was beaten by the Metropolitan Police during a Gaza march.

Hanif Bhamjee represented Wales Anti-Apartheid. Along with other members of Côr Cochion, the activist Red Choir which he helped form, Ray was once arrested in Merthyr for singing in support of the South African boycott.

Comrades from the anti-poll tax campaign also came from London to join the commemoration. Ray always believed in the power of music to communicate and change lives. As well as Côr Cochion, Caerphilly Male Voice Choir and Cardiff Arms Park Choir sang movingly at his memorial.

Ray believed in a strong political voice for Wales too. He recently spoke on the steps of the Welsh assembly, calling for greater powers to be devolved from Westminster, and members of the ‘Yes for Wales’ campaign were at the memorial to show their appreciation.

The local community attended the memorial in great numbers: local environmentalists who sought to preserve the beauty of the woodlands in Graig y Rhacca; residents opposing the development of Ray’s beloved Cwm; local historians; and the many people who had come to Ray for advice and help. He touched so many lives.

Ray Davies truly believed he could change the world, and he made us believe we could too. So, now it is our turn to preserve the things we love that he fought so hard for. Ray left a big hole in our lives, but we must all do the best we can to carry on his spirit.

A celebration of Ray’s work for peace and justice will be held in the Temple of Peace in Cardiff on 4 July 2015.