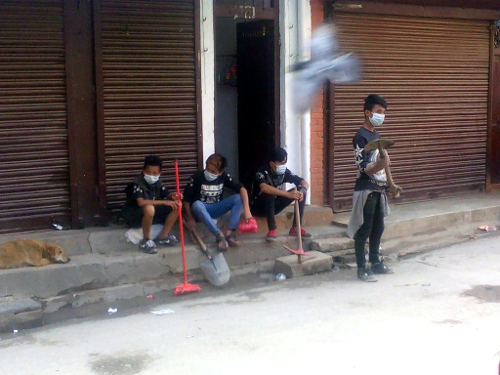 An earthquake diary by a Nepali anarchist 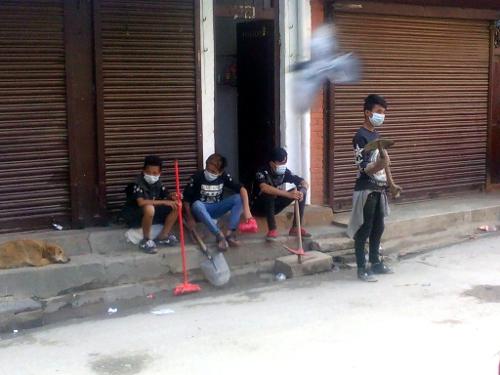 30 April: ‘Came across these 4 young punks in charge of clearing out debris in their
own neighborhood today. This is an all ages show everyone.’ photo: Yuva Ekta

Nepal was hit by a long-predicted earthquake (7.8 on the Richter scale) on 25 April. Over 8,000 people were killed. There were over 100 aftershocks, including a 7.3 quake on 12 May. Yuva Ekta (Youth Unite), a Kathmandu punk band, used its Facebook page to communicate with like-minded folk inside and outside Nepal.

Hope everyone is OK, staying strong. The band is sleeping in a car + a tent with the kids, safe.

We have two hands + two feet + other resources coming in... anarcos + punk friends from all over the world are willing to help. Please let us know if you need anything.

Went to Om Bahal [a Kathmandu neighbourhood] + sat talking to those camping in the real inside part where the Red Cross didn’t reach. Four families (22 people) whose houses are demolished were left out – the spirit of community being broken by the fact that most were ‘going back inside’.

We asked them what the most pressing needs were + decided to answer their call for help. We bought gas, cookers, cooking stuff, sacks of rice, daal, oil, salt, etc as immediate relief since their own stuff has been buried deep in rubble.

It’s a very small thing, but for the folks of the Yuva Ekta neighbourhood, we wanted to give immediate relief where the government or local government is not responding.

This is so hard. It’s a learning process every day. We are still figuring it out, ie what is the best way to help + what to do with money. Our best tactic so far is to just go + talk to people who have not had any response from any org as yet.

Being fiercely independent punks, we aren’t used to trusting big shots who talk better than us + have all the contacts. We went to a large meeting of middle-class young people + foreigners who are putting efforts together in teams to send supplies.

Admittedly we felt lost in the milieu + didn’t know where we ‘fitted in’. .

About sending money: I don’t know about sending some money... although we feel damn awkward about handling any well-intentioned donations, we will no doubt try our best to see that it goes to the right place.

We will take the responsibility if you wish + we will make sure it goes to the right people + keep you posted. However, as I said, some of the relief – if not most – will be a long-term process from now on.

We ourselves had to move out of our squatting situation in tents + cars into another location today since our own homes have too many cracks. We are burnt out.

Now I need a break from Fbook because I just read that a lot of it’s about ‘low self esteem’ + it got my antennae going... ‘Hmmm, now that you mention it....’

Apparently some of us are having a hard time working together with bideshis (foreigners – those from the west or westernised easterners?)

This is a really sensitive topic but anecdotes are coming straight from the field. I heard stories of a foreign medic in the hills having tantrums about the ‘Nepali attitude’ just because people crowded around to have a look whilst he was treating someone.

Yes, it’s common in Nepal that we all gather around a ‘happening’, however, western-style temper tantrums are not going to win hearts and minds.

Instead of creating a makeshift tent or his own human shield with his team, he reprimanded the villagers + stormed off refusing to treat anyone + said ‘Let’s move on to the next village’.

This man and his friend did the same everywhere they went.

In one village, he was pissed off with the person who was hosting him that night so he went to another house to eat + came back to sleep there. That’s not done in Nepal, especially when the other house he went to eat in belonged to the first house’s brother.

But Nepalis remained cool – he’s here to help right? So they quietly served him food muttering ‘yo manche bowla rahicha’ (‘this man must be mad’).

In fact, right before they even went off on the field, one of my friends stepped on his toe by mistake during a meeting + the guy made harsh gestures with his fingers pointing to his eyes + an angry expression indicating ‘look where the hell you’re stepping!’

During this same meeting, some people began giving case stories of villages + sometimes people would speak at the same time.

This infuriated the other bideshi who, with a big voice, scolded another friend of mine who had just tried to join the conversation: ‘Stop! Stop! I hate this. This is typical Nepali style, everyone trying to talk at once! I don’t want this. I want one by one. Keep quiet until it’s your turn. I really hate this Nepali style.’

He was equally a volunteer like all of us, was married to a Nepali woman + even spoke some lingo, and suddenly because he was a white guy – a medic, with contacts, he was the authority.

There was absolutely no humility. I began to hate humanitarian professionals on the spot (plus most get paid!). I whispered under my breath: ‘I’ll give you fucking Nepali-style, you fuckwit!’ + walked off, because I couldn’t bear to hear him talk.

Everyone was too scared to really confront + tell these guys they’re dickheads with skills + we’re all supposed to think they’re Gods.

My friends who went on the field with these guys said: ‘Maaan, we were really close to being lynched by a stone-throwing mob of villagers thanks to these expert bideshis who had the worst tempers.

‘The whole time we just had to mediate between their anger + the villagers’ anger that followed.’

I met some guide friends who have been involved in relief work who talked about how they were building shelters with other bideshi volunteers: ‘They drove us crazy! If things were not measured to the millimetre, they would un-do the whole structure again + start from the beginning.

‘It was too much perfectionism in a time when people are standing around desperate for some shelter. They’d get angry with us for not conforming to their ways.’

He went on to say how he felt a lot of this momentum is coming out of a lot of emotional needs of people who saw devastation for the first time with their own eyes.

I thought about it + it definitely relates to most of what I’m experiencing personally – myself being a single mother and my ex off in the field indefinitely saving the world, not sharing parental duties in weeks.

‘People are dying’ he said. As mothers who have ‘volunteered’ all our years, you still can’t argue with that kind of one-liner can you? The emotion gets so strong, that they start to take themselves too seriously + forget about common decency because their ‘cause’ creates a much stronger emotion.

And that is why I hate human beings sometimes. Too egotistical + self righteous, too emotional. Always forgetting the basics for the worldly goals, stepping on other’s heads as they stride off to the front line.

Another friend told me how a medic worker came to Nepal to volunteer. The person was totally unfit + couldn’t walk our terrain. They had to push him up the hill, and help him with every step, then take care of him the whole time. Neither did he speak the language.

‘Now I get emails from people wanting to come + volunteer from abroad + I say: “No thanks, we know the terrain, we can manage ourselves”.’

On the flip side, there is always the question one should ask (learnt from Chomsky) – every time something is done, you have to ask ‘who really benefits?’

This question always gets my anarchist ass paranoid.

Sometimes it turns out that the main donor or the really nice main contact person building 50 houses in that village just happens to be related to someone belonging to the right-wing nationalist party or some such thing.

The punk dilemma – do you shut your eyes + do it in the name of humanitarian rescue + relief or do you say: ‘What the heck, do I really want this guy’s father to get the votes next year just because he has all the dough + contacts to rebuild a devastated village?’

The next punk dilemma – one thing I kept asking about – was the gender divide in society.

I will recount my friend at Himalayan Medic’s story: ‘At the end of a hard day’s work as a volunteer in the field, the typical thing the local male host does is that he wants to serve you alcohol after the food that the women most of the time have slaved away cooking for you in the first place.

‘The host wants to impress his educated Nepali guests or foreign save-the-worlders. He stays up all night pouring cups of alcohol talking to you and you can see his wife + daughters sitting there half-asleep waiting for the next order of alcohol or food items.

‘From now on I say: “No, that’s enough. Everyone go to bed. The women are suffering until the evening. When do they get their break?”’

We have to be our own masters + act, decide + think things carefully through before getting caught in the whirlwind.

I never dreamed of quoting this guy, but even Jesus said: ‘There will be poor always, pathetically starving’.

I feel we have to look at it as a kind of training in life: it’s what you always do in your day-to-day life that counts + that will measure how you react in times of urgency.

Not the other way round.

It’s not a bandwagon, it’s where the approach, or how you get somewhere, is as important as getting there.

On saying that, we should always be in a flux of creating volunteer based action – if everyone was always involved in humanitarian work, unpaid, there would maybe be less ego, emotion + opportunism.

These posts are taken from: www.facebook.com/yuva.ekta.94 Sareena is not actively fundraising, but supports Himalayan Medics and is creating a DIY infoshop ‘active + safe centre’. If you’d like to donate to either cause, please email her:
earthseaskies@gmail.com