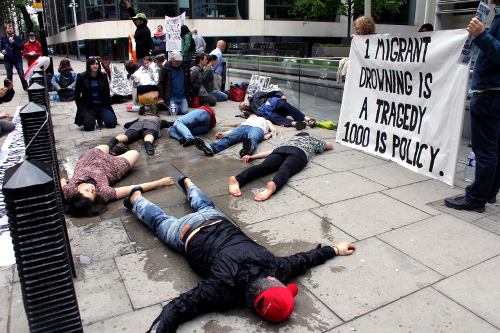 26 May 2015 Feature by Ben Cowles
15 May: die-in outside the home office to protest against migrant deaths in the Mediterranean sea. Photo: CPT

Did you think that, as a British citizen, you would be allowed to live in Britain with whoever you chose to marry, however rich or poor you were?

Since 2012, the home office has required British passport holders married to, or in a civil partnership with, someone born outside the European Economic Area (EEA) to earn at least £18,600 a year before their foreign spouse can settle in the UK. That figure increases to £22,400 if the couple already have a child. Additional children require an extra £2,400 each in the British parent’s income.

Until the Briton is earning the minimum salary, the foreign partner is expected to remain in their home country and to pass an English language test. The whole process can cost thousands of pounds in application fees and take years, separating couples from each other and their children across continents and reams of bureaucratic paperwork.

The last coalition government brought in the new regulations with the belief that people who bring in migrants should not rely on the state.

In an interview on the Andrew Marr show in 2012, the Conservative home secretary, Theresa May, said when drafting the policy the home office asked the Migration Advisory Committee to advise them as to what the figures should be. She added: ‘We’ve actually chosen at the lower end of the range, but it’s the point at which people would normally not be reliant on income-related benefits.’

Married heterosexual partners have it relatively easy in comparison to LGBT couples who might not have the support of their families, whose relationship might not be recognised in their country, or who might even face persecution from their own government.

‘Can you imagine the stress of looking for work if your partner was back in Uganda, Pakistan or Syria? The stress toll must be enormous’, said Paul Dellaine, the executive director of the charity UK Lesbian and Gay Immigration Group (UKLGIG).

‘You know’, Paul continued, ‘you go to a bar in a foreign country and met someone. You might fall in love, want to get married and get on with your life. You might not know anything about the immigration system and the huge battle you have to take to be treated the same as everyone. It’s an odious situation.’

Since the charity began in 1993, UKLGIG has campaigned for equality in UK immigration law for LGBT asylum seekers and those who wish to settle here with their same-sex partner. The group runs monthly advisory sessions for clients, with immigration lawyers working pro bono.

Many of UKLGIG’s clients, Paul says, are struggling with the income demands. Many do meet the threshold but aren’t able to prove it. ‘It’s not just LGBT couples, this law affects everyone. The government is basically saying you can’t fall in love with a foreigner if you’re poor. It’s straight up persecution.’

There is a way around the rules, one that also allows both heterosexual and LGBT couples to stay together, known as the Surinder Singh (SS) route.

Named after a 2006 court ruling, this relies on EU free movement laws that get around the UK’s limitations. It involves living and working in another EEA state and then applying for an EEA Family Permit. Once the permit has been granted, European law trumps UK law, and the couple are free to settle down in the UK.

Roz, a British citizen, her Thai wife Arty, and their twin daughters are one such family who have taken this route and been granted an EEA family permit. Currently living in the Czech Republic, the family are returning to the UK in the summer to begin their new lives. Roz is resentful of the stress this policy has put her family through. ‘It’s such a cliché to say it, but the policy doesn’t respect people as human beings at all.’

Roz moved to Thailand in 2009, ‘supposedly for a couple of years of hedonism and selfish living, though it didn’t turn out that way.’ She met Arty two months in, and a year later they moved in together.

It wasn’t until after they were married and Roz was pregnant with the twins that they heard the visa rulings had changed. ‘I can’t stress enough,’ Roz told Peace News, ‘if we’d had any sort of warning that the government was going to do this, then we would have done things so differently. I don’t regret having the children at all, but I definitely would not have gone through fertility treatment in Thailand to then be stuck there. Once I knew that I couldn’t go home, I just had to get out. It’s not nice living somewhere different, if you’re not allowed to go home.’

If Roz had left her wife in Thailand while she and the kids moved to England, she doubts she would have found getting an £18,600 salary very easy. ‘I would definitely have had to work part-time or spend all my salary on childcare. So I could have worked part-time and taken loads of money from the government, or I could have worked full-time with my partner supporting our children.’

‘These regulations are a tragedy that will go on to affect more and more people’, says the communications manager for the London based NGO Migrants Rights Network (MRN), Jan Brulc. ‘It’s £18,600 regardless of where you live, and it is this lack of flexibility to reflect regional variations in wages that makes it so much more difficult for those living and working outside the south-east [of England] to satisfy the rules.’

Brulc’s comments reflect the findings of a recent study by the Migration Observatory at the University of Oxford which estimated that 43 per cent of employed Britons do not earn enough to sponsor a non-EEA spouse. The proportions drop to 30 per cent for those working in London and rise to 49 per cent for those in Yorkshire & Humberside. The rules also hit harder younger people (60 per cent of people in Britain in their 20s don’t earn above £18,600) and women (57 per cent fall short of the income requirement).

Established in 2006, MRN was created to support migrant communities in the UK and provides the secretariat for the All-Party Parliamentary Group on Migration which called for an immediate review of the rules following an inquiry in 2013. ‘As a bare minimum,’ Jan argues, ‘we’d like to see the financial requirements lowered to the national minimum wage.’

In their political manifestos, neither the Conservatives nor the Liberal Democrats mentioned where they stood on this policy. Peace News reached out to both parties, but neither responded. David Hanson, Labour’s shadow immigration minister said that if elected, the party would launch an immediate full review of the family migration rules. The Green Party manifesto outlined plans to abolish the regulations altogether.

The high court in 2013 suggested that the government should lower the financial requirements, saying that the rules represented ‘a very significant interference with British citizens’ and refugees’ rights.’

A year later, however, the court of appeal overturned the high court’s decision. ‘The regulations are scheduled to go back to the supreme court’, said Jan Brulc. ‘When, we don’t know. Hopefully this time they will look at the case as a whole and consider the anguish caused to separated families, and not just debate the legal jurisprudence.’

Ben Cowles is a student journalist working with Peace News. He is working on a documentary on this subject: www.wheretheheartisdoc.com

On 4 July, ice&fire theatre company hold the UK premiere of My Skype Family, a new documentary play by Christine Bacon exploring these new immigration rules. The performance at the Southbank in London (£10/£5) is a collaboration with the Joint Council for the Welfare of Immigrants, with the support of the Barrow Cadbury Trust. More info: www.iceandfire.co.uk