Fracking, values and an ethics for the ‘anthropocene’ 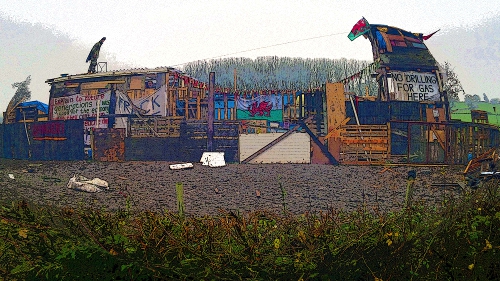 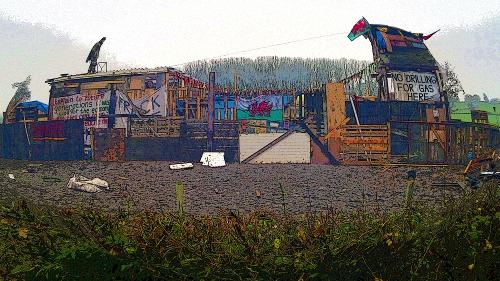 The newly-elected Conservative government is set to follow through on David Cameron’s infamous 2014 pledge to go ‘all out for fracking’. They will also cancel subsidies for new onshore wind turbines. Allowing free-market dogma to dictate ecocide rather than plan a sustainable energy future, this government is contemptuous of the greatest moral challenge of our age, climate change.

So dire is the impact of human activity on ecosystems that even stony-faced earth scientists argue heatedly over whether we have entered ‘the anthropocene’, a new geological era where homo sapiens is the dominant force in nature.

With communities poised to contest fracking by state-supported corporations at sites across the UK, environmentalists must reframe the moral challenge if we are to develop strategies to combat the necrotising neoliberalisation of life on Earth.

Looking to the values mobilised by social movements against fracking, I propose we set about constructing an ethics for the anthropocene: communal, rebellious and joyfully utopian.

‘Fracking’ is shorthand for the hydraulic fracturing of shale rock to extract methane or oil. The term is often used to include two other ‘extreme energy’ technologies which might be used in Britain, underground coal gasification and coal-bed methane.

Public concerns about fracking include excessive water use, earthquakes, well-head and transportation accidents leading to groundwater contamination, landscape degradation and increased traffic. The main objection, though, is that all fossil fuels emit carbon dioxide when they are burnt, causing climate change.

With fracking, there is the added peril of leaking methane, a greenhouse gas 25 times more ‘powerful’ than carbon dioxide in driving climate change.

Geopolitical opinion on fracking is split, with, for example, France and Bulgaria imposing bans. Meanwhile, the US energy economy benefits hugely, burning shale gas to reduce its national carbon emissions while exporting dirtier fossil fuels, vying with Saudi Arabia and Russia to be the world’s biggest oil producer. That said, following New York state’s decision to ban fracking due to its adverse impact on public health, other states are also considering legislating against the technology.

Though it may not mean fracking’s permanent demise in Scotland, the SNP government has declared a moratorium. Fracking in Northern Ireland is also on hold because of safety concerns.

A multi-faceted campaign by the network Frack Free Wales (FFW), with which I am working, has resulted in a residential anti-fracking protest, Borras and Holt Community Protection Camp near Wrexham.

In the wake of a year of protests across the country and a national petition submitted by FFW member Friends of the Earth Cymru, the Welsh government reluctantly declared a moratorium under pressure from Plaid Cymru.

However, FFW suspect that, once able to state its satisfaction with environmental regulation, the Labour-controlled Welsh government will allow extreme energy developments to go ahead in both Wrexham and the Vale of Glamorgan.

On 23 April, Aberystwyth hosted ‘Fracking and the Imagination’, a one-day public forum on the science, art and politics of fracking.

The original intention was to open up a ‘cultural front’ on fracking and, indeed, a number of artists are pursuing the sort of ‘fracktivism’ the forum anticipated. For example, Rebel Arts’ ‘Frack Discs’ replace defunct vehicle tax discs, while Artspark have produced a ‘DIY Fracking Kit’.

Moreover, the interaction between artists, activists, natural and social scientists, and concerned members of the public, propelled the forum beyond our intentions. Together, participants began to re-imagine our relationships with the Earth and energy, with light, sound and heat, with energetic materials....

Social psychologist Shalom Schwartz argues that there are universal human values. The main values of people in Britain advocating fracking are wealth and national energy security; the values mobilised by FFW are rationality, protecting the environment, taking responsibility, justice, and belonging.

Schwartz does not list rationality among his universal human values, but ‘wisdom’ comes closest. The other values are mainly traceable to his categories of ‘benevolence’ and ‘universalism’, with wisdom being in the latter. These are intrinsic or self-transcendent values, inherently rewarding rather than centred on external rewards.

An ethics for the anthropocene?

Analysing these values with the aim of making environmental campaigns more effective, I offer some observations. First, protecting the environment may be better enacted as unity with nature, challenging the notion of human dominion over nature. This has profound implications for how we take responsibility, participate politically and experience belonging.

Rationality, though essential to any contemporary campaign if it is to be adjudged credible by the media and so granted space, tends to exclude values such as variation in life, daring, curiosity, freedom and creativity. These values, which emerged so strongly during ‘Fracking and the Imagination’, Schwartz groups under ‘self-direction’ and ‘stimulation’, categories that indicate ‘openness to change’.

If we want to reshape the political as an arena where emotion is welcome, power can be challenged and environmental crises addressed, we might best deploy ‘openness to change’ alongside self-transcendence in our strategies.

If we allow our campaigns to be framed by the law, planning regulation and the constraints of a propagandist media, all predetermined to serve elite interests, the world is lost. Literally. There is only a limit to markets if we make it so.

More on ‘Fracking and the Imagination’ at: www.pygyrg.co.uk/blog/