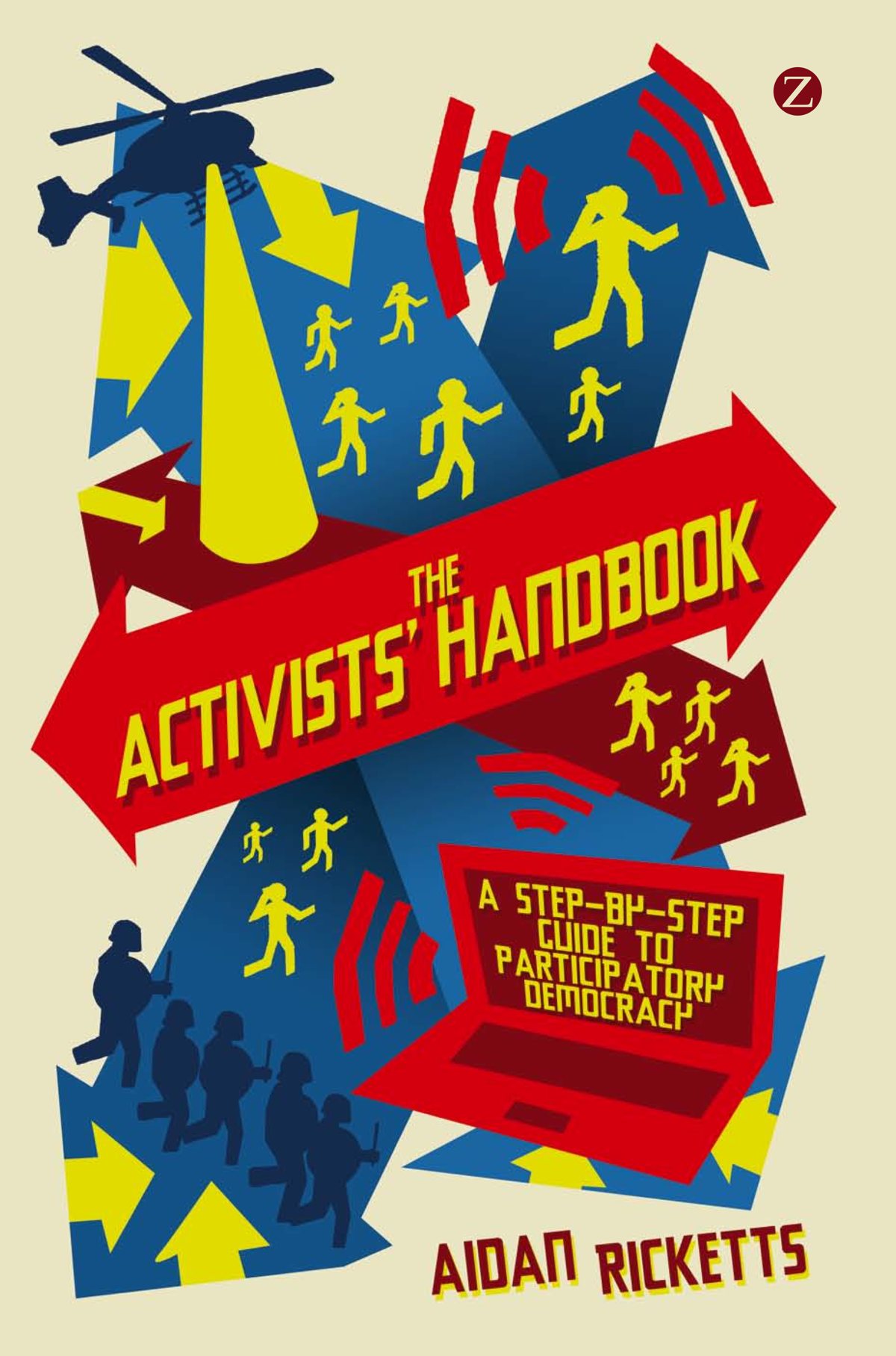 Here are two books by two longtime campaigners (both men, both white), trying to pass on lessons to younger generations, to folk newer to political engagement. As I was reading them, I was inevitably comparing them to two related, brilliant books that I think everyone involved in social change should read, that I’ve reviewed here before: Strategy & Soul, by Daniel Hunter; and Towards Collective Liberation by Chris Crass.

(So this is a review about being political active, written by a man [me], referencing books by four men. All of us with a middle-class upbringing, so far as I can tell, and all of us university-educated. Just keeping it real.)

If Strategy & Soul gets 10 out of 10 as a work to nourish and develop you as a person pursuing social change, and Towards Collective Liberation gets 9 (10 if you’re a young white anarchist), then I’d say Playbook for Progressives gets a solid 7 and the Activists’ Handbook (sorry, Zed Books, I love you but I have to be honest) is stretching to get a 5.

What’s good about the Activists’ Handbook? It seems to come alive where I think it most directly touches on the author’s personal experience and aptitudes: the sections on media work and police liaison. Here there are checklists, a step-by-step approach, something you can use practically.

On police liaison, Ricketts has an unusual tactic – ‘the right to be arrested’ – with which he’s had some successes:

‘In some cases police take offence at the fact that some people are knowingly going to break the law. It is a good idea to explain that they are making a political statement, which they have a right to do, and if they break the law “they have a right to be arrested and processes according to the law”. This rather odd-sounding “right to be arrested” is an amazingly simple way of clarifying the difference between a riot and an orderly demonstration of civil disobedience. From personal experience, this explanation usually calms the police officer down and defuses confrontation.’

There are also a few stories (inspiring and useful) coming out of Aidan Ricketts’ 12 years as a leading figure in the North-East Forest Alliance, defending old-growth forests in Australia – with considerable success.

I loved their takeover of the New South Wales forestry department building, first thing in the morning. The 20 activists took over the multi-story building before anyone had arrived for work – as soon as the security system deactivated to allow workers in. They’d made metal devices to keep doors closed from the inside, and used them to ‘lock’ all ground floor and basement entrances within minutes of getting in. Then they did a banner hang (‘Under New Management’), and used the commissioner’s official fax machine to send out pre-prepared press releases and communicate a new ‘Forestry Charter’ to all regional offices as an ‘urgent directive’.

Mostly, though, the book betrays its origins in Ricketts’ university-accredited activism training course at Southern Cross University, at the week-long Byron Bay Summer Law School programme. I found a lot of the book academic, plodding, over-comprehensive and obvious.

Here’s a sample of the writing style and level of advice: ‘Legal action is not always fun. It is hard work and often takes place under very stressful circumstances. If you want the court action to be successful you must put in the time and effort necessary to achieve your goal. Wins in court don’t come easily, and losses can certainly occur because of rushed or poorly prepared or poorly organized cases.’

I think, in general, Ricketts has tried to pack in too much, without having a strong enough prose style or personality behind the text to carry it off: democracy theory; strategy-making; media work; research; legislative action; direct action; corporate, digital and legal activism; and, finally, dealing with burnout.

Turning to Playbook for Progressives, the first thing you notice is that this is much more engaging, much more personal, and much more tightly-focused and -organised. Eric Mann sets out 12 roles of a successful organiser, and 16 qualities – 28 short sections, all in all – and each is illustrated with a real-life success story, often including a brief interview with, and perhaps a thumbnail biography of, a successful organiser.

One that really stood out for me was the story of a strategist, a high-level US trade union official, Bill Fletcher, who helped to defend five union members who were arrested while picketing the Nordana shipping company in Charleston, South Carolina. Because they fought back when state troopers and police violently attacked International Longshoreman Association strikers (while scab labour loaded a Nordana ship), the Charleston Five were charged with felony riot.

Fletcher, an African-American like four of the Charleston Five, developed an international strategy to confront the authorities not as a trade union, but as an expression of national and world opinion. South Carolina should be shunned for declaring war on the labour movement, and on Black workers in particular. As well as organising within the state, the defence campaign organised local branches throughout the world, pressuring their local representatives to put pressure on those in South Carolina, with the message that the South Carolina was a pariah state, damaging its reputation and its economy.

The defence campaign succeeded in splitting the Republican establishment in South Carolina, getting the attorney-general taken off the case, getting the charges dropped, and forcing Nordana to give up its effort to stop using union labour, and took on ILA dock workers. An amazing victory in a right-wing state where big business and local politicians had decided consciously to attack the local labour movement.

‘He constantly returns to the Los Angeles Bus Riders’ Union, a multiracial, multilingual, cross-class civil rights organisation with thousands of members which he has helped to lead to astonishing successes’

Mann also tells stories from his own experience of 40 years of community organising and trade union activism – including stories about his own shortcomings – and they’re powerful, inspiring and educational. There’s a big contrast with Ricketts’ somewhat lifeless prose.

Some roles: the foot soldier; the evangelist; the recruiter; the fundraiser; the cadre. Some qualities: ‘Builds a Base and Never Walks Alone’; ‘A Good Listener: Keeps an Ear to the Ground’; ‘A Strong Class Stand: Which Side Are You On?’; ‘Relentless: Won’t Take No for an Answer’.

Mann has a very practical focus on building powerful citizens’ organisations that can win change for oppressed people, and he constantly returns to the example of the Los Angeles Bus Riders’ Union, a multiracial, multilingual, cross-class civil rights organisation with thousands of members which he has helped to lead to astonishing successes (forcing the transit authority to replace inaccessible heavily-polluting diesel buses with 2,500 wheelchair-accessible, compressed natural gas cleaner-fuel buses, to institute an affordable bus pass, and to put on a million more hours of service)

How useful is it to list the roles and qualities of a successful organiser? One way of looking at it is to see these lists as a personal challenge to improve in areas where you might not be so strong; or a way of valuing things that you’re already doing. Another possible use might be for a group to clarify for itself the roles and qualities needed in a healthy campaigning group, to assess where it may need to do some work, and to set some goals for its own development.

There’s a fundamental difference between the two books which deserves discussion that I can’t give here, which is that Ricketts is talking about ‘activism’, in the sense of loose networks of autonomous affinity groups (whose members are generally not personally affected by the issue concerned), which are often focused on public opinion and the media; while Mann is talking about ‘organising’, in the sense of building a powerful organisation of dues-paying members (who are mostly directly, personally affected by the issue) which are focused on changes in a particular oppressive institution which the members have a day-to-day, face-to-face relationship with.

There are common concerns in both kinds of political engagement, but there are also big differences. Both are needed right now, but I think Mann is right to say that lasting change depends on there being much more radical organising, and stronger connections between radical organisations.