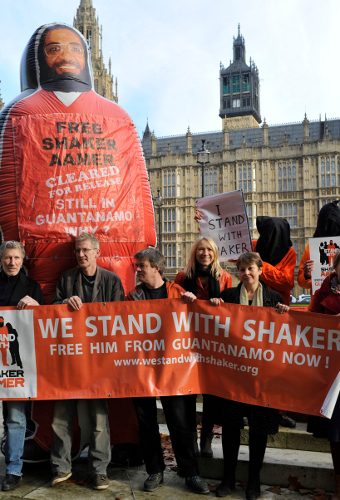 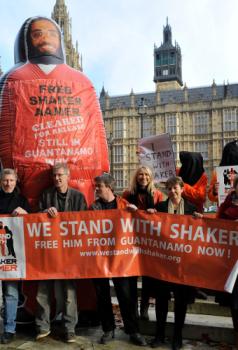 On 24 November, a new human rights group, ‘We Stand With Shaker’, launched itself opposite parliament in London, calling for the release of Shaker Aamer, the last British resident in Guantánamo, and his return to his family in the UK. Despite being approved for release twice by the US authorities – under president George W Bush in 2007 and under president Barack Obama in 2009, Shaker is still in Guantánamo. The launch was attended by Clive Stafford Smith, director of Reprieve; John McDonnell MP; Caroline Lucas MP; John Pilger (pictured) and comedian Jeremy Hardy. A giant inflatable figure of Shaker Aamer represented how he is the ‘elephant in the room’ when it comes to Britain’s dealings with the US. 24 November marked the 13th anniversary of Shaker’s capture by bounty hunters in Afghanistan, where he had travelled with his family to provide humanitarian aid.

Join the ‘We Stand With Shaker’ photo campaign: www.westandwithshaker.org