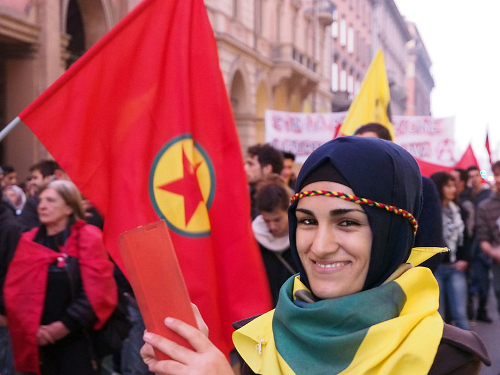 International attention has focused recently on Kobani/Kobane, a Syrian Kurdish town on the border with Turkey, besieged by the al-Qa’eda splinter group ISIS (known to opponents by its Arabic acronym ‘Daesh’). Here a well-informed non-pacifist anarchist explains some of the background to the conflict. 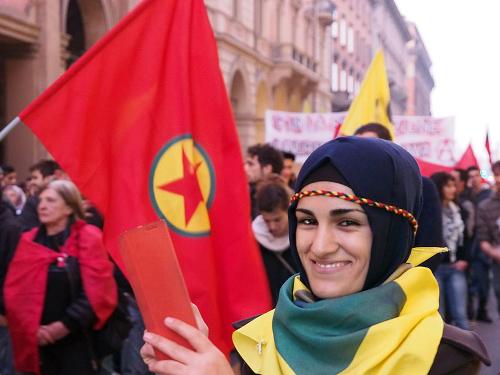 The heroic resistance of the people of Kobane in fighting the onslaught of the Daesh (ISIS) fascists since mid-September, has led to a surge of international solidarity. A multitude of articles and statements have been written and protests have been held in cities across the world. Kurds have flooded across the Turkish border to help their compatriots in the fight despite being brutally pushed back by Turkish forces, and others including Turkish comrades from DAF (Revolutionary Anarchist Action) have gone to the border to support in keeping it open to help the flood of refugees escaping to Turkey. There have been calls to arm Kurdish forces and calls to support DAF and send aid for refugees.

Yet this solidarity with Syria’s Kurds has not been extended to non-Kurdish groups in the country whohave been fighting, and dying, to rid themselves of fascism and violent repression and for freedom and self-determination. It’s often said incorrectly that sectarianism lies at the heart of the Syrian conflict. It’s necessary to understand to what extent sectarianism plays a role in our response too.

The protest movement that erupted against [Syrian president] Bashar Al Assad in 2011 united people across Syria’s diverse ethnic and religious spectrum in a common struggle for freedom. Kobane was no exception. The Kurds who are the majority in the town had long suffered under the Arabisation policies of the Baathist regime, and were amongst the first to rise up when the Syrian revolution began.

In this protest, from mid-2012, Kurds and Arabs in Kobane jointly called for the downfall of the regime and chanted in support of the Free Syrian Army, raising the Kurdish flag at a time when this was a dangerous act of defiance. But, from its earliest days, the Syrian protest movement in Kobane and elsewhere failed to gain international support. Had it done so the country would not have been destroyed to such a degree that ISIS was able to take control of large areas.

Over the past three years, relations between Syria’s Arabs and Kurds have been fragile and changeable, subject to both the Assad regime’s manipulation of ethnic divisions, and to the misguided political machinations of opposition politicians from both groups who have put their own interests and agendas above the people’s vision of freedom. Yet, in spite of this, activists on the ground have continued to stress the importance of Kurdish-Arab popular unity and to resist ethnic and sectarian divisions. Few international solidarity statements have mirrored these calls.

"Experiments in local, autonomous, self-organisation have been a defining feature of the Syrian revolution"

Much of the international solidarity for the Kurdish struggle stems from support for Rojava’s inspiring social revolution [Rojava being the autonomous Kurdish area in north-eastern Syria]. The Kurdish-majority areas of Afrin, Jazira and Kobane were able to establish the autonomous region following the withdrawal of Assad’s forces in July 2012. A Social Contract was developed which stresses the desire to ‘build a society free from authoritarianism, militarism, centralism and the intervention of religious authority in public affairs’. It affirms the principle of local self-government for all cantons of the region where governing councils and public institutions would be established through direct elections in a decentralised confederation.

The charter enshrines unity and coexistence amongst the regions diverse ethnic and religious groups, a respect for human rights and an end to gender discrimination, and affirms people’s right to self-determination. In a radical reorganisation of society towards democratic confederalism, the people of Rojava have established councils and communes throughout Western Kurdistan to self-manage their communities in areas such as health, education and trade; and to address the issues facing society.

This provides a powerful example of alternative forms of social organisation as a counterpoint to centralised, authoritarian control. While such developments in radical democracy are a beacon of light in what’s fast becoming a region of darkness, anti-authoritarians should not romanticise the Kurdish Democratic Union Party (PYD). Talking about the establishment of the Autonomous Region, Syrian-Kurdish anarchist Shiar Neyo states:

‘From the PYD’s point of view, this was a golden opportunity to impose its authority and expand its sphere of influence in the Kurdish areas in Syria. This political pragmatism and thirst for power are two important factors in understanding the party’s dealings with the regime, the revolution, the FSA, and even the Kurds themselves. They also help explain many phenomena that seem to bewilder some commentators and analysts, such as the suppression by PYD forces of independent activists and those critical of the party’s policies, in much the same vein as the Ba’athist regime did.

By way of example, one can cite in this regard the Amuda massacre in July 2013, in which the People’s Protection Units (YPG) opened fire on unarmed demonstrators, or the closure of the new independent radio station Arta in February 2014, under the pretext that it was not “licensed”. The PYD’s forces have also assaulted members of other Kurdish political parties and arrested some of them under a variety of excuses; they have been controlling food and financial resources in the Kurdish areas and distributing them in an unjust manner on the basis of partisan favouritism, and so on and so forth. Such practices remind people, rightly, of the oppressive practices of the Assad regime.’

An obvious tension therefore exists between the authoritarianism of the old guard of the PYD which maintains a top-down vision, and the thousands of Kurds who believe in, and are trying to realise, radical democracy from below, and who should be supported in that aim. But the Kurdish region of Syria is not the only place where a social revolution is putting into place radically new ways of organising, although it has benefited from greater space and stability, relatively speaking when compared with other areas of the country.

Experiments in local, autonomous, self-organisation have been a defining feature of the Syrian revolution, and hundreds of local committees and local councils have been established to administer basic services and coordinate revolutionary activities. Yet these people are not seen to be deserving of international solidarity because they have no leader who has converted to libertarian municipalism [as the imprisoned PKK/PYD leader Öcalan has done]. The fact simply is that they have no leader at all and these forms of horizontal organisation arose spontaneously from below as a response to the destruction of the state.

Leila Al-Shami is a founding member of Tahrir-ICN, a network that aims to connect anti-authoritarian struggles across the Middle East, North Africa and Europe.

This is an extract from a longer blog posting that called for arming ‘all revolutionary Syrians’ fighting the Assad regime and ISIS:
www.leilashrooms.wordpress.com. Among the organisations Leila recommends are the unarmed, neutral Syrian volunteer civil defence group, the White Helmets, who aid survivors immediately after a bomb attack; and the website Syria Untold, which features grassroots groups and campaigns inside Syria: