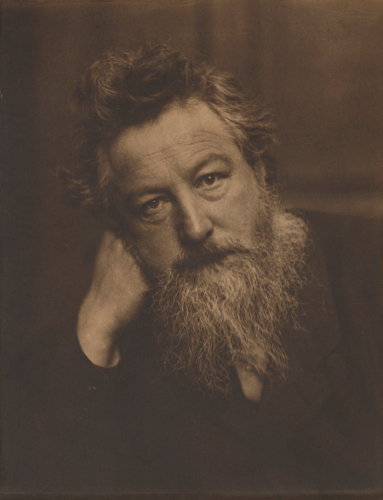 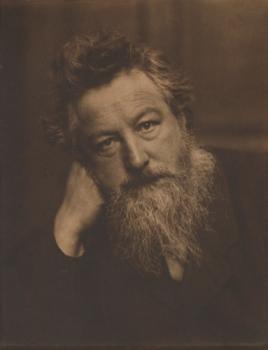 William Morris is woven into our lives, sung upon our soul, written into our minds.

When I was a very small child, maybe four years old, I remember laughing at the slapstick of Albert Meltzer being stuck in our armchair. It was low, black wood with green upholstery. Albert, the enormous anarchist, had his plump hands on the velvet arms and was straining to extricate his bulk from between the turned spindles. But I was also alarmed.

How did I know at such a tiny age that the William Morris chair was special. Maybe the reverence for the genius was in the air of our sitting room. Or perhaps the child recognises the ‘madeness’ – the creative mind and hand, the life of a maker transmitted through the object.

At that age I was making continuously, and marvelling at what came out of me: ‘Look Mummy, I have written my name! Look Mummy at my picture!’

I have a portfolio of paintings from that age and looking at them I see my self that has never changed – they are a diary in form. This is the heart of William Morris: ‘Nothing which is made by man will be ugly, but will have its due form, and its due ornament, and will tell the tale of its making and the tale of its use’ (The Socialist Ideal: Art, 1891).

I have just finished reading Fiona MacCarthy’s William Morris: A Life for Our Time (1994, Faber and Faber, 800pp, £25), and visited the exhibition at the National Portrait Gallery. I discovered that Albert Meltzer wasn’t the only anarchist to destroy chairs. Morris himself was famous for writhing around and shattering them.

The exhibition ‘Anarchy & Beauty’ is an important contribution to pushing Morris’ radical politics and the politics of beauty to the front of the public perception of Morris.

To some extent he has suffered from the cleansing that I like to call ‘Wordsworth Tea towels’: the establishment can pull the sting of critical politics by attempting to sever the revolutionary from the ‘Daffodils’, or the Agitator from the wallpaper.

The problem for the elite is that powerful art and powerful beauty is born of meaning and often that meaning is a threat to the status quo. William Morris had an astonishingly clear eye not only for beauty but for political reality and possible futures.

He was a radical ‘moved to the soul by the troubles of the life of civilized man and the hope that thrusts itself through them’.

This exhibition tracks Morris’ political journey through aesthetics and craftsmanship. ‘How can we bear to use, how can we enjoy something which has been a pain and a grief for the maker to make?’

He immersed himself in production in the factory town of Leek where he became convinced of the need for a different set of relationships between worker/maker, product, environment and society.

‘Anarchy & Beauty’ is an illustration of Fiona MacCarthy’s wonderful, enormous and compelling biography. It is curated by her and follows the same trajectory as the book, which is a narrative of Morris’ intellectual life and his social and political influence on later generations. Being at the Portrait Gallery, there is a focus on the people in his life, on fellowship. ‘Fellowship is heaven’.

There was the fellowship of artists at the heart of his life: Burne-Jones, Rossetti, Webb among many others; and of the socialist and anarchist political thinkers and activists at the end of the nineteenth century. 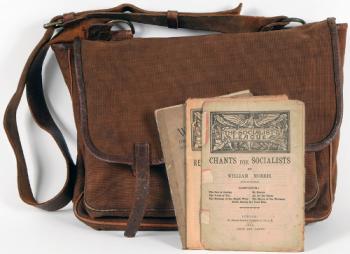 Fellowship led to community and Morris drew to him such a range of thinkers from Kropotkin to Oscar Wilde, Eleanor Marx to Bernard Shaw. MacCarthy’s biography is enormous because Morris’ life was enormous.

He was the driving force of the Socialist League, what Fiona MacCarthy calls ‘a working revolutionary’, speaking from soap boxes on street corners, organising, agitating, strategising. As author of Chants for Socialists as well as of The Earthly Paradise, he was regarded as an equal to Tennyson and was sounded out by the cabinet for the post of poet laureate. As a forceful anti-monarchist and anti-parliamentarian, he said no.

As an artist and designer, he gave birth to the Arts and Crafts movement, both visually and in terms of maker-based intentional communities around the world.

It was a life that so many people have taken meaning from.

When I was a little girl my favourite book was Robin Hood. I read it again and again. As a six-year-old, he was my great inspiration, but I had to leave out the last chapter because I would cry so much: how could Robin Hood die? I got to the end of A Life for our Time and I cried: ‘How could William Morris die?’

Understanding Morris’ life helped me shake off the idea that to be interested in many things is to be dissolute, or that beauty and politics and poetry have no business with each other. This exhibition and book have the profoundly important effect of helping one to live life better.

And one sees the responses to his challenge down the century: Terence Conran, elegant in his basket chair, shaping commercial design; Eric Gill taking the lettering and fellowship further; Clement Attlee taking society further with art and design underpinning a postwar future.

It is expensive to visit this show, and this could be viewed as a contradiction to Morris’ challenge: ‘What business have we with art at all unless all can share it?’. However, the William Morris Gallery is just up the Victoria line in Walthamstow, and that is free for all to share.

This exhibition is expensive but there is an importance to its location at Trafalgar Square. This is William Morris’ territory as much as Kelmscott Manor and Hammersmith were.

This is our country’s political heart where Morris spoke from the plinth on the Bloody Sunday of 1887, attended demos, witnessed police brutality, and where the revolution in News from Nowhere starts to bring about Utopia.

It is good to have a serious discussion of anarchist and socialist politics in a top cultural institution, especially where the word ‘anarchism’ is not sexified and it is not being turned into a tea towel or sniggered at. The discussion is about the seminal ideas that Morris planted in the mid-nineteenth century, the utopian ideas that had concrete practical manifestation throughout the twentieth; his visions that had such profound influence on the welfare state, on the Festival of Britain, on Art for All, on Garden Cities, on the preservation of our landscape and architecture.

However, that Tea towel still tries its hardest to creep in. Just cross the road towards Charing Cross and you will pass ‘Jigsaw’, a clothes shop which has an ‘Anarchy and Beauty’ clothes range using William Morris patterns.

If you go inside, past the sign inviting you to ‘Explore the range and see art meet fashion courtesy of this iconic British artist’, and turn up the bottoms of the dresses and jumpers, you will see the labels that say ‘Made in Turkey, Romania and China’. Let us hope that one day all clothing is produced in anarchist workshops where beauty and fellowship and happiness and dignity rule.