The limits to eco-villages 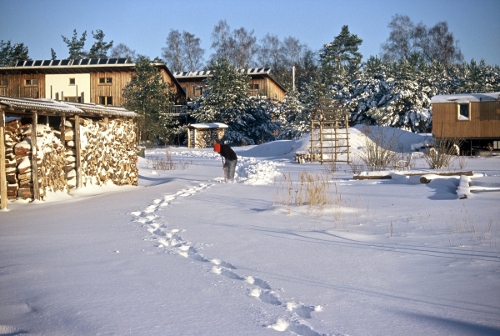 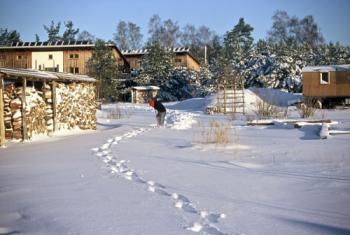 ‘I was a bit worried about the project of self- sufficiency, and how few differences there were between them and mainstream society’, said Leslie Barson, describing her recent stay at a prominent eco-village in Germany.

Barson spent a month taking a course at Sieben Linden, an eco-village formed in the late ’90s that is aiming to find a more sustainable and self-sufficient way of life. During her stay there, Barson noticed some troubling and conflicting traits that lead her to question how cutting-edge eco-villages really are. She concluded that there are three concrete problems with them.

Firstly, they are economically dependent on the outside world and surrounding community for resources, so they are not challenging mainstream economic models or modelling new ones.

Secondly, because people chose to live there – and can leave at any time – eco-villages cannot attract a variety of people without bending to the specific needs of their members, and sacrifice some of their ideology for the everyday comfort of the residents.

Finally, eco-villages are proud of being sites of experimentation with regard to different ways of living. However, as they are predominantly rural and often very different from each other, it is not clear that the lesson learnt through their experimentation can be used in other settings.

Eco-villages aim to construct a sustainable alternative way of living and conduct themselves in a way that finds solutions to the harmful and destructive practices that dominate society today.

According to GEN (the Global Eco-village Network), an eco-village is ‘an intentional or traditional community using local participatory processes to holistically integrate ecological, economic, social, and cultural dimensions of sustainability in order to regenerate social and natural environments’.

Barson found some faults with this focus. ‘I actually think that we have to think carefully about the project of self sufficiency.’ she said. ‘We don’t want to be on an island, so that we’re alright and you guys can go and starve to death. And anyway we couldn’t be like that, there’s always something you need from outside of your area.’

The aforementioned GEN ‘dimensions of sustainability’ are not being properly integrated. Eco-villages rely on regions around them for food and trade to support themselves. What they do produce is not enough to support everyone that lives on the site.

Half the people that did the course with Barson at Sieben Linden were supported by European Union grants. These courses are a huge income source for people living at Sieben Linden: adults living in the eco-village cook for the courses, teach the courses, and help out the visitors in a variety of ways.

So, Barson explained, if the EU didn’t give out any grants, if the EU had no money to fund people taking these courses, the people in the eco-village would be dependent on the wealthy participants who could afford to pay for the courses themselves to support them ‘and that’s not sustainable, and that’s not doing things a different way; that’s a mainstream business.’

Another conflict in the GEN definition of an eco-village is that ‘social and natural environments’ are not being regenerated, because not enough is really changing, as Barson detailed, ‘because they have to bring in new members, eco-villages have to be attractive, which means they can’t change the lifestyle too much. It can’t look that different from the mainstream or no new people will want to live there’.

‘If they really changed the structures, they wouldn’t get the people to go.’ Since the people that live in an eco-village first have to choose to live there, the sites have to be more than just attractive, and so they are often designed to appeal not just to the desire to be sustainable, but to personal, religious, and interpersonal ideals as well as a way to tie the community together.

Barson said this created a two-sided problem, as the eco-villages are ‘caught in this bind between having to make it nice enough so that people will be attracted to it and want to go live there, and making it different enough so that they are actually modelling some kind of different society’.

The way eco-villages operate works for the rural areas they are set up in, with mainstream society not far away to provide for them what they cannot provide for themselves. Barson says that this model isn’t going to change the world and save the planet – and it also is not going to change the way of living in cities, where the majority of people across the world reside, and where sustainability is increasingly most difficult to achieve.

As they currently exist, not as they are ideally meant to be, eco-villages work for a specific group of people in a specific setting in the short term, and not for the entire world in the long term, she suggests.

‘They claim to be sites of experimentation and change, that they can teach the rest of the world how to be better,’ said Barson. ‘I question that. They are so dependent on the rest of the world, they are not actually addressing the issues of changing our economic structures.’

In order to make real changes that can prevent a catastrophic alteration in our way of life, political, economic, and ecological activists need to work together where most people live, in the city, so that the massive changes needed can happen by choice now and not by circumstance later.

The Ecological Land Co-op believes that the creation of sustainable rural livelihoods is one of the best solutions to our most pressing environmental and social problems.

The ELC has been set up to buy land in Britain that has been, or is at risk of being, intensively managed and lease it to people that have the skills to manage it ecologically and who would not otherwise be able to afford do so.

The co-operative provides a renewable energy source, water supply, road access, and a shared barn made of natural and local materials, and then sells long-term leasehold agreements for the smallholdings at an affordable rate.

The ELC is a democratic membership organisation with three kinds of membership: investor members; worker members (employees and volunteers that work at least 15 days a year for the co-op); and steward members (ecological land managers). There is also a ‘supporter’ category.

Kim Golden is a US student reporter working with PN in London.

Leslie Barson is from www.londoncommunityhousingco-operative.co.uk/